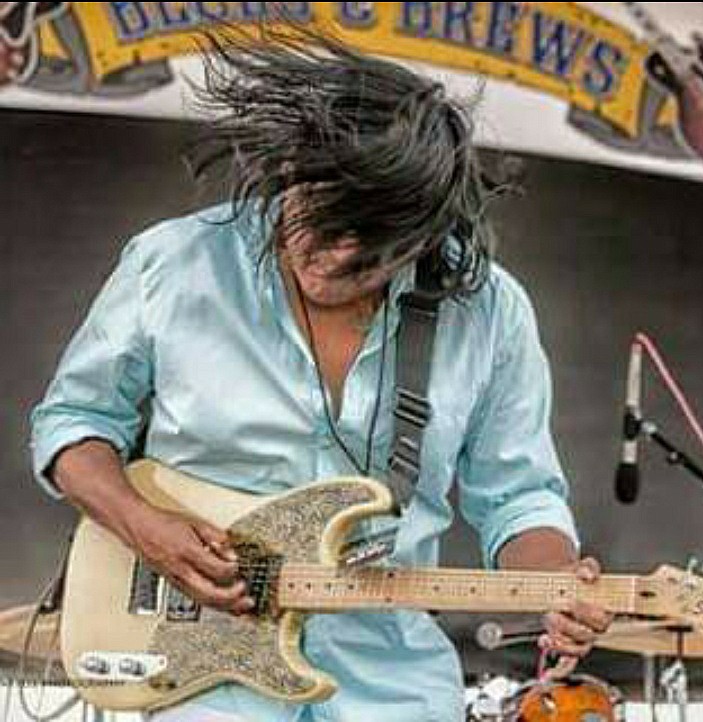 The Northern Arizona Blues Alliance covers Flagstaff, Prescott and the Verde Valley to promote, teach and advance blues through networking with fans, musicians entertainment venues, promoters, civic organizations and the community at large.

Sir Harrison serves as lead singer and lead guitarist. Everybody else in the four piece band supplies backup vocals along with their instrument specialties. Mahlon Hawk is on bass, Terry Anderson is on saxophone and David Gamboa is on drums.

“It was one of those things that we knew we could win because our band is so tight,” Sir Harrison said winning the Northern Arizona Blues Showdown.

Sir Harrision said he is proud to represent the NAZBA at the International Blues Challenge.

“I am happy about it because my family is from this area,” he said.

Sir Harrison said the upcoming IBC will motivate his band to move up the timetable on their CD so they can take it with them when they leave for Memphis. The plan is to perform gigs along the way to raise money for the trip as well as giving the band more exposure.

Sir Harrison’s Band CD is being produced in Flagstaff by his uncle Richard Neville--no relation to the Neville Brothers but a musician in his own right since he has played with Poco and Vince Gill.

The plan was for the CD to come out in three or four months, but with the trip to Memphis on the horizon they hope to have the CD done by then.

Sir Harrison’s Band played four songs at the NAZBA showdown. They played their original, “Heartbeat.” Then they played Tommy Castro’s “Don’t turn your heater down,” Robin Ford’s “Prisoner of Love” and Sweet Pea Atkins “Slow Down.”

The plan is to play all originals at the IBC.

“It’s a long way off, but I’m sure I’ll get nervous the closer it gets. We’ll have lots of rehearsals by then because we’ll be competing with eight and nine piece bands rather than just with four piece bands. But we’re going to have fun, remain confident and do what we do,” he said.

Some of the guys in the Blues Society advised them to keep it “bluesy.”

“That’s not what we do,” he said. “We never play a cover the way the cover is played. I do it my way with soulful tunes. That’s what makes me different and excited about IBC.”

Sir Harrison said his bands music is a mix of jazz and rhythm and blues, but it is blues based.

Winning the NAZBA showdown means the NAZBA will contribute $2,000 to Harrison’s band’s trip.

Sir Harrison has not done the budget for the trip yet, but it will probably cost three to four times that. He commends NAZBA for putting more in the pot than anybody else.

“We’ll have a lot of fundraising support,” he said.

Sir Harrison’s Band has been playing with most of these members for about three years. He has been playing professionally since 1999 with gigs in Flagstaff, Prescott, Sedona, Cottonwood and the Phoenix area.

More information about the Sir Harrison Band is available on Facebook or by email at hbekind@gmail.com