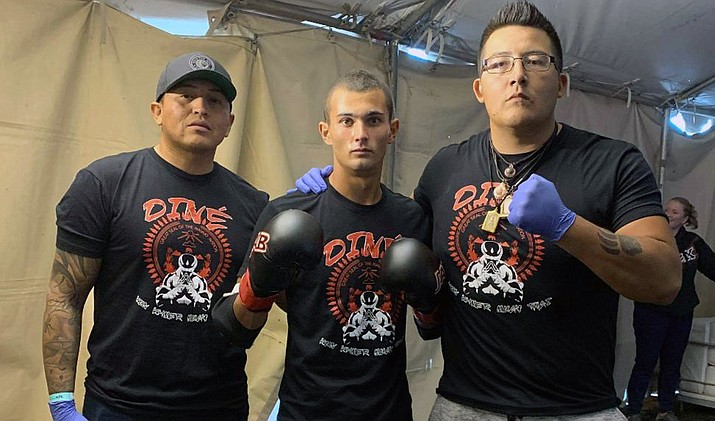 FLAGSTAFF, Ariz. — It was not the outcome fighter Mikel King or his swarm of fans had hoped for as he was defeated by Christopher Figueroa in the “Rumble on the Rez” Muay Thai heavyweight title fight Oct. 11 during the Western Navajo Fair in Tuba City, Arizona.

The fight went three rounds until it was stopped by the on-site doctor and the referee.

“The ref had noticed that there was something wrong with my eye,” he said. “So before the fight, I had injured my eye backstage.”

He explained that one of his cornermen accidently poured liniment oil in his eye and he sustained a burn that ripped one of his contact lenses. 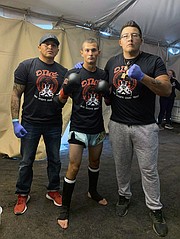 “My contact was stuck against my eye,” he said. “It had caused my eye to be burned pretty bad where I could not see out of it.”

He said that he was fighting with only one good eye but he wanted to continue to fight until the referee noticed that he was not protecting the left side of his vision.

King said at the end of the first round, he had also sustained a broken jaw caused by Figueroa, who had accidentally head-butted him in the clinch. It was the first fight between the two fighters.

Although he lost the title, he remains optimistic and is using the loss as inspiration to continue moving forward. For now, he is recovering from his injuries and plans to return to training for whatever fight comes up next. King said he has his sights set on regaining the title next year.

Leading up to his fight, he was also busy training a few up and coming fighters. One students was DeAngelo Steginks, 21, from Rare Metals, Arizona, by way of Colorado. Steginks fought Friday in the undercard in the 150 pound division, which is the light weight division, against Daniel Nunez of Phoenix.

“He won by first round knockout against a very experienced opponent who had a year and a half of training and [Steginks] only trained with me for three and a half weeks,” said King.

Steginks said he felt great about the first round knockout and he knew that he would win the match.

“I put in my time and work, I gave it everything I could,” he said. “I was told this kid was training for years and I thought I was going to have more of a fight?” 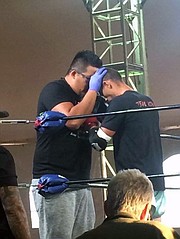 Steginks is no stranger to the ring. He has been fighting since the age of 15 and has fought in MMA (mixed martial arts) in Colorado.

He said he was nervous in the days leading up to his fight.

“I was a little bit nervous but I felt calm,” he said. “I felt ready and I knew I was going to win.”

With the win still fresh, Steginks said he is looking down the road for a title shot.

“I do want to further my career in fighting,” Steginks said. “But as of right now, I am going to be leaving for the military soon. I ship out in January.”

Although he is enlisted in the Navy, Steginks said he wants to continue training where he can and thanked Mikel King for helping him to train.

“I think he did a good solid job. His communication is pretty good, his one-on-one lessons are really spot on, he pushes you and he did a great job,” he said.

King is extremely proud of Steginks and is looking forward to some upcoming training sessions with him.

“I had a pretty good go around with my first student,” he said. “That is pretty impressive with just a few weeks of training.”

So what is next for Mikel King? He plans to continue training students and hopes to leave Tuba City with another champion in Muay Thai before he moves to the Valley-area or back to Washington State. He also plans to travel to Thailand sometime next year.

“I fought with a broken jaw for two rounds and fighting with one eye throughout the whole fight,” he said. “It just goes to show the heart and determination of a Native American warrior,” he said. “Whatever is thrown at us, we can adapt, we can adapt and overcome and fight through the harshest times in life and in the ring — if it’s worth it to you.”