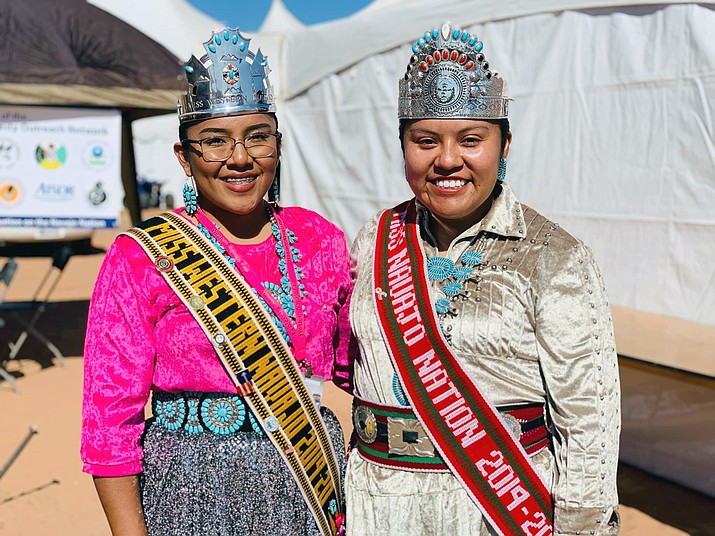 There were only two contestants that vied for the title, the other contestant and first runner-up was Shaynee Bileen of Tuba City.

Dougi, 19, lives in Tuba City and is originally from Howell Mesa just east of Coalmine Canyon. She graduated in May from Greyhills Academy High School.

“I’m very excited to be your new Miss Western Navajo,” she said. “I will do my best to represent myself, my family and my community.”

Dougi is excited about what the reign has in store.

“It is one of the most prestigious reigns or titles that I am going to be holding,” she said. “I am really excited about what this year has in store for me.”

She explained the pageant was only one day and it was quick. All sessions were held in the morning and it was over in less than three hours.

“They won the war using our Navajo language,” she said. “I want people to encourage each other to learn more and speak more of our language and not let it die.”

For her talent, she sang a Navajo veterans song also in memory of her late paternal grandfather. And for good measure, she sang a second song which was the Western Navajo Fair song.

She said she is not a fluent Navajo speaker but is working on it every day.

“My Navajo is getting better and better as the days go by,” she said. “On a scale of one to 10, I am six or seven but I understand Navajo fully.”

During her reign, she plans to promote Navajo language preservation.

“I want to encourage our younger generation to learn more and speak more of our native language,” she said.

Her main platform is to promote the increased use of seatbelts and car seat safety.

“I’ve been part of the car seat and seat belt [safety] initiative since I was in first grade,” she said. “Since then, I’ve just been promoting the use of seat belts and car seat safety. There are many deaths that occur here on the Navajo Nation from improper use and I want to help educate people of how to properly use them. “

“It can make your trip a lot safer, even if you are just traveling down the street,” she added. “You never know what can happen and it’s better to always be safe.”

To help promote her message, she has partnered with the Office of Environmental Health at Tuba City Regional Health Care Corp. She said that program conducts monthly classes at various locations across Western Navajo. They teach about various types of car seats, selection of car seats, installation of car seats, how to properly secure your child and the Navajo Nation laws relative to seat belt and car seat use.

“We set up booths somewhere in the community to do car seat checks,” she explained. “We check [car seats] and make sure they are inserted properly and all the safety gears are attached.”

She said that as an ambassador of the Navajo Nation, she feels it is her duty to help protect her community and to ensure the safety of people within the 18 chapters of western Navajo.

She is confident her reign will be successful and she is very thankful for her support system.

“I know with my family’s help, I will make this year’s reign a great one,” she added.

This is her eighth title, so she has some experience under her turquoise and silver concho belt. She said she is comfortable with making appearances and with public speaking.

She said her schedule is starting to fill up with invitations for presentations and appearances. She can be contacted at (480) 734-7939 and by email at dougimaegan@gmail.com.