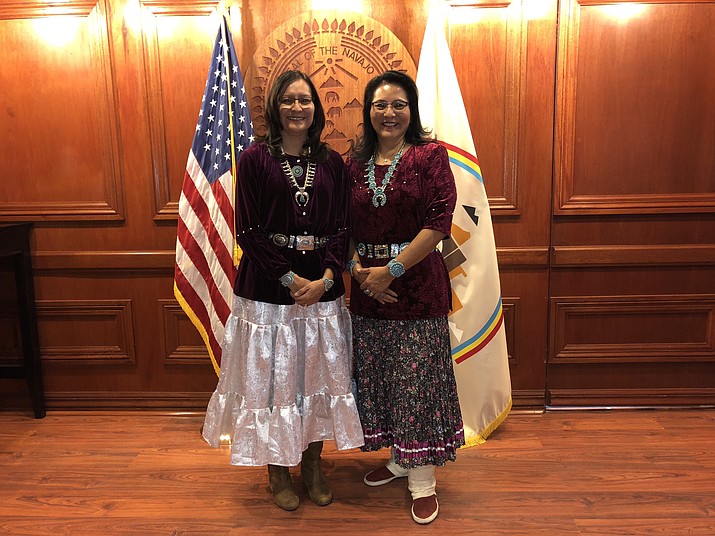 First Lady Phefelia Nez (left) was appointed to the Missing and Murdered Indigenous Women Task Force in New Mexico and Second Lady Dottie Lizer (right) will also help work with the state of Arizona’s study committee. (Office of the President and Vice President)

In March, Gov. Grisham signed N.M. House Bill 278 into law to establish a task force to investigate the epidemic of missing and murdered Indigenous women in the state of New Mexico. Nez will assist the task force in assessing and determining how to increase state resources for reporting and identifying victims.

“Throughout our country, we hear far too many stories of families and victims who experience this traumatic epidemic of missing and murdered Indigenous women and girls, and we need to put a stop to it, and it begins with collecting and analyzing the data,” Nez said. “Together through partnerships, we need to be proactive to protect our Indigenous women and children.”

In her new role, Nez will have the opportunity to work with state and federal officials, tribal members, and advocates to collaborate with tribal law enforcement agencies to identify barriers to improve the reporting, investigating and data collection of missing and murdered indigenous women.

“The issue of missing and murdered Indigenous women and children has not received adequate attention, which had led to a shortage in data that contributes to the ongoing problems, including the lack of prosecution and lack of coordination among local, state and federal law enforcement. As leaders, we need to be the voice for our women and children,” Lizer said.

To move efforts forward, the Office of the President and Vice President has also established an internal workgroup known as the “Diné Nihik’éí Nihíí’ Násdłįį’: Work Group, Reunite our Diné Relatives,” led by Nez and Lizer to address issues and concerns related to missing and murdered peoples and social ills impacting Navajo families, including Navajo men and boys. Most importantly, the focus is to heal, restore and reunite Navajo families.