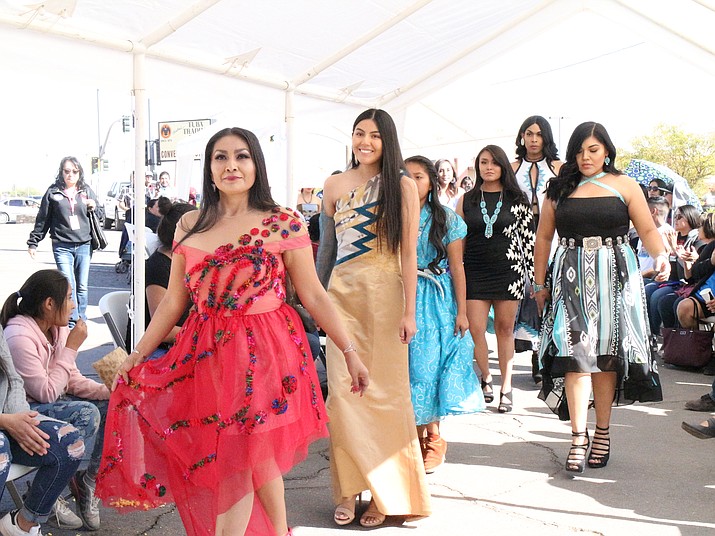 The last walk did not disappoint fans as they were given a front row look at the evolution and the future of Native American fashion.

Troi Whitethorne, show coordinator, will bid the Tuba City area farewell as he moves to Utah to concentrate on his art.

"'One door closes, another door opens’ or as they say ‘the show must go on,’” said Whitethorne when asked if he will coordinate other fashion shows.

“I want to paint more. One day I may open up a new runway on the Utah side of the Navajo reservation, maybe Santa Fe or… Tokyo. I’ve been fortunate to see so many designers and models walk their first runway with me, it is my fondest memory to watch them grow and see how far they take their potential, to see them reach a dream of walking in New York or Paris,” he said.

Whitethorne is known for his welcoming attitude. He kept the show free to all as a way to support artisans of every caliber. He has always been held in high esteem for his no nonsense and drama free backstage.

“I just see the whole show in my mind and I don’t let anything get in the way of that,” Whitethorne said.

He can see who had the drive to want the chance to promote themselves.

“They had to be hungry for it. If I see that dedication, I help them out,” he said.

The runway showcased over 75 dresses from collections that raised the bar on Native American fashion through evolution of creative talent. The new Native American couture designs proved that designs are no longer bound to just traditional/contemporary style. Instead the audience witnessed a fusion of bold artistic ideas that embraced all Indigenous cultures.

Premier designer Jennifer James from Shonto, Arizona has graced the covers of many Native American based magazines. She brought a look and style she describes as a fusion of wearable art that blends modern/traditional with metal/goth.

“I like the darker look so I make clothes like that in all styles. At the We are the Seeds fashion show… we had the opportunity to use other materials like cut out plastic or metals and I was inspired to continue using that,” James said. “Now I use mesh [plastic], spray paint, and yarn.”

James premiered 30 pieces of stunning designs that rocked the crowd to a standing ovation.

“I don’t think of myself when I make the clothes, I think of the people I work with who will be wearing it. It feels good to help others succeed.” James said.

“It is sad to know this is the last show. Troi has always been good at organizing the show, he has good communication with the designers because he feels the same about art. We are supportive of each other and I like that,” James said.

James is ready to take her label, JJamz Designs, back to Sante Fe then New York.

Premier designer Cynthia Trujillo from Fruitland, New Mexico launched her label last year and then pursued her dream to the runways of New York Fall Fashion Week. She knew that she had to find her creative peak for New York and she premiered that collection last weekend in Tuba City, including a homage Red Dress for the Murdered and Missing Indigenous Woman movement.

“I pushed myself to go all out for New York but now I know it wasn’t the highest level I could go. Now my imagination is coming alive,”

Trujillo said. “The Red Dress is made with the floral scarf florets that line the veins that go to the heart. I did that because the women who are missing are always in our hearts, I wanted that to be known.”

Trujillo laughed as she remembers how she began. “I started as a young girl sewing clothes for my Barbie dolls.” Her hope is that she will return to New York.

Mae Mallahan, a veteran designer to the Sacred Native Fashion show incorporated a more traditional flare to the runway. She has since made designs to hand stitched jean jackets and tote bags made with the ‘Masani floral scarf’.

“I enjoy [making] traditional/contemporary clothes. I recently made a Navajo Jingle dress in the [style] of the layered traditional skirts with material that [inspired] me. I am a mother and grandmother so I make clothes for young girls,”said Mallahan happily. She teamed up with jewelry designer Marc Arviso to bring out the full effect of her clothing.

Shannon Tallsalt made her debut with her Salt Alta designs with cloth she has collected from her travels across the country. Her designs blended the cultures she has visited with modern styles that is elegant and fun. She is inspired by her own Navajo/Mexican heritage and her nieces who participate in ballet and rodeo.

“I made clothes in college… but while in Massachusetts a few years ago I got stuck inside for a week during the third worst storm. I had my sewing machine and I started making clothes again. I put it on Facebook and made a joke that I was taking orders and they requests flooded in.”, she said with a proud smile.

The final showcase was Crystal Dugi’s fun collection of t-shirts. She hand painted t-shirts that celebrated the empowerment of women. She had the daughters of the models to wear the collection on the runway which the crowd loved. Many people already know her signature ‘woman with a Navajo bun’ shirt.

“I hope to move into other types of fashion… but I use this as a form of healing art as well,” Dugi said with a humble smile.

The designers and models have made a strong bond and they feel as though they are more of a family rather than just colleges. Saying goodbye was not easy. However, since Whitethorne began the Sacred Native Fashion shows many other fashion shows have popped up across Arizona. Whitethorne hopes a designer will pick up the baton to continue what he started.

In attendance was: jewelry designers; Marc Arviso, Rochelle Chee, Natalie Rivas; Richard Dean with DJ services from Shonto, Arizona; royalty both past and present, ranging from Miss Navajo and the current Miss Two Spirits and models who have graced the world’s runways.

Navajo Nation President Jonathan and Vice President Myron Lister were special guests escorted their first ladies and Miss Navajo through the closet of the fashion show before it began.

Ella Manygoats, coordinator for the Navajo Museum, has been with Whitethorne since the beginning and doesn’t believe it is over.

“I am sure I will get the call from somebody next year saying they want to have the show. They will call. If they don’t then I will believe it.”