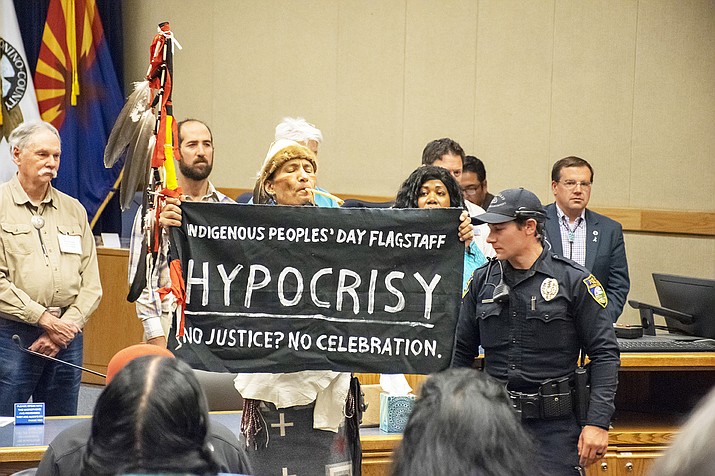 FLAGSTAFF, Ariz. — Klee Benally, a local activist, stood alone in front of the Flagstaff City Council and a crowd of people who had come to celebrate Indigenous Peoples Day Oct. 14 in the city of Flagstaff council chambers.

But as his protest continued, holding a banner that said hypocrisy, blowing a whistle while Mayor Coral Evans read the Indigenous Proclamation into the record, Benally started speaking about why he was there protesting the day, they were not new issues and he was not alone.

In fact, the issues Benally spoke about were the same ones he brought to former City Council Delegate Eva Putzova when she had

originally brought up the idea of an Indigenous Peoples Day and why the celebration had been put off.

The Indigenous Circle of Flagstaff was born out of those talks: a grassroots group that would get together with the city and discuss and come up with solutions to some of the same issues that are ongoing between the city of Flagstaff and Native people.

Some of those issues are: the city selling reclaimed wastewater to Snowbowl over the opposition of the tribes in the area, the unsheltered people who, Benally says, the anti-camping ordinance in Flagstaff targets, the cycle of profiling Native people, putting them in jail and then when released, a requirement to stay within a certain radius of the city, which essentially makes them homeless.

“Snowbowl, the 180 million gallons of treated sewage, if you renounce that here, then we can celebrate,” Benally said during his protest. “If you end racial profiling against our people and repeal the anti-camping ordinance, then maybe we can celebrate. But today, we can’t celebrate because Indigenous Peoples Day is about what? Justice and human rights for our people, but this is hypocrisy.”

Benally said standing for human rights means taking action now and human rights and justice does not happen by taking one day out of the year and making vague promises.

“I’ve worked with them for more than 20 years and they’ve ignored us,” Benally said. “They leave our people out in the cold to freeze, they criminalize them, they shoot our relatives…” Benally said. 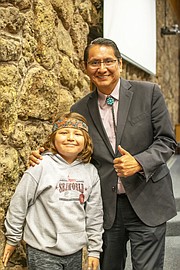 Many in the crowd applauded and agreed with his words and many of the Native speakers called attention to the same issues. They spoke about both individual instances of racism directed at them in the city of Flagstaff and the broader issues where indigenous voices are ignored.

“The fact that we have people protesting means that we are not done yet,” Evans said, acknowledging, but not responding specifically to any issue. “Without a doubt, a proclamation and a celebration does not fix historical trauma and this celebration we are having here today is not meant to do that. It’s not meant to ignore the issues we have.”

Evans said the day’s purpose was to come together to work on those issues because “if we cannot come together in a simple celebration of food, over culture, over music, then we will always have a problem trying to fix the major issues we have.”

And, there was food, music and dancing, lots of it. The many Native and non-Native people did celebrate honoring indigenous people instead of Columbus Oct .14.

Part of the day’s celebration also included Ed Kabotie who spoke at the Museum of Northern Arizona, giving an AlterNative History of America.

The history he gives is concentrated on Hopi and Pueblo Nations. And Kabotie said the presentation he gives is designed to challenge a few ideas of the greater culture’s concepts of American history.

“The greater culture refers to July 4, 1776, as Independence Day,” Kabotie said. “Our war for independence took place 100 years before the American Revolution. Aug. 10, 1680 is what we acknowledge as our Independence Day. This is Pueblo Freedom Day. This is the day our people… and I says this with humility and in acknowledgement of the struggles of Native American people in the Americas, we became the only Native American people in all of documented history to oust an established European colony from our homeland.”

The presentation is available at https://www.youtube.com/watch?v=x-IR6CkOi7U.