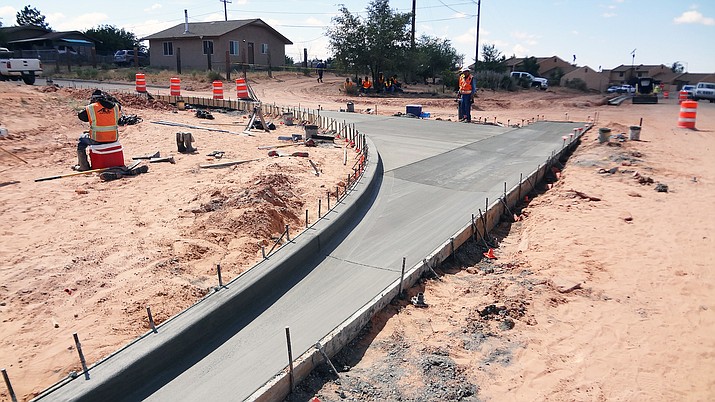 TUBA CITY, Ariz. — A portion of “Pothole Alley,” also known as N608 or Peshlakai Road, in Tuba City was recently improved thanks to collaboration of several entities at a price tag of more than $1 million.

On Oct. 2, the Navajo Housing Authority held a ribbon cutting ceremony to officially open 1,100 feet of rehabilitated road that had been neglected for decades. The road rehabilitation was made possible through a partnership with NHA, the Navajo Nation, the Navajo Division of Transportation, the Bureau of Indian Affairs and the To'Nanees'Dizi local government.

According to Velma Maloney-Begaye, a council member with the To'Nanees'Dizi local government, it took more than 20 years for this small portion of road to be fixed.

For years, local community members advocated for the improvements to the road, which caused damage to their vehicles and an unpleasant ride. The road is a major artery to the major

streets of Edgewater Drive, Warrior Drive and onto Hwy. 160.

She explained the advocacy for the road improvement began with

people who live in north Tuba City who drove the road daily.

“[People] tried avoiding the pot holes, it was next to impossible and their vehicles required wheel alignments more often than recommended,” she said.

She said one individual took the initiative to gather signatures for a petition to fix the road and she presented it to the local chapter several years ago.

She said another group led by Marlene Goldtooth took matters into their own hands and began purchasing gravel to fill the holes as a temporary fix for several years, but the road would always revert back to pot holes shortly after.

“Marlene’s brother owns a tractor, which was used to grade the road and fill the holes,” she explained. “Many individuals donated funds for the project. Relatives of the Goldtooths were able to obtain gravel for a fee and this is what was used to fill the holes.”

Despite advocacy over the years, not one entity would claim ownership of that particular section of road.

Otto Tso, Navajo Nation Council delegate who represents Tuba City, said many previous leaders addressed the situation but various entities did not want to work together and that caused the delay in fixing the problem.

Tso said he made several trips to NHA advocating for the road improvement and he also did a presentation to the NHA board in 2015. This presentation, along with previous advocacy of former leaders, pushed NHA to finally accept responsibility since the road is adjacent to a couple of their housing compounds.

“NHA finally realized that it was their responsibility to fix the road because of the land withdrawals that were in place — it directly tied them to be responsible,” Tso said.

Tso said the NHA funds were secured in September 2017 and the planning process began. He said the funds were non-program funds collected from public rentals and not federal dollars. 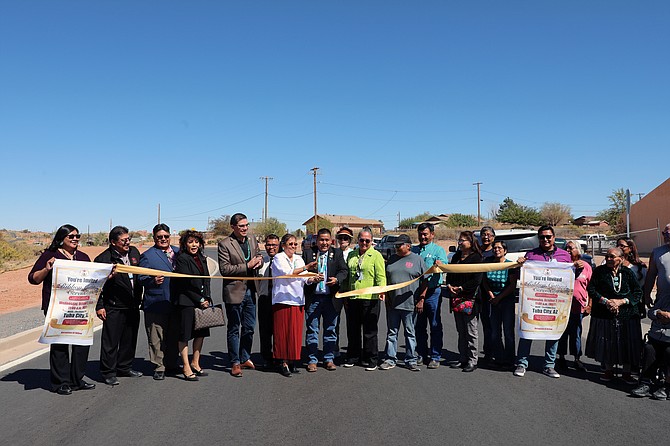 Despite delays caused by the BIA and right of way issues, the project began Sept. 24, 2018, and it was completed in less than a year.

“I am just grateful that [the] road is completed and we accomplished something,” Tso said. “This is a great accomplishment and it’s finally [fixed].”

According to NHA, the project was funded in the amount of $970,827. This amount included the demolition and replacement of 1,100 feet of existing street asphalt including concrete curb and gutter. The project also included street grading and the installation of culverts for proper water drainage.

Tso said the local chapter contributed approximately $130,000 of sales tax dollars that is earmarked for the completion of the sidewalk. For now, the sidewalk is filled with gravel.

Several community members expressed their appreciation for the road improvement but hope the rest of the road is also repaired.

One community member, Harlan Barlow, said he avoided using N608/Peshlakai Road because of the potholes.

They need to focus on the whole picture,” he suggested. “I can’t imagine the wear and tear of our school buses that go down Main Street and Warrior Drive near Greyhills [High School] — [and] also your own vehicles.”

“It’s fun to drive on [the road] for a minute, then it’s back to rough roads again,” she said. “People I’ve talked to said it was silly to have a celebration when there is so [many] other roads that need repair. After that, we should celebrate [and] I agree with them.”

Renee Archambeau said they could have gone another 50 feet and filled those remaining potholes.

Tso acknowledges the remaining section of the road that also needs road rehabilitation and said it will take another similar journey to get that section repaired. He admitted that that particular section involves some of the same entities with the addition of the Office of Navajo and Hopi Indian Relocation (ONHIR).

He said that is another project he is working on.