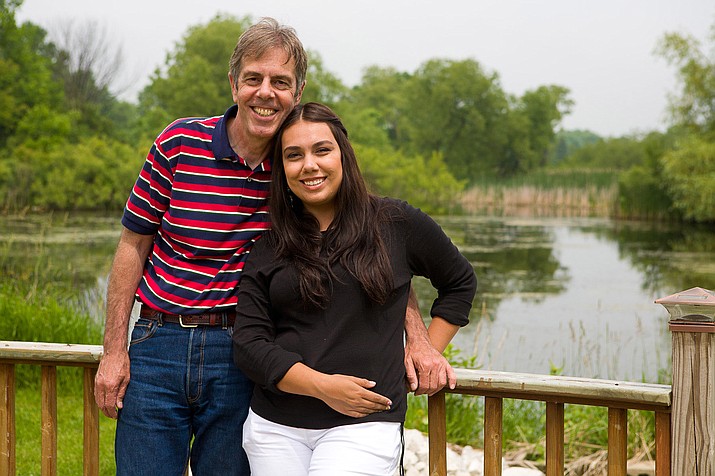 Gilman was teaching social studies at Winslow Junior High School for the past four years after almost 30 years at Hopi Jr/Sr High School.

Celeste Gilman, Glenn’s daughter, said listening to people’s thoughts in person, on social media and at the funeral let her know that her dad left a legacy.

“He empowered students both at Hopi and Winslow as he helped many realize their potential,” she said. “Part of his legacy was he was able to relate to people. He was personable and he had a deep respect for other people’s cultures.”

Celeste said her dad had great hope and drew satisfaction when he saw others succeed. She said he had incredible dedication, a great work ethic and innovation.

“He inspired many students and administrators to have great expectations for themselves,” she said.

One Hopi told her that Gilman was a leader. She said his humor separated him from others because he loved to joke around.

“You knew where he was coming from and he rooted for the underdog because he was an underdog,” she said. “He found a way to be a rebel. But he was organized and intellectual. How he did it was beyond me. He was brave and influential.”

Jeremy Baudette Sr., Glenn’s son, said his first memories of his dad were in Seattle where they would take trips to Pike’s Market. He said the learning started early because Glenn was so tall and would carry him on his shoulder. They later relocated to Arizona where they would have many tours growing corn, squash and other plants.

Jeremy said that between the irrigation of the field, Glenn started his educational career as a substitute teacher. Then they moved to the reservation where Glenn had his most influence and Jeremy had him as a math teacher, so the other students dubbed him “Little Gilman.”

Herman Gilman, Glenn’s older brother, recounted how they grew up together in Milwaukee, Wisconsin, where they shared bunk beds for their first seven years and the parents referred to them as “the boys.” The family was tight knit as they played card and board games. This competitive tradition continued into their adult lives.

During their many travels, Glenn would tell Herman about his Hopi Jr/Sr High School students and during the past four years about his students at Winslow Junior High.

“I was fortunate to visit the Hopi community twice and see many of his student’s achievements. When we went on road trips in recent years, we talked about his social studies curriculum,” he said.

The Gilman brothers attended the University of Wisconsin, or ‘UDub’ as they referred to it, and they both were loyal to following the sports teams there. The brothers often journeyed to Phoenix for the spring training baseball games.

Herman also recounted Glenn’s love for cooking as he worked his way through college as a chef in a steak house and was known by his friends for his steaks and cheesecake.

“But what I remember the most about Glenn was his dedication and vision that he brought to the academic arena. He worked long and hard to setup opportunities for the students,” Herman continued. “Every year he sent out a calendar that had Hopi artwork for each month.”

Herman said he could not close without mentioning Glenn’s humor.

“If you were a bit sluggish, he’d look at you and say ‘c’mon now, Darn it,” Herman said.

Jennifer Gilman, one of Gilman’s two sisters, saidGlenn had sparkling eyes and they both shared the same smile. She said Glenn had intelligence and empathy because he had an interest in people.

“He was a humanitarian,” she said. “He took an interest in everybody and he was a good listener.”

Rose Corso, Glenn’s oldest sister, said Glenn was the fourth child and the youngest. She remembers when he was born that she was proud to hold him. She said as the youngest he was babied by his older sisters.

He was often found sleeping under the kitchen table.

Jennifer said Glenn and Herman often battled, but as adults they became best friends. She said Glenn had a mischievous side so this is what attracted him to teaching junior high and high school students.

“He could empathize with those like his younger self, and having experienced success as a teacher, and later as a principal, he encouraged them to live up to their potential,” she said.

Jennifer said Glenn had a deep appreciation for Hopi art and culture.

He was proud of the art his students produced because the culture was ingrained in it.

“Glenn reached the end of his road too soon. But his road was a road well taken,” she said.

Jennifer spoke about how Glenn was proud of his daughter and son. She said Glenn was a good son, a wonderful brother and a loved father.

“Gilman was a great supporter of our cross country program every year.

He was at all the programs and all the events at Hopi High. He brought the community together,” he said.

Baker said Gilman was a great guy who was well liked by the students, teachers and community.

“He was an honest guy who made the school better not just for the reservation, but with Winslow and Flagstaff. We all bought into that vision,” Baker said. “He understood the traditional values of the kids and left a legacy that’s hard to replace.”

“Gilman would promote the school in the community,” she said.

Debra Baker also recalled how Gilman would show up to visit the families when students died so he could console the families.

“That spoke more than words. That was meaningful to the families,” she said.

Laurel Poleyestewa, a governing board member at Hopi Jr/Sr High School, said the school board sends its condolences to Gilman’s family and friends.

“We appreciated his work with our Hopi students, families and community. He will be greatly missed, Poleyestewa said.

Patrick Secakuku, former business manager at Hopi High, recounted how he worked with Gilman for many years. Gilman taught at Hopi Junior High from 1987-96. Gilman, who majored in broadcast journalism at the University of Wisconsin, started the Bruin Times newspaper and the yearbook at Hopi High. He served as junior high principal from

“As seen by our Hopi community, Mr. Gilman had many positive and encouraging impacts on our native youth,” Secakuku said. “Everyone saw how he cared about our youth and that he wanted each and every student to be successful. His dedication as an educator was evident. He attended all school functions and was at every cross country meet cheering on the Bruins.”

Secakuku, who knew Glenn as ‘Gman,’ said Gilman will be an ongoing inspiration to many students, parents and the community.

“Mr. Gilman you are truly an amazing legend,” he said.

Nona Edelson, an English teacher at Hopi High, said she never knew someone like Gilman who gave so much to a community and school.

“He really cared and his professional life was so much of his life. It seemed like he breathed his job. That was his sustenance,” she said.

Valerie Martin, librarian at Hopi Jr/Sr High School, said it was great working with Gilman when she was yearbook teacher because he knew everybody in the community. She emphasized that he was a great cook sometimes bringing seafood from Mexico or cooking Thai food.