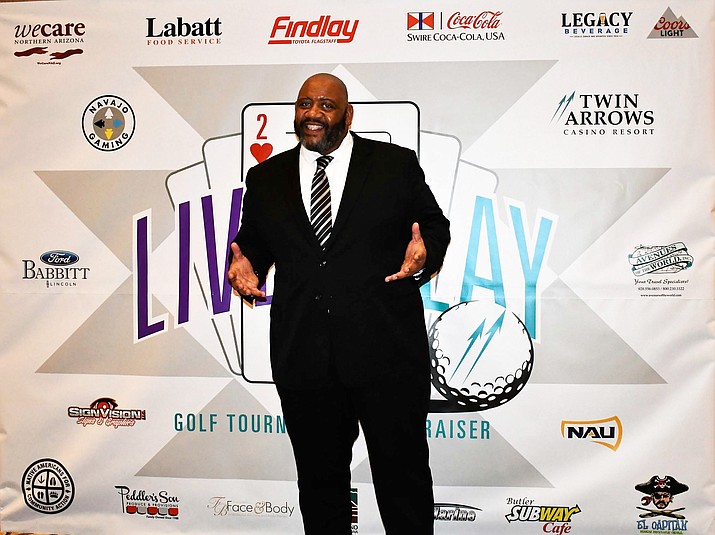 TWINS ARROWS, Ariz. — More than $55,000 was raised Sept. 19-20 in an effort to increase awareness of doubling rates of suicide in Northern Arizona.

The fundraising event was a partnership between Navajo Gaming, Native Americans for Community Action (NACA) and We Care Northern Arizona Foundation (NAZ). This was the first Live 2 Play FUNraiser for the groups, which included a golf tournament, silent and live auctions, dinner and guest speaker Bubba Ganter, a Hollywood actor, Flagstaff local and survivor of attempted suicide.

“Suicide has become an epidemic in northern Arizona,” shared Clay McCauslin, We Care Foundation NAZ Founder. “Navajo Gaming, NACA and our team at We Care NAZ know that suicide prevention takes a community and are eager to continue connecting teams of partners throughout northern Arizona so that training and awareness about the growing epidemic will be enhanced.”

From 2009 to 2017, Coconino County Sheriff’s Office reported a 140 percent increase in calls for mental health and suicide related issues. They also reported that suicides of Coconino County residents has nearly doubled from 23 in 2016, to 45 in 2018.

“Suicide is a difficult tragedy to discuss, yet it is important to remind others struggling that they have support. An entire community is working together seeking solutions,” said Brian Parrish, Interim CEO of Navajo Gaming.

The highlight of the evening was guest speaker and actor Bubba Ganter.

An outstanding Coconino High football player, Ganter was awarded a full ride college scholarship when injuries cut his football career short. Later he entered the entertainment business as a bodyguard, first for Dolly Parton, then Milli Vanilli and later for New Kids On the Block’s Jordan Knight. From there he made appearances in music videos and later acted in films such as “A Texas Payback,” “Unsolved Mysteries,” and “Soldier’s Story.” More recently Ganter has been a regular on Nickelodeon programs such as “Game Shakers” and BET’s “The Family Business.”

Ganter became involved with We Care NAZ through his personal struggles and attempted suicide, and now volunteers time to share his story with local schools.

“Fame and money do not make you happy,” Ganter said. “Every day I strive to help someone else through depression or suicide attempts. As I talk with these kids, I break down. No kid should have to go through the thought of taking their life.”

“It takes people like you, to attend events like this, to bring awareness to depression and suicide prevention,” Ganter added.

“Let’s work to reduce the stigma surrounding mental health awareness and become a voice of hope to people of all walks of life so they know as a community, we care,” said Navajo Gaming Board of Directors Chair Quincy Natay.

All proceeds from the event benefit We Care NAZ and NACA as they work to prevent the growing epidemic of suicide in northern Arizona. One hundred percent of contributions from the event will expand services to those in need.

Additionally, We Care NAZ is working with Coconino County, NACA and surrounding communities to place over 150 reflective signs in highly visible locations (benches, parks, businesses) that include the National Suicide Prevention Lifeline (1-800-237-8255) and Crisis Text Line (741741). These “Buddy Benches” throughout the community offer immediate support for those struggling.