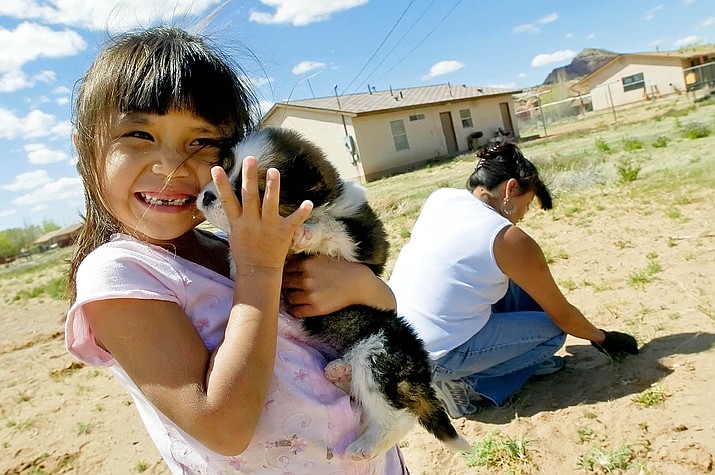 In this 2007 file photo, Cheyenne Yazzi hugs her puppy while her mother, Selina, pulls weeds in their backyard in Churchrock, N.M. Activists are using virtual reality technology to focus on areas of the Navajo Nation, like Churchrock, affected by uranium contamination. (Brian Leddy/Gallup Independent via AP, File)

The arts collective Bombshelltoe has collected 360-degree footage of land near Churchrock, New Mexico, to show how people and the land have changed since a 1979 uranium mill spill, the Gallup Independent reports.

The film, titled “Ways of Knowing,” was directed by artist Kayla Briet.

“Sunny asked us during this meeting, ‘Where is your heart?’ And it caught my - along with everyone else’s - attention,” Umayam said.

In 1979, a dam on the Navajo Nation near Church Rock broke at a uranium mill’s evaporation pond, releasing 94 million gallons of radioactive waste into the Puerco River.

It was the largest accidental release of radioactive material in United States history and three times the radiation released at the Three Mile Island accident.

The radiation contaminated not only water but the food chain. Cattle in western New Mexico later showed higher levels of radiation.

Dooley, who lives in Chi Chil Tah, New Mexico, said she has felt the direct effects of the big spill that went down the Rio Puerco and contaminated the water and soil in her community.

During a recent presentation of the virtual reality footage, Dooley talked about her daily life of not being able to have running water in her home because it is contaminated. “I have to come to Gallup to get my water and take it back home,” she said.

Umayam said the group wanted to use the new technology of virtual reality with the stories to bring a true experience and show the impact of uranium mining.

She said the project is close to being finished, but with every presentation they get more information and make tweaks to the system.