Out ‘n about: Woodchute Trail offers adventure, exploration near Jerome 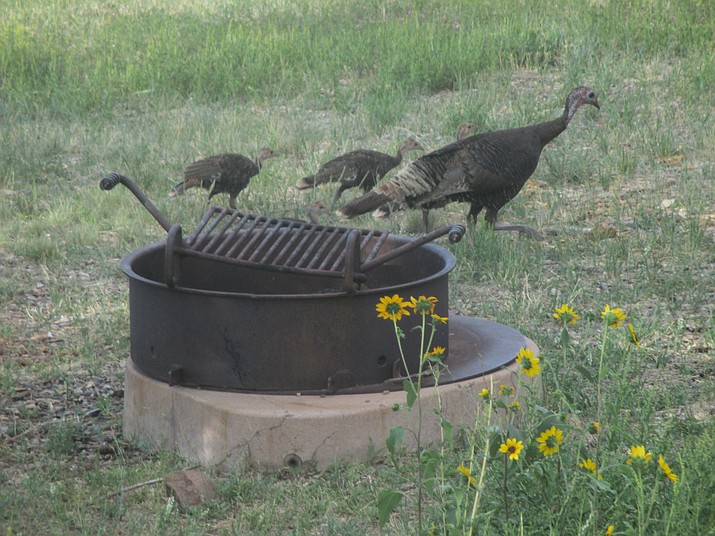 The Woodchute Trail is located on 89A off Forest Service Road 106 near Prescott Valley. (Stan Bindell/NHO)

PRESCOTT, Ariz. —This was scary enough to make the hair stand up on my back. The sound was electric with an added hissing. Since I was near electric lines, I thought the sound was related to that.

I was far enough way, about 10 feet, so it may not have been able to strike me. I just kept walking. I didn’t get closer to see if it was a rattlesnake or another type of snake.

This happened just after dark one night when I was walking down the Forest Service road from Woodchute Trail.

This is just one of the creatures you are likely to see if you are on or near the Woodchute Trail. Deer and wild turkey have come within 10 feet of me near the trail.

Bear droppings are plentiful along the trail. One hiker told me he was on the trail with his four dogs when he came within 50 feet of a bear.

I’ve also seen gray foxes near the trail and rock squirrels on the trail. For those who like wildlife, you are likely to see something.

Walking on the Forest Service road into the Woodchute Trail is great because you pass by Powerline Tank Wildlife Area, which protects a pond and a beautiful meadow for the wildlife.

The scenery on the Woodchute Trail is amazing for those who like looking at mountains. The San Francisco Peaks, Bill Willliams Mountain, Kendrick Mountain and Granite Mountain as well as the Mogollon Rim are among the views from different parts of the trail.

Sedona, the Verde Valley and Highway 89-A can all be seen below parts of the trail.

The Woodchute Trail is up over 7,000 feet so it’s cooler than most Arizona locations.

The Arizona Wilderness Coalition defines wilderness “areas where the earth and its communities of life are left unchanged by people, where the primary forces of nature are in control, and where people themselves are visitors who do not remain.”

The Woodchute Trail is also part of the Great Western Trail, which meanders through five western states.

The trail, part of the Woodchute Wilderness, is a little more than seven miles roundtrip. Those looking for more mileage can hook into Rick Tank Trail or Martin Canyon Trail.

The Woodchute Trail starts at about 7,000 feet and slowly climbs about 825 feet. The trail is rated as easy to moderate.

The trail comes with a history. Smelters in Jerome were fueled by the timber from Woodchute Mountain. The logs were sent down the mountain via a log chute. Some of the mines in the mountain caved in and the mine owners built a new smelter in Clarkdale.

Dogs are allowed on the trail, but should be leashed. Horses are also allowed.