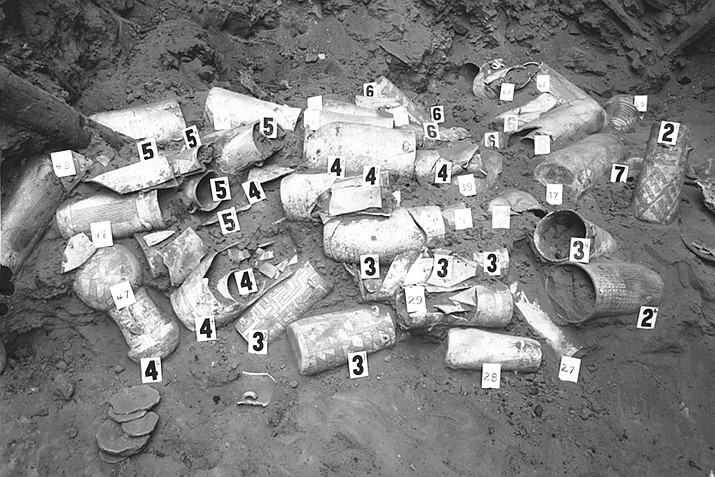 This 1996 photo provided by the American Museum of Natural History, shows an excavation site showing pottery vessels at Pueblo Bonito, Chaco Canyon, New Mexico. One pottery sherd at a time, archaeologist Patricia Crown has been working to unravel the mystery of chocolate and its importance to a civilization that once inhabited Chaco Canyon, believed to be a ceremonial and economic hub for indigenous people in what is now the American Southwest. Her discoveries over the last decade have shed more light on the widespread use of cacao across the region and the extent of early trade routes with Mesoamerica. But, she says, when it comes to Chaco, each discovery leads only to more questions that archaeologists and anthropologists need to answer. (American Museum of Natural History via AP)

A world heritage site, the massive stone structures left by Chaco’s early inhabitants have fueled scientific curiosity for more than a century, with each discovery made there spurring more questions about the people who called this stretch of high desert home.

One thing is for sure: Chocolate was part of life at the once-bustling ceremonial and economic hub.

By analyzing pottery sherds, archaeologist Patricia Crown solved that mystery in recent years when she and a chemist at the Hershey Company uncovered the first evidence of chocolate consumption at Chaco, far beyond the cacao-growing regions of Mesoamerica.

That work has since shed more light on early trade routes and on the widespread use of cacao in the American Southwest. More recently, researchers have found chocolate residue on sherds collected in Utah, Arizona and northern Mexico.

It makes sense, Crown said, since other exotic finds at Chaco — from copper bells and marine shells to scarlet macaws — suggest the inhabitants were trading with communities to the south either by making long treks or passing goods village to village.

“If you can bring a live parrot all the way up to Chaco Canyon, surely you can also bring some nibs of chocolate with you,” said Crown, a distinguished professor at the University of New Mexico.

As exciting as it was, Crown said the discovery of chocolate at Chaco marked just the beginning.

A member of the National Academy of Sciences, she wants to fill in the blanks and sort out the details of what chocolate meant to the Chacoans.

“So really the questions then become how were they preparing it, what were the additives, when did it first appear, who was drinking it — just all the things about the more detailed societal information,” she said.

Crown lectured Sept. 27 on her work and that of others. She has one book due out next year and another in the works that will look specifically at the cylinder jars that ultimately led her to the cacao discovery.

Tall and narrow, the straight-sided jars were first unearthed during an excavation in 1896. At the time, archaeologists could only theorize about what the jars were used for.

Many of the 200 jars known to exist were found in Room 28 of Pueblo Bonito. Archaeologists have said the pueblo was the center of Chaco.

Some jars came in sets. There were different sizes and different designs, some larger and more elaborate suggesting that the size of one’s mug mattered.

Crown had lots of questions and she thought re-excavating would provide some answers. After several years, she received permission in 2013 from the National Park Service — which manages the Chaco Culture National Historical Park — to take another look.

Her team discovered there were shelves in the room where the jars were kept and that around AD 1100 the room was purposely set on fire and destroyed.

Her work suggests the fire was ritualistic. She also has said the consumption of chocolate was likely ceremonial and involved a hierarchical aspect.

Crown said the Maya people were known for frothing up chocolate and drinking it, so it’s possible the idea traveled north to Chaco along the trade routes and gave rise to a new generation of cacao baristas.

“Imagine if there had been a border wall,” she said. “The free movement of ideas and goods across that border across thousands of years has been really important to our society.”

Crown consulted with a Maya specialist to connect the dots. She said Chacoans gave it their own twist, using their own materials and technology for crafting the cacao jars.