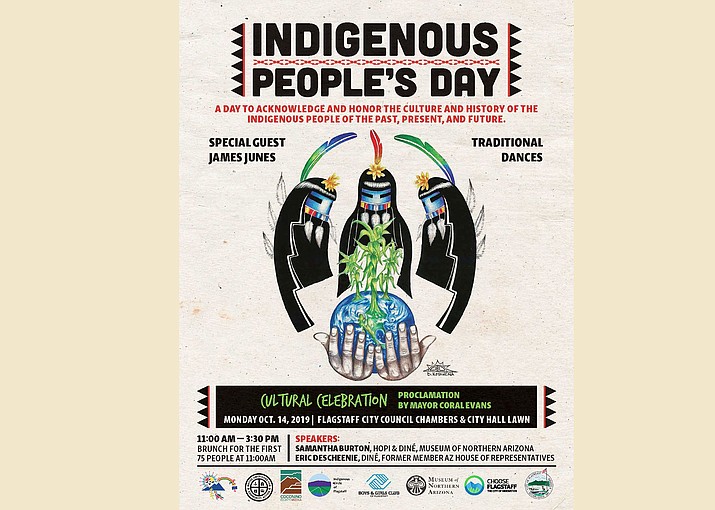 The Flagstaff city council passed a resolution in 2018 that recognized that Native people have inhabited the area of Flagstaff since time immemorial and that the city was built on lands inhabited by indigenous people of the region.

The proclamation stated the city is committed to “advocating for and supporting actions that lead to the advancement of social and environmental justice for indigenous communities per city council goals and objectives.”

The city also made commitment to help “enact policies to combat racism and to build justice and equity for indigenous people and all people who suffer from the effects of prejudice and discrimination.”

The city also recognized that the observance of Columbus Day was a celebration of genocide against indigenous people.

Catherine Esquivel, the indigenous coordinator with the city of Flagstaff and a Navajo tribal member, explained the proclamation was monumental and she is excited about the upcoming celebration.

She said it is going to be a day to acknowledge and honor the culture and history of the indigenous people of the past, present and future.

“The city of Flagstaff will be one of a small number of cities across the [U.S.] that will acknowledge and celebrate the culture and history of indigenous people,” she said.

She explained the planning committee has been busy planning for months now.

“The Indigenous People’s Day committee consists of indigenous professionals from various agencies in Flagstaff,” she added. “We have been carefully planning the event since June making sure to involve indigenous nations from northern Arizona and across this great land.”

She said the event is being advertised in several local newspapers and on social media. The event will also be live streamed on Facebook.

The event will start promptly at 10:30 a.m. with brunch with indigenous leaders at city hall and another brunch at 11 a.m. for the public that will be held in the foyer of city hall.

After the brunch, an opening prayer will be provided by Havasupai tribal member Dianna Uqualla in the council chamber and Esquivel will provide a welcoming address. The proclamation will be read by Mayor Coral Evans and some members of the Coconino County Board of Supervisors.

Guest speakers include Samantha Burton, Hopi/Navajo, bookstore and publication manager at Museum of Northern Arizona, and Eric Descheenie, Navajo, former member of the Arizona House of Representatives. The event will then move from the chamber to the city hall lawn where additional speeches will be made along with some traditional dances.

More information is available from Catherine Esquivel at the city of Flagstaff at (928) 213-2079 or catherine.esquivel@flagstaffaz.gov.