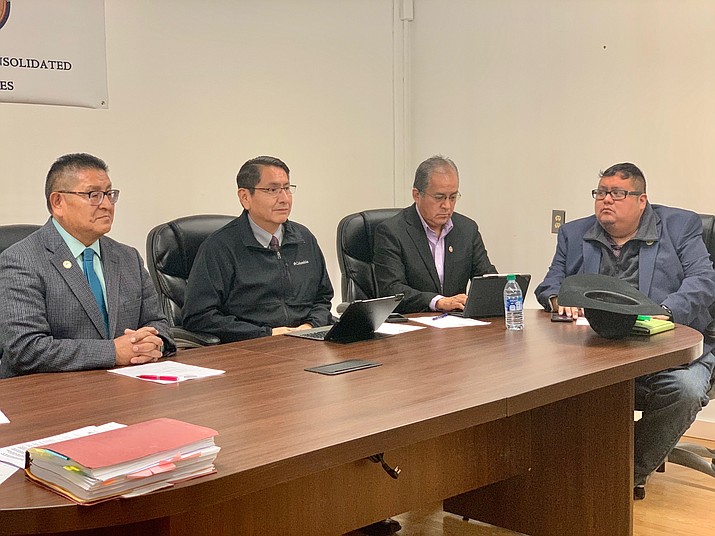 Hopi Route 60 is a 13-mile stretch of dirt road that connects the Navajo community of Low Mountain and the Hopi community of Polacca.

Nez said Hopi Route 60 serves as a significant corridor for residents, school buses, first responders, tourists and many others daily. He added that for the Navajo and Hopi communities to grow economically and for the benefit of residents, both sides would have to make compromises and work together for the long-term.

“I appreciate the Hopi Tribe’s willingness to work together. Under our combined leadership, we can present a stronger and united voice at the county, state, and federal levels to advocate for the completion of Hopi Route 60,” Nez said.

Hopi Tribal Vice Chairman Clark W. Tenakhongva said paving the route would also help the communities recover some of the revenue lost by the closure of Kayenta Mine and the Navajo Generating Station by creating a corridor for business development. He also spoke in support of continuing to partner with the Navajo Nation on other initiatives that benefit both tribes.

For many years, Hopi Route 60 has been in need of maintenance and pavement to serve the communities better. Several years ago, the Arizona State Legislature approved $1.5 million for the road. However, according to Navajo Nation Division of Transportation Executive Director Garret Silversmith, it would cost approximately $35 million to pave the route.

Silversmith recommended the Navajo Nation and Hopi Tribe begin by entering into an Inter-Governmental Agreement. He said the NDOT is willing to provide technical assistance to update existing design plans for the roadway and to seek additional funds. He also stated that the $1.5 million could contribute to making improvements such as the installation of two low water crossings, graveling and chip sealing.

Council Delegate Kee Allen Begay, Jr., who represents the Low Mountain community as a member of the Navajo Nation Council, said he’s ready to see the tribes take action by collaborating and sharing expertise and resources. Last week, Nez nominated Begay to serve as the co-chair of the Tribal Interior Budget Council’s Road Maintenance Subcommittee, which may also help in securing road funds.

Arizona State Rep. Arlando Teller (D-Dist. 7), a member of the Navajo Nation, was also in attendance and offered his recommendations, which included meeting with Arizona Gov. Doug Ducey to address the road issues. He also said that he would be introducing a bill in the upcoming State Legislative session to provide more resources for Hopi Route 60.

Navajo County Supervisors Jesse Thompson and Lee Jack, Sr. also attended the meeting to offer their support. Thompson said he looks forward to joining the Navajo Nation and Hopi Tribe in lobbying at the state level when the State Legislature begins its session in January.

The group is tentatively scheduled to meet again in December to continue discussions.