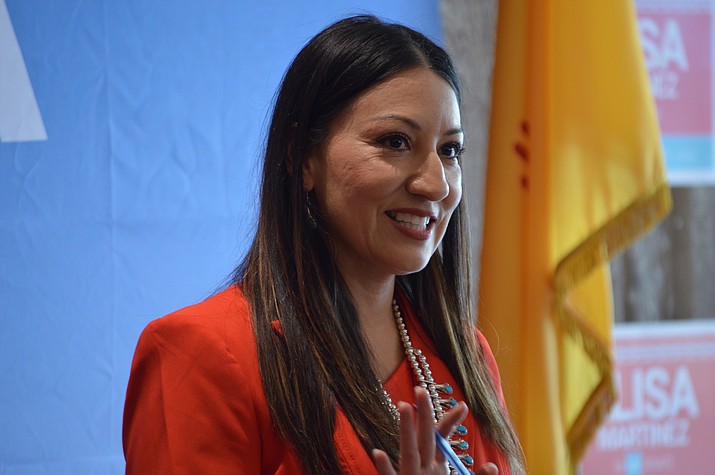 Republican Elisa Martinez speaks to supporters in Albuquerque, New Mexico, Nov. 20, after she announced she will seek the GOP nomination for an open U.S. Senate seat in New Mexico. The Latina Republican and member of the Navajo Nation will face contractor Mick Rich and college professor Gavin Clarkson in the Republican primary. (AP Photo/Russell Contreras)

ALBUQUERQUE, N.M. (AP) — Elisa Martinez, a Latina Republican and member of the Navajo Nation, announced Nov. 20 she is joining the race for an open U.S. Senate seat in New Mexico, potentially upending a contest Democrats had considered safe.

Speaking to supporters at an Albuquerque hotel, Martinez said she would seek the GOP nomination to take on likely Democratic nominee U.S. Rep. Ben Ray Luján and hoped to “make history” by becoming the first Native American woman in the U.S. Senate.

The anti-abortion activist said she decided to get into the race at the urging of supporters and after concluding that current elected leaders weren’t upholding “traditional New Mexican values.”

Martinez, the founder of the group New Mexico Alliance for Life, said she was committed to fighting “liberal socialist Democrats” who want to expand federal government funding into health care. She also falsely accused Democrats of supporting “abortions up to birth.”

Democrats have not supported any proposal that would allow abortions up to birth. In New Mexico, some Senate Democrats helped vote down a bill that would have protected abortion rights in the event the landmark Roe v. Wade U.S. Supreme Court decision was overturned.

The Democratic Party of New Mexico declined to comment.

Martinez will face contractor Mick Rich and college professor Gavin Clarkson in the Republican primary. Clarkson is a member of the Choctaw Nation.

Martinez said her father has deep Hispanic roots in the state going back 15 generations, and her mother’s family is Zuni Pueblo and Navajo.

“I know I don’t fit the mold of a Republican,” Martinez said, without mentioning President Donald Trump in her speech. “But I am a working-class Republican.”

After her announcement, Martinez told reporters she was not offended by Trump’s use of the racial slur “Pocahontas” to describe Warren.

“Congressman Luján has a strong record of serving New Mexican families and is confident that voters share his values and his vision for our communities,” Elkins said.

Luján has no Democratic primary opponent.

Martinez is one of four Native American women running for federal office in New Mexico next year.