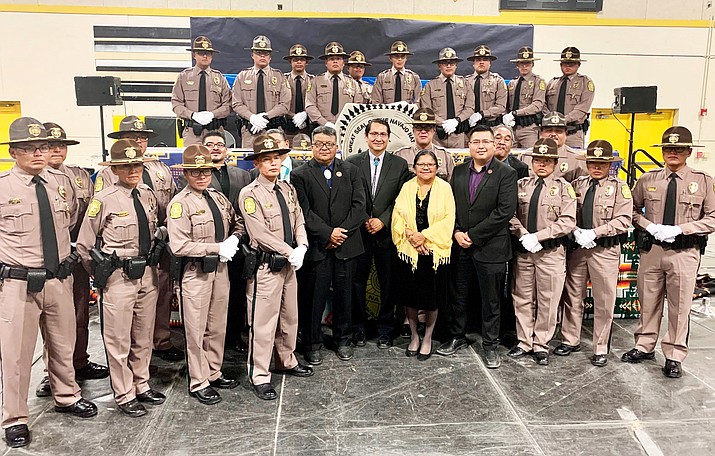 Each of the 19 officers completed the 24-week police academy training, which was overseen by the Navajo Police Department.

The Navajo Police Academy, located in Chinle, has prepared three classes of recruits within two-years for careers in law enforcement under an environment that upholds respect, self-discipline, accountability, academic achievement, integrity and professionalism. The graduates of Class 54 completed challenging training in academics, physical and mental conditioning, communications, firearms, and others. The academy also integrates Diné Fundamental Law, as well as state and federal laws, into the training curriculum.

In support of the recruits, Nez joined the recruits Oct. 30 for the group’s final police academy run through the community of Chinle.

Nez congratulated the new police officers and their families and thanked them for their commitment to serve the Navajo Nation during the graduation ceremony.

“We congratulate and commend the Navajo Nation Division of Public Safety and the Navajo Police Department for supporting and preparing the new officers. Serving in the line of duty will be a physical, emotional and mental challenge for the new officers and their loved ones. However, through prayer and the support of their families and communities, I am confident they will serve and protect our communities well,” Nez said. “Our young officers have a direct influence to heal our people through respect and trust of authority within our communities through compassion, patience, and leadership.”

The 19 police officer recruits took the oath of honor administered by Chinle District Court Judge Rudy Bedonie, while their loved ones participated in the pinning of the Navajo Police Department badge. Recruits include: