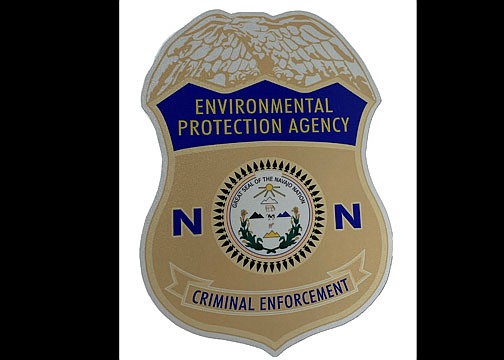 “This is another important step forward for the Environmental Protection Agency Criminal Enforcement Division to enforce the Navajo Nation’s environmental laws, including our air, water, and land resources. We have many laws in place to protect our environment, but our Nation has not enforced them as much as we should. Therefore, we encourage our Navajo citizens to be aware of the agency’s officers and vehicles within our communities,” Nez said.

The NNEPA Criminal Enforcement Division officers are legitimate law enforcement officers, who are post certified and legally authorized Peace Officers. As officers, they are allowed to carry weapons, effectuate arrests, and respond to violations and disputes. Additionally, the officers enforce the Navajo Nation laws by investigating cases, collecting evidence, conducting analysis, and providing legal guidance to assist with prosecutions.

“Within the agency, the skill and authority of the agency’s officers are needed to address environmental violations and disputes, such as illegal dumping and open burning. The agency highly depends on the officers to respond, investigate, and report incidents, and the public needs to be aware of their presence in the communities,” Whaley said.

“We commend Mr. Whaley and his team for moving forward in this effort to reduce the amount of violations in our communities. In every chapter, we hear from our people about illegal dumping. This will help to prevent that and make people think twice about violating our laws,” Lizer said.

In August, Whaley also announced that the NNEPA would also begin to seek prosecution of those who illegally dump trash and waste in Navajo communities. In addition, the Nez-Lizer Administration is working diligently to develop a landfill for the Navajo Nation to help address the issue of illegal dumping.

The NNEPA Criminal Enforcement Division will be developing rotations of patrol duties to monitor violations across the Navajo Nation.

The Nez-Lizer Administration also encourages communities to be proactive in addressing illegal trashing dumping and to hold others accountable if this is occurring in your neighborhood. The public is encouraged to report illegal trash dumping by calling the Navajo Nation Environmental Protection Agency at (928) 871-7692.