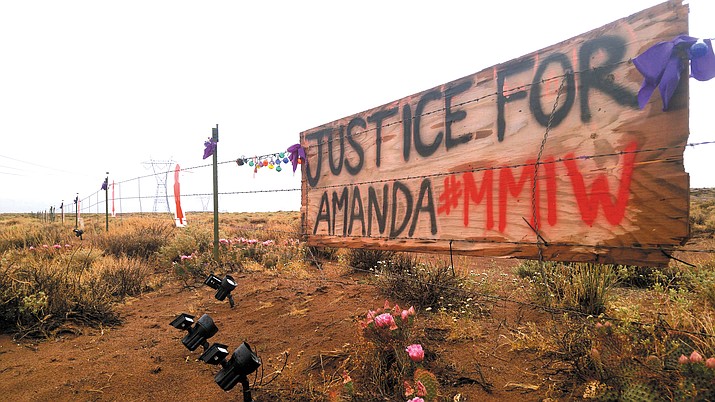 The Missing and Murdered Diné Relatives working group is bringing hope to families across the Navajo Nation like the family of Amanda Webster, who was murdered in Kentucky Dec. 1, 2018. Above: a memorial for Amanda Webster on Highway 89 outside of Cameron, Arizona, where she was from. (Kevin Moriarty/NHO)

FLAGSTAFF, Ariz. — Isabelle Webster, from Cameron, Arizona, voice was full of pain as she spoke about her granddaughter, Amanda Webster, who had been murdered Dec. 1, 2018 in Kentucky, to a Missing and Murdered Diné Relatives working group meeting in Tuba City Oct. 29.

The testimony of families, if they choose, happens at all of MMDR work group meetings as a reminder that the issues the group is tackling are real ones, with real impacts on families and communities across the Navajo Nation.

Jolene Holgate, coordinator for the MMDR, said the spirit of the group’s work comes from the families who have lost relatives, who have had a relative murdered and the issues they have encountered in finding justice and support for their families. 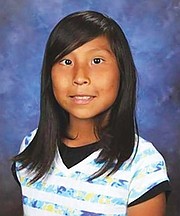 Like the family of Ashlynne Mike from Shiprock, Arizona. Ashlynne was raped and murdered May 2, 2016. She was 11 years old.

That case spurred Navajo Nation Council Delegate Amber Crotty’s sexual violence work and pointed out many failures in the systems on the Navajo Nation, like the Amber Alert that went out after she had been found — something that has since been addressed because of her case.

Crotty was instrumental in establishing the MMDR working group in March, providing some much needed hope for the families of missing and murdered indigenous women, girls, men and boys on the Navajo Nation.

“She has been such a powerful voice for us,” Holgate said. “That’s an important aspect, to really have that buy-in from a leader who has that platform.”

The MMDR working group consists of 30 unpaid volunteers who have knowledge in different areas of the ongoing crisis: epidemiology, public health, injury prevention, data research, policy development and community members and students who are interested in helping with the cause.

One of MMDR’s major collaborators is with the Navajo Nation Missing Persons Updates, which is on Facebook. The group connects MMDR with families who have spurred the work they are doing.

The group has been holding and will continue to hold community forums where they can find out what exact issues are impacting communities. The next forum will be held in Gallup at the RMCH Solarium Nov. 21-22.

“We wanted to see what areas intersected with missing and murdered and that, of course, includes trafficking, sexual and domestic violence and those sorts of issues,” Holgate said.

But that is only one aspect of what the working group has set out to do.

They also are looking at ways to provide pathways to support law enforcement and leaders.

“Because anywhere on the reservation…there’s a lack of resources, lack of funding, you name it,” Holgate said. “We want to look at ways where we can provide some of those policy recommendations to leaders [and] recommend programs that might be able to help them.”

Part of that is addressing what has always been lacking in tracking missing and murdered indigenous people: data. 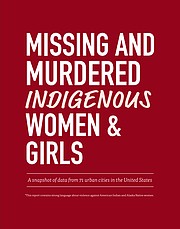 A report released last year on cases of Missing and Murdered Indigenous Women and Girls in urban areas released by the Urban Indian Health Institute, a division of the Seattle Indian Health Board, said the cases, and lack thereof, are a nationwide data crisis.

The report said that in 2016, the National Crime Information Center reported that there were 5,712 reports of missing Native women and girls, although, NamUS, the U.S. Department of Justice’s federal missing persons database logged only 116.

Annita Luchesi, who is with the Sovereign Bodies Institute, created one of the first MMIW databases in the nation. She came to the MMDR working group and explained the challenges that the Navajo Nation would have because of its large population and because the Nation covers three different land areas.

Luchesi said there needed to be a way the Nation could have autonomy over the information, which is where the idea of the Data Institute came from.

The Navajo Epidemiology Center and Diné College will be the co-lead agencies working on the institute and both institutions are part of the MMDR working group.

The Data Institute will bring in all the cases on the Navajo Nation that are related to the issue as Holgate mentioned — sex trafficking, domestic and sexual violence, among others — into one place where that data will be able to be given to leadership, stakeholders and law enforcement.

There has already been important discoveries when looking at the data.

Holgate said on Navajo, in comparison to other nationwide MMIW cases, the majority of missing persons cases are men and boys. But murder and violence are happening at a higher rate for women. So, the working group made sure to be inclusive and holistic in its approach to looking at individual cases. 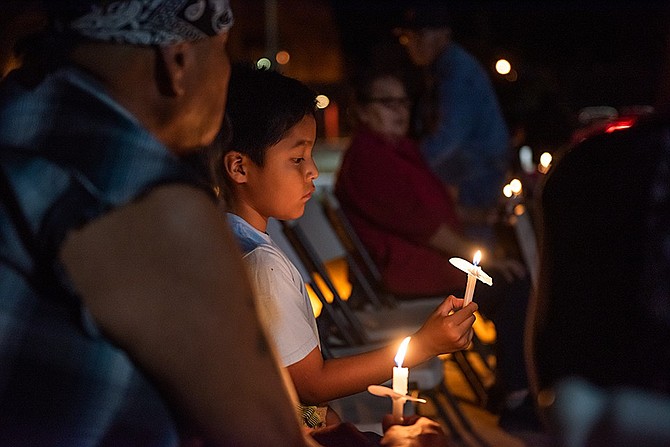 Relatives and friends of murder victims took part in a candlelight vigil at the Navajo Nation Council Chamber Sept. 25 in Window Rock, Arizona. (Photo/Office of the Speaker)

Trafficking happens at home, too

Holgate points out that most people think trafficking of people for sex only applies to international cases. But that isn’t true. She said it can happen everywhere and does — and the Navajo Nation is no exception.

She explains the case of a young lady who was being dropped off at a male relative’s house in exchange for cash and food stamps.

“The mother would drop her off and then pick her up a couple hours later,” Holgate said. “So, yeah. That’s definitely trafficking.”

A law change shifted those cases from child sex abuse cases to trafficking cases where they can be prosecuted the perpetrators at the federal level.

The MMDR working groups wants to engage in action beyond discussion and awareness events.

“We support those and think they are wonderful, but we want to make sure we have that action component when we start addressing this issue,” Holgate said.

The forum will be held in Gallup Nov. 21-22. Day one will consist of presentations and remarks from leadership. Day two will consist of engaging with community members and stakeholders. The group will pose questions to those present and record the feedback and incorporate those answers into their work.

Some of the paths the group follows are ones brought to them by the community.

“This is what they’re asking for,” Holgate said. “All they wanted was a platform for their voices. And we want to make sure we give that to them, especially the families of the missing and murdered.”

And part of that action is also a community toolkit, which will empower Navajo communities.

The task force meetings are important largely because they encourage accountability for those on the task force.

“They’re in a position where they can make meaningful change and we want to foster those relationships with them,” Holgate said. “And we want to ensure accountability with one another.”

Why are these cases not an epidemic but an ongoing crisis?

Holgate said it is not unusual to encounter skepticism from people who think the Missing and Murdered Indigenous Women (MMIW) or MMDR are just buzz words or a social media movement that just started.

“In reality, MMIW started in the 1970 in Canada…it’s been ongoing as far as addressing the effort at a grassroots level,” Holgate said.

An epidemic is defined as a widespread occurrence of an infection disease (or occurrence) in a community at a particular time, which generally has an endpoint.

Holgate said what is happening with missing and murdered people in indigenous communities goes beyond that.

“This has been an ongoing crisis for indigenous people since 1492,” Holgate said. “A lot of our young indigenous women back then were trafficked. They were kidnapped. They were murdered. A lot of that violence was perpetrated against indigenous communities.”

What is different now is that indigenous communities are now able to address those issues.

“We are able to really speak up and use our voices and say, ‘No, we’re not taking this [any] more. We’re not. We’re not going to allow this cycle of trauma, the cycle of violence to be perpetrated against us anymore. And this is an ongoing crisis and that’s how we want to recognize it.”

More information is available at on Facebook at MMDRDataInstitute. 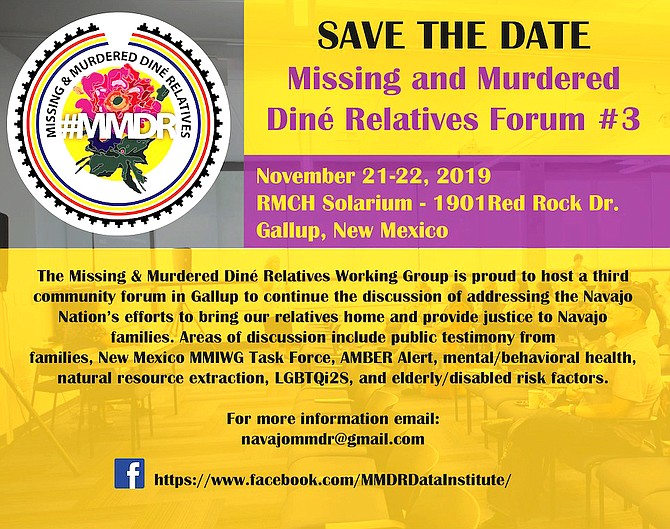