Computers available to veterans, thanks to Coconino County Board of Supervisors 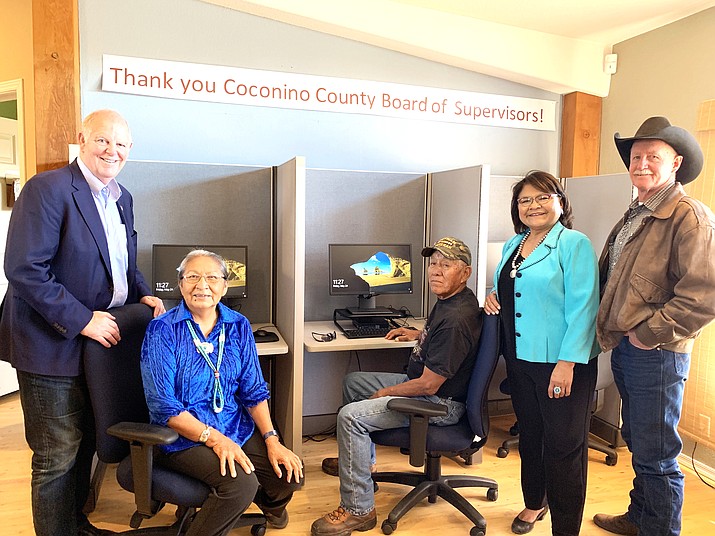 TUBA CITY, Ariz. — After years of advocating, the Coconino County Board of Supervisors were able to open the doors to the Veterans’ Computer Center thanks to a partnership with the Navajo Nation Veterans Administration.

In May, the center was finally open to all veterans as a place to access the internet for free to check eligibility of their benefits, to job search, apply for school or employment, to create a resume or just to check their email.

Lena Fowler, Coconino County Supervisor for District 5, explained over the course of her 10 years as county supervisor, she noticed many veterans did not have access to the internet especially during a time when a majority of communications is done via email and through electronic submission.

“They are told that they can file online and they [have] been telling me for several years that they don’t have access to that,” she said. “And so they go to the library and [internet] is limited and they can’t get it done.”

Fowler said the veterans desperately needed such a service.

“We always talk about helping the veterans and there’s a lot of program that are out there for them but a lot of it is on the internet,” she explained.

So she advocated for this project and persuaded her fellow county board of supervisors to support this worthy cause and they did.

“We all agreed that this needed to happen,” she said.

With the support of the board of supervisors, she set out to find a way to make it all happen. They needed a physical location designated for the set up and so it only made sense to have them installed at the local veteran’s office in Tuba City. They began discussions with them and so the process began.

She said the process did not happen overnight but it took years of constant follow-up through two tribal administrations just to install computers in the tribally-run veterans’ administration office but it got done.

The county purchased the five brand-new computers complete with internet accessibility, a printer, a scanner, equipment and furniture as a donation, and they had county staff install them.

“The computers are there ready to use. Veterans can communicate with the veteran’s administration and do their online filing,” she said.

She also explained many of the veterans did not have email addresses and so staff have been helping them set up email accounts. Various veterans’ organizations are also using the computers to type out their meeting minutes and emailing them to Window Rock opposed to driving nearly six hours roundtrip to deliver them.

“There is a lot that they can do on these computers,” she said. “It is really important they start using [them].”

She said that most veterans in the area do not have computers in their home and even if they did, they likely do not have internet access or even power access.

The computers are setup for privacy but they are still able to seek help from other users and staff members. Staff members are there to help the veterans with filing their online applications, do job searches, check on benefits, submit online documents, scan documents and essentially whatever they may need help with while using the computers.

“They don’t have to drive all the way to Prescott or all the way to Flagstaff or somewhere to submit something —they can actually do it online,” said Fowler.

The computers are not just for filing benefits and it is just not only for Navajo veterans but all veterans.

“Even if there is a veteran that is just driving through and they need a place to go to communicate back home to say, ‘This is where I’m at and I’m OK,’ or something,” she said. “They can come here — it is for all veterans.”

She said all veterans need to know about this service and that is it is here for them to use.

“Maybe even just to create an email or communicate with your children living elsewhere,” she added.

Fowler is happy this project was established. She said some veterans never even touched a computer and now they are learning how to use them for simple functions.

“They are having fun with it,” she said. “There is always someone there to help them.”