‘All Eyes on Me: A Collection of Diné Poetry’ available at Salina Bookshelf, Inc. 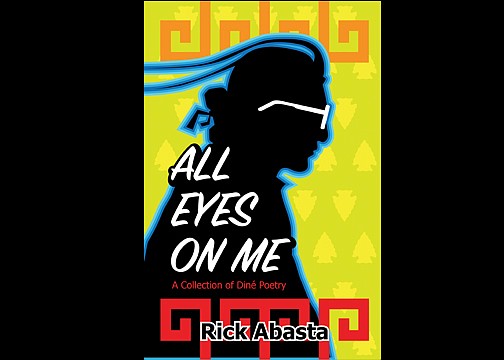 FLAGSTAFF, Ariz. — Rick Abasta works through new love, breakups and heartbreak, family and disappointment with political corruption in his new book of poetry, ‘All Eyes on Me: A Collection of Diné Poetry,’ released from Salina Bookshelf in August.

“I wrote about subject matter that had a profound impact on my life,” Abasta said. “The message was basically to provide an unfiltered and contemporary view of Navajo life.

The book is comprised of 30 poems written over 25 years about various subjects that Abasta encountered — as they occurred, he wrote about them.

“I wrote these poems in the heat of the moment,” he said.

In fact, the book is the culmination of 25 years of Abasta’s life. He began writing poems shortly after returning from the Army in 1994 and admits some of the original poems were more explicit. Editors at Salina Bookshelf worked with Abasta on some revisions, which included changing the title of the book, ‘Ma’ii Hashkee Baa Hane’ (Angry Coyote Poems) 53 Poems of Navajo Existence.’

Tyler Mitchell, executive editor at Saline Bookshelf, said (in a forward to the collection) that he imagined Abasta writing the poems to survive the thoughts going through his head inside offices, where thoughts often linger too long.

“Living in the modern-day reservation we’re faced with anxiety toward love, politics, family, and we’re left alone to question our place in all of it,” Mitchell said. “Each poem feels like a lesson learning how to survive on the Rez. From the political viewpoints about government and tribal leadership to the abrupt love poems, Rick Abasta’s poetry reminds us that our painful moments are fulfilling, and every thought is necessary for poetry to exist.”

Abasta is not new to writing. His day job, in various capacities, involves writing.

“Writing poems to exorcise my personal demons was just an extension of that,” Abasta said.

Still, with all the writing Abasta has done, this is his first published work.

“I am very humbled and grateful to the publisher and editors at Salina Bookshelf for this amazing opportunity,” he said.

Abasta has published a number of zines since high school and college, much of it steeped in poetry, art, photography and personal expression.

“Having a book published is an affirmation of my dream to become a writer since the late 1980s when I was introduced to Stephen King’s body of work by Bruce Fredericks, my eighth grade teacher at Ch’oosgai Boarding School,” Abasta said. “I have come a long way since then.”

And if he could pass on advice to young writers who are thinking about writing a book is to write about anything and everything that they are moved by and that makes them think.

“Find your voice and share it with the world,” Abasta said. “The important part of the process is just putting pen to paper and getting something down. The revision process will take care of everything else.”

Abasta credits his grandfather with his philosophy and approach to writing, whether that is poetry or copy writing for his work.

My late grandfather, Joe Keedo, used to say ‘Doo nik’ehdii naasháa da,” which basically translates to ‘I don’t live for you,’” Abasta said. “Sometimes people get bogged down in credentials technicalities and the supposed acceptable process for writing. At the end of the day, who cares? Write or die. Doo nik’ehdii naasháa da.”