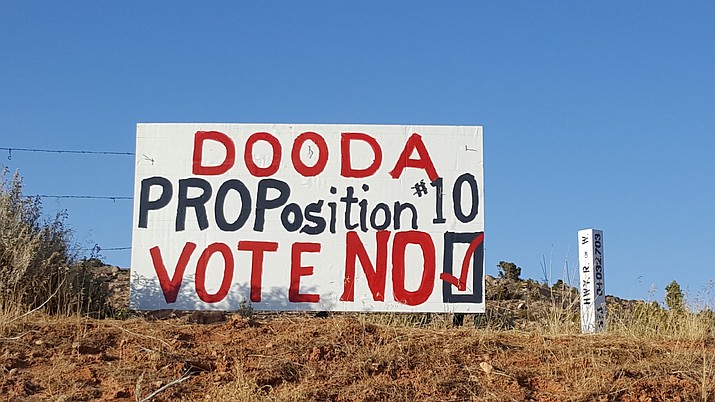 Prop 10, which was a ballot measure that proposed to create study committee to consider changes to the structure of government in San Juan County seems to have been defeated at the ballot box Nov. 6, according to unoffical results. Navajo Nation President Jonathan Nez and Vice President Myron Lizer welcomed the result. (Photo courtesy/Office of the President and Vice President)

Prop. 10 was a ballot measure that proposed to create a study committee to consider and possibly recommend changes to the structure of the county government. Results released by San Juan County Nov. 8 showed 1,967 “yes” votes and 2,120 “no” votes.

“With Tuesday’s vote, the people have spoken loud and clear — it’s time to put this issue to rest. The defeat of this measure should encourage all county officials to move forward with more meaningful initiatives like the improvement of school bus routes, stimulating the economy, creating jobs, and many others issues that will benefit all county residents,” Nez said.

Last year, members of the Navajo Nation were elected to fill two of three San Juan County Commission seats for the first time in San Juan County’s history. If Proposition 10 was passed, it would have severely jeopardized last year’s vote of the people.

Following last year’s election, certain officials challenged the eligibility of one Navajo candidate who was fairly elected to serve as a county commissioner. Efforts to reform the commission by increasing its membership from three to possibly five began after repeated attempts to disqualify the Navajo candidate — the first step in that process was the introduction of Proposition 10.

“We thank everyone who got the word out to vote ‘no’ on Prop 10. Native American people have been fighting for voting rights for a long period of time. Today, we embrace this victory and we hope that it sends a message across the country that we will stand up for our rights as the First Americans,” Lizer said.

In a press conference on Oct. 29, Nez spoke about the need for the county to heal and unite following the Nov. 5 special election.

“We have hope for all people of San Juan County, Utah. Now is the opportunity to put any differences behind and move forward on a path of unity and prosperity,” Nez said.