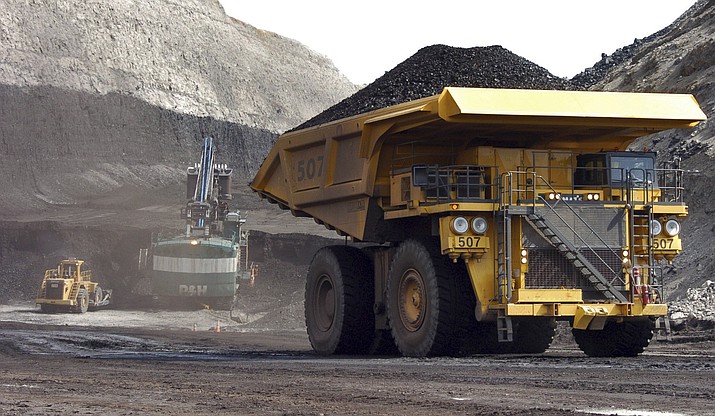 WINDOW ROCK, Ariz. — The Navajo Nation pulled its financial guarantees for the tribe’s coal enterprise, the Navajo Transitional Energy Company, saying the company had purchased three coal mines in Wyoming and Montana without informing the tribe.

The tribe also said the company is not providing adequate information about the business or its finances.

A news release Tuesday from Navajo Nation President Jonathan Nez and Vice President Myron Lizer said the tribe was exercising “the termination provisions of the general indemnity agreements related to the Navajo Mine.”

These agreements were cited in the company’s acquisition of three coal mines in Wyoming and Montana.

“The Navajo Nation’s financial portfolio as well as our resources would be placed in a state of uncertainty if we allowed NTEC to proceed with finalizing the bonds needed to operate these three mines using the Nation’s consent given in these indemnity agreements,” President Nez said in the news release. “Many experts question the viability of expanding our interests in a coal market that appears to be dwindling. We will not support initiatives that attempt to circumvent or undermine the laws and policies of our Nation.”

Navajo Transitional Energy Company has been investing in coal at a time when the industry is collapsing. Murray Energy was the latest coal company to file for bankruptcy, the eighth coal company to do so this year.

One of those bankrupt companies was Cloud Peak Energy — and that included assets acquired by Navajo Transitional Energy making it the third largest coal company in the country.

Navajo Transitional Energy bid $15.7 million in cash, borrowed another $40 million, plus royalties, and agreed to pick up the cost of tax liabilities and federal and state coal royalty payments, all reclamation obligations, and up to $20 million accounts payables.

And when the state of Montana insisted that the coal mine follow regulatory structure, the company pushed back, citing its tribal powers. “We have done everything in our power to ensure (Montana) that we will operate under their laws, but we simply cannot consent to a full waiver of the rights preserved in our treaties – to do so would put the foundations of Indian Country at great risk,” said the company’s chairman, Tim McLaughlin.

But the Navajo Nation did not have “control” of that company. On its web site Navajo Transitional Energy said it is “100 percent owned, but not controlled, by the Navajo Nation.” The company also points out in news releases that one of its tools is the tribe’s limited waiver of sovereign immunity.

In July the company won an appeals case based on the tribe’s sovereignty.

“The Navajo Nation’s interest is tied to its very ability to govern itself, sustain itself financially, and make decisions about its own natural resources,” Circuit Judge Michelle Friedland wrote. The appellate court confirmed both NTEC’s right to have intervened in the lawsuit as well as its ability to assert sovereign immunity against the underlying claims asserted by the various environmental groups. Based on these findings, the court upheld the dismissal of all claims,” the company news release said.

On Nov. 12, the tribe said it wanted more information from the company.

“NTEC has not provided the Nation’s leaders with detailed information regarding its financial performance and outlook, so we should not be placed in a position to provide financial backing for NTEC without that critical information,” the news release said. “The Office of the President and Vice President did not learn of these acquisitions until NTEC issued a press release on Aug. 19 — this action alone is disrespectful of our Nation’s leaders and the interests of the Navajo people.”

Vice President Lizer said in the news release: “The Nez-Lizer Administration strongly supports Navajo businesses and enterprises, but business has to be conducted the right way with transparency and integrity. NTEC should focus more resources into transitioning their energy portfolio to acquire and develop renewable energy for the Navajo Nation.”

The business case for the Navajo Transitional Energy is disputed.

One study prepared for the company said it was “purchasing these mines at a very low cost. The purchased assets include almost 1 billion tons of leased coal reserves, almost 100,000 acres of owned surface lands, and a huge fleet of mining equipment (draglines, shovels, trucks and dozers).”

“Cloud Peak is a Prudent Investment for NTEC and the Navajo Nation,” the report said.

The study said it expected domestic coal demand to continue to decrease, but that demand would still exceed 250 million tons a year.

But an op-ed, and a study by the environmental think tank, Institute for Energy Economics and Financial Analysis, aid the purchase was coming at a terrible time. “The central problem is the mindset driving the proposal,” wrote researcher Karl Cates. “The management team at NTEC — made up of three non-Navajo executives who come from previous careers in U.S. coal mining — appears trapped in an outdated fixation on coal.”

Clark Williams-Derry, writing for Sightline.Org in Seattle, said “anyone who buys Cloud Peak’s mines will take on significant financial risks. We here at Sightline have documented Cloud Peak’s financial struggles for years, including the tremendous losses on Asian exports, the operational challenges at Cloud Peak’s mines, plummeting demand for Cloud Peak coal, narrowing profit margins, and massive, value-destroying write-downs of the company’s assets. What’s more, NTEC’s purchase comes in the midst of sharply declining coal sales across the country, continued coal plant closures, and a tsunami of coal industry bankruptcies.”

“It has become awfully difficult to make money mining coal,” Williams-Derry wrote. And if the venture fails it will be the Navajo Nation with a “dismal investment returns.”

Indeed since the deal closed the coal industry has continued to deteriorate.