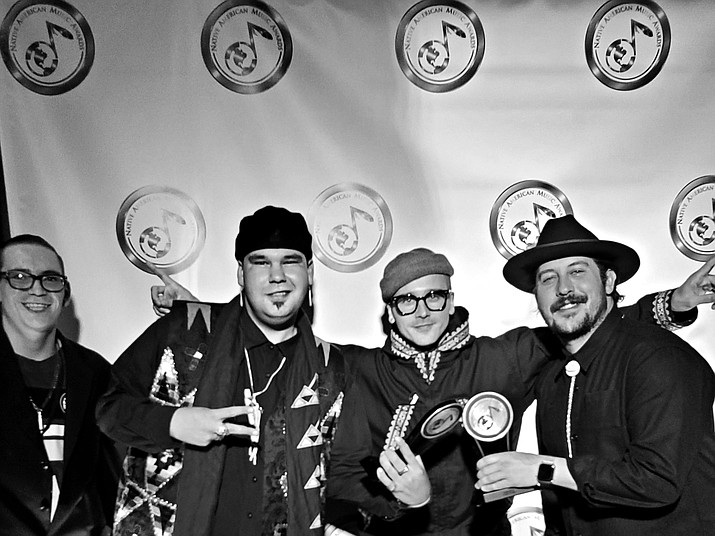 The bands award was for their album “The Cody Blackbird Band and Connor Chee Live at Whitehorse Black Mountain” and was announced shortly after they took the stage for a riveting and powerful performance in front of a sold out crowd at Seneca Niagara Casino and events center in Niagara Falls, New York Nov. 1.

The show was hosted by Oscar recipient Wes Studi of the Cherokee Nation (Last of the Mohicans, Avatar, Dances With Wolves) and WWE Wrestling Superstar Mickie James of the Powahatin Tribe

The Cody Blackbird Band is an alternative rock fusion group originally from Anchorage, Alaska but now based in Phoenix, Arizona. The band is produced by Kenny Lee Lewis of the Rock and Roll hall of Fame inducted Steve Miller Band. The band incorporates Native American Flute and other traditional elements into their music to creat truly unique one of a kind sound.

Additionally, Blackbird and Seneca Nation’s Brett Maybee, on behalf of NAMA, presented platinum selling Grammy winners Portugal The man (“feel it still”) with the NAMA Legend award for their work with indigenous peoples across the globe.

This is Blackbird’s fifth NAMMY and the second Group of the Year win for the band.

In celebration of November as American Indian Heritage Month, The Cody Blackbird Band will be performing with fellow Award Winners SIhasin and other Indigenous musicians Nov. 15 in Flagstaff at Firecreek Coffee Co. The show takes place at 8 p.m., doors open at 7:30 p.m. Tickets are $10, children 13 and under are free.