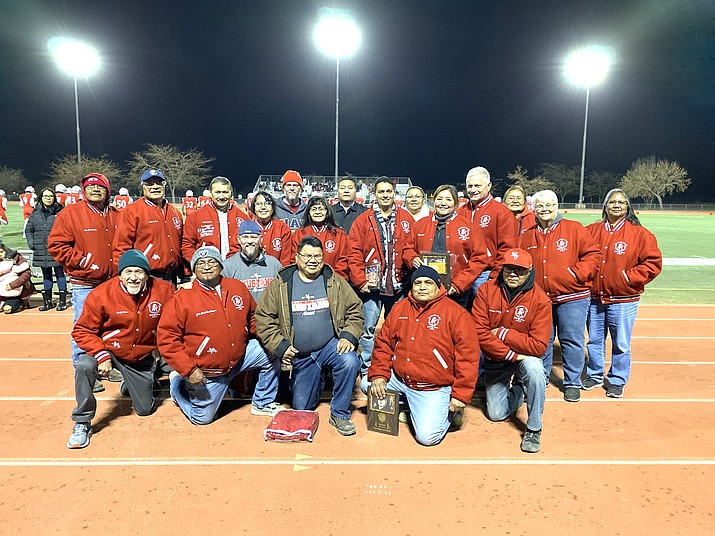 KAYENTA, Ariz. — Some of the best of the best student-athletes from years past were inducted into the 2019 Hall of Fame at Monument Valley High School Nov. 1 during the school’s last home game of the season.

Inductees must be graduates of Monument Valley High School, have demonstrated an exemplary high school athletic career, been good student-athletes and have gone on to do great things after high school. One caveat: inductees cannot have a criminal background.

Clark-Joe, 41, graduated in 1996 and helped lead Monument Valley to volleyball state championships in 1993 and 1995. She received several conference and state recognitions but most notably, she was named the 3A North Co-Player of the year with April Clairmont of Ganado in 1995 and she was also named the Navajo Times Player of the Year. She also played basketball and was a member of the 1996 state runner-up team that played Winslow High School in the state championship game.

After high school, she went onto the University of Arizona on an academic scholarship with no plans to play volleyball, but she ended up receiving an athletic scholarship. She played volleyball for four years as a defensive specialist under longtime coach Dave Rubio.

Clark-Joe has a bachelor’s degree in ecology and evolutionary biology from the University of Arizona and a master’s in public health from New Mexico State University. She currently works as a district sanitarian in the Office of Environmental Health with the Indian Health Services at Gallup Indian Medical Center in Gallup, New Mexico.

Clark-Joe’s clans are Bit’ahnii (Folded Arms People), born for Ta’neeszahnii (Tangle People clan), her maternal grandfather’s clan is Tł’ízí lání (Many Goats) and her paternal grandfather‘s clan is Tábąąhá (Waters Edge clan). Her parents are Juanita Sullivan and the late Elvin Clark. She is from Kayenta but also claims El Capitan, located seven miles north of Kayenta, as her home as well.

She said she was humbled to receive the honor of being inducted into the Hall of Fame.

“You take it for granted — the things that you have accomplished — until you are commemorated for it,” she said.

She wants to encourage people to keep believing in themselves and to believe in the abilities they have.

“Have confidence to go out and accomplish your goals and your dreams,” she said. “It starts with believing in yourself.”

Also inducted was Dallas Gilmore, 41, who also graduated in 1996. He was an outstanding football player, garnering the 3A North Conference Offensive Player of the Year and the Navajo Times Player of the Year honors. He played football, baseball and track during his high school athletic career.

Gilmore is currently a major in the U.S. Army and has been serving since 2005; he served three years in the National Guard and was commissioned as an officer in the Army in 2008. He is also an economics instructor at the U.S. Military Academy West Point in New York.

He holds a bachelor’s degree in mathematics from Brigham Young University and has a master’s degree in public administration from North Carolina State University.

He was also humbled to be recognized as a hall of fame inductee.

“Immediately, I thought about my family, especially my wife, Bonnie Gilmore, who I’ve been married to for almost 20 years and the sacrifices that she’s made to help support me in my career and six kids,” he said. “I would not be able to do things that I do without her support and [the] support from my family, my parents and my in-laws. That is what I thought of the most.”

Gilmore said he wishes he could be near his home community more but work has kept him far away doing what he loves. Regardless of the distance, he said he holds the community and the things he learned in his heart and tries to be a good example of his community.

“I try to be an ambassador, not just for myself and my family but for the Navajo people as a whole,” he said. “The example that I’ve been able to show my colleagues in the Army, my soldiers, my peers, my leaders, gives them a good impression of what the Navajo people can do and what we stand for… the strength that we have to serve our country and to lead soldiers in battle.”

Another inductee was Harlan Herder. He was the 1991 Arizona 3A State Wrestling Champion in the 112 pound class. Attempts to contact Herder for an interview were unsuccessful by press time.

Holiday said all the Hall of Famers have excellent careers and have all made their marks.

“I always tell people, ‘Our school graduates great people!’ he said. “We may not have professional athletes but man, we have wonderful honorees that have done great things in their careers and it is really amazing.”

Holiday explained the Hall of Fame inductions is one highlight of his job. He enjoys getting to know the inductees, visiting with them, interviewing them and hearing about their life journeys.

He often tells students and community members they do not have to look too far to find their local heroes and people to look up to.