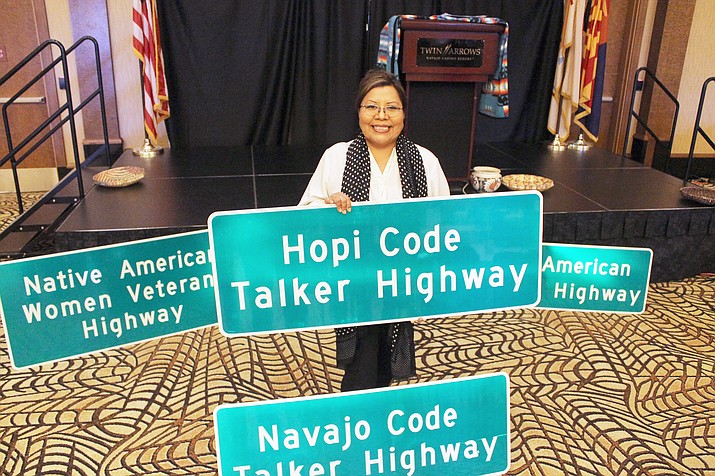 MOENKOPI, Ariz. — There is more than one way to skin a cat according to Arizona State Sen. Jamescita Peshlakai (D-Cameron) who used wit, charm and good old research to outmaneuver a Republican-controlled House of Representatives and Republican speaker just to bring honor to Native American veterans.

Peshlakai got four sections of Arizona highways renamed to honor Native American veterans but it was no easy feat. She had to outmaneuver a partisan legislature and speaker bypassing them entirely and using an administrative loophole with the help of Katie Hobbs, the Arizona Secretary of State. 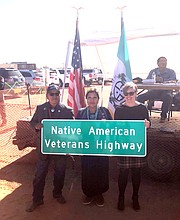 Peshlakai explained that her journey to rename the highways began in 2013 when she was approached by then-Hopi Tribal Chairman Herman Honanie. He had an idea to rename State Route 264 the Hopi Code Talkers Highway in honor of 10 Hopi Code Talkers that served during World War II.

She agreed with Honanie and drafted legislation. When Honanie’s term ended, she continued working with the new Hopi administration that “took up the torch that Chairman Honanie had lit.”

Peshlakai said she believes partisan politics was at play in all the years it failed or died but she said “that is politics at the legislature.” The last time it failed this past session, she became even more determined and it prompted a new game plan.

With support of tribal leaders, Peshlakai set out to find a way to make the renaming possible. Through intense research, she found an administrative loophole. She discovered the Arizona Secretary of State had jurisdiction over the Arizona State Board on Geographic and Historic Names — the key to the renaming.

Peshlakai found a law that basically stated that the state has no jurisdiction in naming highways that run through tribal lands and tribes could name them what they wanted. This avenue did not require them to go through the state legislature or to beg the governor for approval.

They immediately got to work in submitting all their documents which included letters of support from tribal leaders and committee testimonies collected over the years. They submitted their application and it was eventually approved by the board, and the secretary of state signed it and it was a done deal.

“I worked on this [very] hard [to] find every loophole,” she said. “My staff worked hard.”

Peshlakai said partisan politics continued even to the day of the official unveiling Oct. 12. She explained the highway renaming was approved in late July, she approved the sign designs in August and the Arizona Department of Transportation (ADOT) erected all the signs in September without any notice.

“They gave us no heads up,” she said despite instructing ADOT to notify her of the sign installation so she could properly inform the tribes and veterans.

Peshlakai wanted to properly inform the tribes and the veterans but she was never notified.

“I wanted respect to be given to the tribes and the veterans in the unveiling,” she said. “[They did not] give us that option, they just went out in the dead of night—ninja outfits—and put up the signs.”

Despite the political challenges, an impromptu unveiling ceremony was held at the Tuuvi Gathering in Moenkopi immediately after the Western Navajo Fair parade in Tuba City. The event gathered many and even the secretary of state attended with some of her staff members.

In her proclamation, Secretary of State Hobbs acknowledged Native Americans serve in the Armed Forces in great number per capita than any other ethnic group and have defended the country in every major conflict for more than 200 years. She recognized the famed Navajo Code Talkers who helped develop an unbreakable code using the Navajo language to communicate military messages.

Hobbs acknowledged 10 Hopi tribal members who also served as code talkers that developed codes using the Hopi language, they used the codes to assess U.S. Army intelligence in the Marshall Islands and New Caledonia in the Philippines during World War II in the Pacific.

Peshlakai said some people were concerned the highway renaming could cause confusion but she said all the highways are still referenced by their assigned highway numbers.

She said many things inspired her to push this project to the end.

“As a veteran in District 4 all my life, I have noticed the highway signs were [just] numbers,” she said. “We have a population of Navajo and Hopi Code Talkers. We’re always looking for ways to honor their service and a lot of them have passed on from World War II.”

“What really moved me on a personal level is Lori Piestewa. Tuba City [and] Moenkopi [was] her hometown,” she added. “Her parents have dedicated their lives to education and public service.”

She also wanted to bring more recognition to women veterans.

“As a Navajo women veteran, I find that there’s really no recognition,” she explained. “We live in a society where women go to a regular veterans meeting and the guys think that we’re there to cook and serve them coffee. I always wanted a way to honor the service of women veterans more — to give them more dignity.”

She also wanted to help boost commerce within her district that she described as “a unique and beautiful place where many highways intersect.”

“We live in the most beautiful place in the world. Grand Canyon is in my district —Monument Valley, Canyon De Chelly, the Painted Desert, Page/Lake Powell, Antelope Point, Horseshoe Bend,” she said. “We have a lot of international travelers that come through.”

She explained the renaming of the highways provides veterans recognition locally and internationally because of the many tourists. A lot of her work as a state senator has been to help bridge communities from tribal, municipal, county, state and international levels.

Tourism is big in her district and she said it is the backbone that provides the livelihoods of many small mom-and-pop shops.

Overall, she is relieved to see the signs up and she will continue working to bring recognition to veterans and to honor the sacrifices they have made for this country.