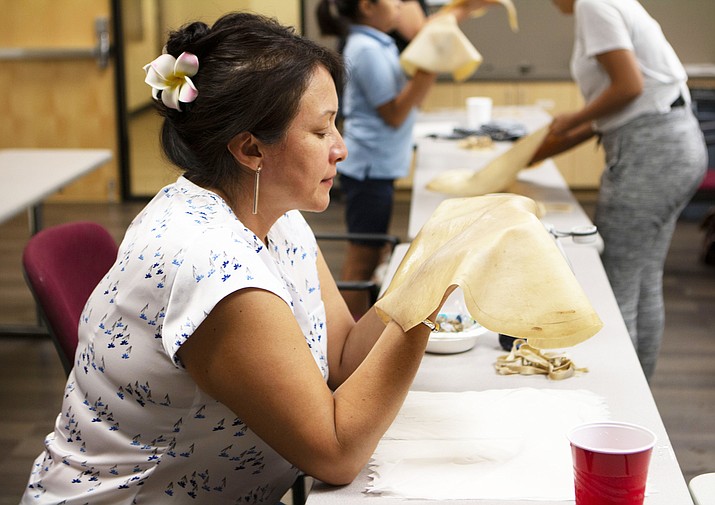 Sheila Lopez blesses the elk hide that will be used to make a hand drum at an Indigenous Art Series event put on by Native Health in Phoenix. (Photo by Annika Tomlin/Cronkite News)

WHITERIVER, Ariz. — On a cool evening, crickets chirp in tall grass. A fresh breeze carries the songs of cicadas, and as members of the White Mountain Apache Tribe come together, a murmur of voices can be heard.

Several dozen men, women and children form a circle around tribal elder Lenora Ethelbah, and she begins to pray. Eyes close and heads bow as they silently remember why they are here, and for whom.

Each year, the White Mountain tribe holds a suicide prevention walk to help raise awareness of a problem that disproportionately affects Native Americans across the country. The event is sponsored by an outreach program of the Apache Behavioral Health Services: Nowhi’ Ida’ Bagoye’ — Life Is Precious.

The walk is a chance to remember those lost but also to support those left behind and struggling to go on.

“We tend to blame ourselves for what happened. We tend to beat ourselves down because we weren’t there,” said tribal member Tonita Harvey, walking for a cousin who died by suicide several years ago.

“I have other friends who have killed themselves, too,” she said, “and it’s just sad. It’s sad knowing that they’re hurting and we can’t come up with an answer.”

Sheila Lopez wraps her hide around a wooden loom. If the hide is too tight, the drum won’t make noise. If too loose, the hide will absorb the sound. (Photo by Annika Tomlin/Cronkite News)

The nation’s suicide rate increased 31 percent from 2001 through 2017, according to the U.S. Centers for Disease Control and Prevention, and American Indians and Alaska Natives die of suicide at a rate higher than any other racial and ethnic group: 22.15 per 100,000 people, compared with 17.83 for whites, 6.89 for Hispanics, 6.85 for blacks and 6.75 for Asians.

The rates are even higher in Arizona. In 2017, the last year for which data are available, the suicide rate among Native Americans in the state was 26.2 per 100,000. Overall, more Arizonans died of suicide that year than car crashes or homicides.

The walk in Whiteriver is just one of many efforts to increase awareness of the problem in Indian Country.

“We are reaching out to young people, those … that don’t necessarily have a direct connection to their homelands or their communities back home and their families and the traditions,” BigHorse said. “We’re trying to give them something here, where they can have a connection — a personal connection — with who they are as indigenous people.”

BigHorse is driven in part by her own experience with suicide.

“I believe I was started on this path because when I was 11 years old, one of my peers, they completed suicide,” she said. “And I was the first one to see it. Changed my whole life.”

At one recent Native Health event, youngsters spent an evening making drums using elk hides. After the drums were finished, the children were asked to look for a personal design inside their drums, an image they could connect with — invisible to everyone else.

“They were able to create something that was solely theirs,” BigHorse said. “It’s all a journey for self-discovery, self-identity.”

One participant, Caitlin Nelson, said the drum-making was a “reminder of who you are and not to lose who you are with the world around you.”

Suicide hits Native youth especially hard. In Arizona, 23 of the 78 Native American suicides in 2017 were among those ages 15 to 24, according to an Arizona Department of Health Services report.

For Suicide Prevention Awareness Month in September, the National Council of Urban Indian Health’s Youth Advisory Council launched a social media campaign called Indigi-Wellness Champion. The effort encouraged youth to post pictures of “how they stay resilient in their everyday lives, how they’re using their culture as prevention, how they are becoming this champion of wellness by caring for both themselves and for others,” said youth council member Faith Bowman, a member of the Stockbridge-Munsee Band of Mohican Nation in Wisconsin.

The campaign used two hashtags to prompt conversation on social media: #ThisIsNative and #CultureIsPrevention. The first aimed to showcase what it means to be Native by highlighting the unique cultural aspects of participants’ lives; the second was used to share culturally tailored suicide prevention tools.

“Our mission and vision is centered upon providing accessible resources to American Indian and Alaska Native youth, and we really wanted to empower them in every way … culturally, spiritually, physically, mentally,” Bowman said.

In Whiteriver, Millicent Kane, a manager for the Life Is Precious program, said it has long been taboo to talk about suicide in the community. One survey of American Indians and Alaska Natives found that suicide and mental health problems are highly stigmatized in Native communities, second only to HIV/AIDS.

Apache Behavioral Health Services hopes to break that stigma with the annual memorial walk and other events.

“If people are starting to talk about it a little bit more, maybe people will have the courage enough to say, ‘I need the help,’” Kane said. “Once we start talking about it, I think we’ll be able to deal with it better.”

The walk lasted only about 10 minutes. Some children were pushed along in strollers, others grasped their mothers’ hands — too young to understand the significance of their steps.

At the finish, parents hushed the little ones for a collective moment of silence. A few seconds later, clenched hands opened and several dozen balloons slipped up and away, into the evening sky.