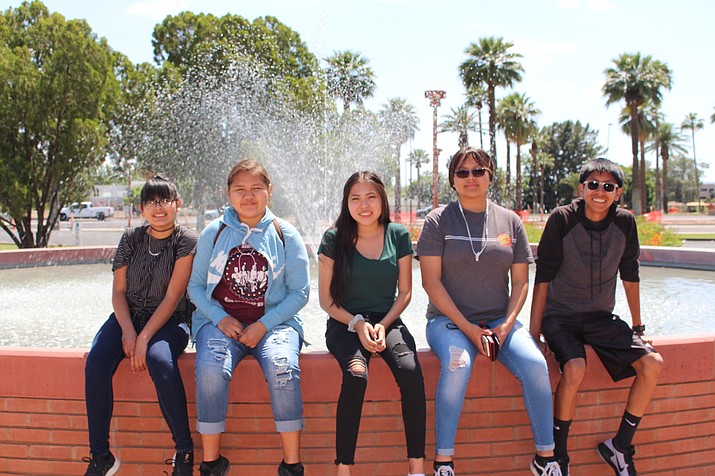 PHOENIX — Six Hopi High sophomore AVID students visited four colleges last week to learn about the majors they offer, the available scholarships and how to pay for college.

The six students visited Mesa Community College, (MCC), Arizona State University (ASU) main campus, Grand Canyon University (GCU) and Phoenix College. Two students are interested in nursing, one in majoring in business and the others are working on deciding which colleges to attend and what to major in.

Eddie Webb, video teacher at Mesa Community College, showed students a video program called Spark and talked to them about Native documentaries students at MCC are working on.

“This is a group of learning based on cultural principles. This is a team sport. One person is not dominant,” he said about the video students working in teams.

Webb said working on documentaries means students are not storytellers, but truth tellers.

Nathan Johnson, who led the students on a tour at MCC, said MCC serves the highest number of Native American students in the Maricopa County Community College area. Majors offered include nursing and engineering.

Irene Alvarez and Catalina Flores from the ASU’s American Indian Student Support Services (AISS) told students the program likes to focus on giving back to the community. She emphasize engagement, empowerment and excellence.

Alvarez said they also prepare students for jobs by helping them with mock interviews. She said AISS has many resources available for students and is also working toward retention, since staff know there is a high college dropout rate among Native Americans.

“Students do better academically when they are engaged on campus (in clubs),” she said.

There are a large number of scholarships available for students at ASU.

Alvarez said attending events for Native Americans also helps students deal with culture shock. She said AISS has free food for the students and has a template to help students with money management issues.

Students who visit AISS also get a first year success coach to help them with the transition to college. The program also has an emergency fund if students run into financial trouble — they can get $400 in return for three hours of community service. The program also help students sign up for health insurance or WIC if they need to do so.

Hopi High AVID students also toured GCU where Tsosie said she was so impressed she may want to go there to major in nursing.

Aidan Barry, who led the tour, said nursing students must start at the university because they cannot transfer in from other schools.

About 23,000 students attend GCU. Barry also spoke about GCU’s business program which is considered hands on and has connections in the Phoenix area, but also throughout the state and the nation.

While GCU is Christian based, unlike many Christian schools the students do not have to attend religious services and they consider the university to be inclusive and accepting of people from all walks of life.

Jay Jones gave students a tour of Phoenix College letting them know that this community college is preparing to celebrate its centennial birthday.

Unlike many colleges that tear down buildings when they get old, Phoenix College keeps tradition going by fixing up the old buildings.

Phoenix College, which is known for its basketball teams, offers majors in nursing, business and criminal justice among its 180 degree programs.

“We have a lot of Native American students,” he said.

Phoenix College is also known for having students from 100 countries, thus its international services program.

Women Rising is one of 30 clubs on campus to help women who want to go into business.