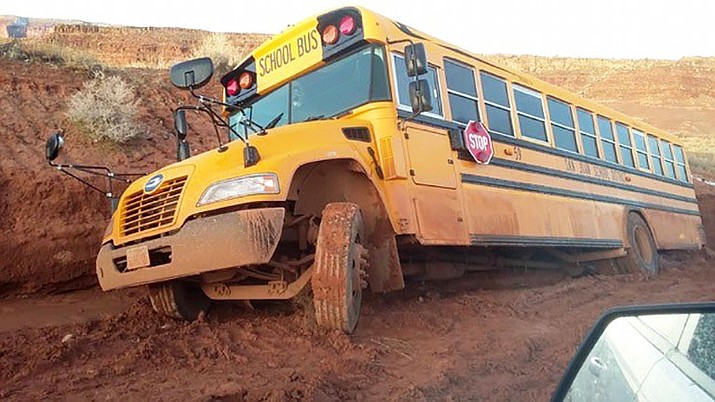 Schools in tribal areas face a number of challenges, including roads, which can make it hard to get students to school. (Photo courtesy San Juan County, Utah, Roads Department)

WASHINGTON —Classrooms at Keams Canyon Elementary School are noticeably emptier during the winter and monsoon months.

That’s when Principal Gary Polacca says heavy rains turn the dirt roads stretching across the Hopi reservation into “muddy sinkholes,” making it hard for school buses to reach students’ homes for risk of getting stuck in the mud.

Students, who have a harder time getting to school on their own, are stuck at home for the day – or the week, depending on when the weather clears up.

“They just can’t get to school,” said Polacca. The school dedicates some of its budget to buses, he said, but it can’t fill potholes or pave roads. “We’ve done what we can.”

Of the many problems facing tribal schools, Polacca said, impassable roads are “not the most prevalent problem, but it is the most annoying one.”

And it’s not a problem unique to the Hopi.

Three-fourths of roads owned by the Bureau of Indian Affairs are unpaved, leaving schools on reservations to spend money on frequent maintenance for the buses that have to travel those roads.

The graduation rate for American Indians/Alaskan Natives in public schools in 2016 was 72 percent — lower than any other race or ethnicity, according to the National Center for Educational Statistics. That rate drops to 49 percent for students in Bureau of Indian Education schools.

A Navajo student walks away from a school bus that was stuck in the mud on an unpaved road. School officials say when buses aren’t stuck, they’re often damaged by rutted roads. (Photo courtesy of San Juan County, Utah, Roads Department)

There are myriad reasons why Native children don’t graduate from school, said Acting Superintendent of Navajo Schools Anselm Davis, including “the trauma that students come to school with, and then the changing social life of the younger generation.”

“There are adverse conditions in family life, in community life,” Davis said. “There’s a whole dimension of issues out there that impact students on a day-to-day basis.”

When sick days, religious holidays or other reasons children might have to stay home are added to the absences caused by bad roads, he said, it puts students in situations where they “aren’t getting the kind of attention on their lessons and the learning process, and as a result of that they tend to fall back little, bit by little bit.”

Davis said schools on reservations do their best to mitigate any problems children might have that would impact their education. Navajo schools have implemented different programs over the years to improve attendance and graduation rates. Some work therapy or trauma services into school programs, while others have provided free food to struggling students.

But transportation is a challenge out of schools’ reach.

Like many rural areas, homes on the Navajo and Hopi reservations can be scattered and there is often not a network of paved roads that connect homes to schools or businesses.

With the majority of BIA-owned roads in the U.S. unpaved, schools on reservations are forced to shell out money for frequent maintenance on school buses that had to travel those roads.

In April, Gila River Indian Community Gov. Stephen Roe Lewis told a Senate Indian Affairs Committee hearingabout the decrepit state of the 306 BIA-owned roads on his reservation. Some were unpaved, others were cracked and bumpy. Others still were missing critical safety features like stop signs.

“This is a critical concern for education in Indian Country,” Lewis said, not to mention “the safety aspect too, if those roads aren’t adequately maintained.”

Sen. John Barrasso, R-Wyoming, introduced a bill in January to increase funding for upkeep of roads on reservations, including updating safety features and paving roads. Similar proposals by Barasso have died in the last two sessions of Congress, but Lewis said the bill could be a “game-changer” for schools.

“On the Navajo Nation, where thousands of miles of roads are unpaved, poor road conditions result in impassable bus routes that make Navajo students more likely to miss school than their non-Native peers,” Udall’s statement said. “To truly uphold the United States’ trust responsibilities to these students, the Navajo Nation, and all of Indian Country, we simply must do better.”

Advocates say there is plenty of room for improvement.

Constant travel on gravel roads leads to excessive wear and tear on school buses — side mirrors shake off, batteries fall out and even the emergency hatches on bus roofs can come loose.

“The wear and tear on those buses if they go on dirt roads or gravel roads is astounding,” Lewis said at the hearing. “And schools have to pay for that, not the BIA.”

Polacca estimates he has to pay for a major bus repair at least once a month, which takes the bus out of rotation and forces drivers to cram more children into fewer buses.

“A lot of the roads become like a washboard. It takes a lot of toll on our school buses,” Polacca said. “And of course we have students living all over. So there are times where we do have to go out and pick up students who live on those roads.”

Polacca’s school has talked about planning bus routes along the state highway that runs through the reservation to cut down on maintenance costs. But he knows some students can’t make it to the main road, and he does not want to make it even harder to get to school.

As it stands, teachers at the school try to work with students to send assignments home so they can continue their education without being in school. But the students are still counted as absent.

“It’s frustrating,” Polacca said. “These are young children. They want to learn.”