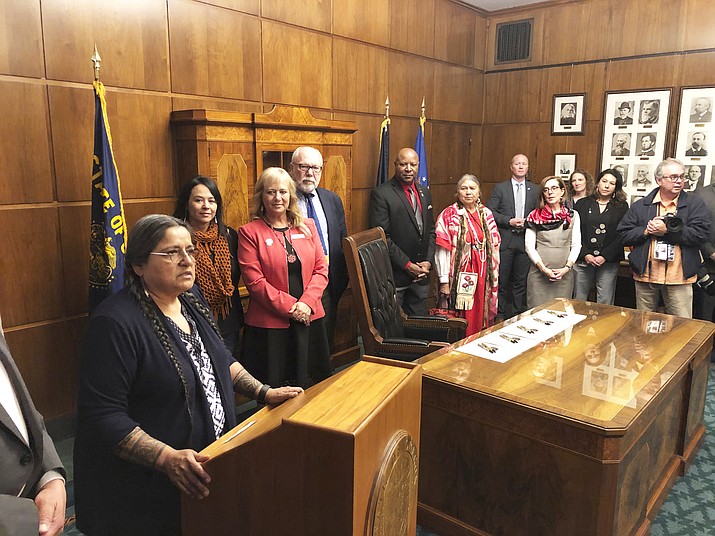 State Rep. Tawna Sanchez, a Portland Democrat and the only Native American in the Oregon Legislature, speaks in Salem, Oregon, after Gov. Kate Brown signed a bill directing the state police to study how to increase and improve criminal justice resources to solve cases of missing or murdered Native American women. (AP Photo/Andrew Selsky)

SALEM, Ore. (AP) — Native American women have gone missing or been killed at alarming rates, federal and private studies show, and there is growing concern that confusion by law enforcement over who has jurisdiction can lead to lax pursuit of cases and insufficient data.

Oregon, home to nine federally recognized tribes or confederations of tribes, has now joined a movement to account for and solve more of the crimes.

Patricia Whitefoot, whose sister disappeared in 1987 in an unsolved case, watched as Gov. Kate Brown signed a bill Thursday that directs the state police to study how to increase and improve criminal justice resources on these cases.

“As families, we simply seek justice and healing of the heart,” Whitefoot told lawmakers in written testimony last month.

After Brown signed the bill, Whitefoot told a reporter her sister, Daisy Mae Heath Tallman, was 29 when she went missing.

She was Whitefoot’s youngest sister and lived with her in Washington state. She would be gone for long periods, fishing for salmon in traditional spots along the Columbia River that divides Washington from Oregon and visiting relatives on the Warm Springs reservation in Oregon. Then, in the autumn of 1987, she never returned to her home in White Swan, Washington.

“She was just a very self-reliant, self-sufficient individual who could take care of her business and what needed to be done, fiercely independent,” said Whitefoot, who wore a red dress —- representing missing and murdered indigenous women — otter furs, shell jewelry and moccasins to the bill signing ceremony.

Travis Hampton, superintendent of the Oregon State Police, told attendees, many of them Native American women, that he was emotionally invested in bringing results. He said he had been concerned about a lack of state police jurisdiction in Indian country but that it would be compensated for with collaboration among federal, state and local law enforcement.

“I will treat these women and girls; these sisters, these mothers, these daughters, as if they were my own,” he said to applause.

The bill is named Savanna’s Act, after Savanna LaFontaine-Greywind, who was killed while pregnant in 2017 in North Dakota. Her baby was cut from her womb but survived.

In urban areas alone, some 500 Native American women in 71 U.S. cities vanished or were killed, the Urban Indian Health Institute, a division of the Seattle Indian Health Board, reported last year. Most of the cases cited occurred since 2010.

On some reservations, federal studies have shown women are killed at more than 10 times the national average. Predators believe they can get away with abducting or killing American Indian women there because of scant law enforcement presence, said Rep. Tawna Sanchez, chief sponsor of the Oregon bill and the only Native American in the state Legislature.

Some tribes have no law enforcement, while the FBI might be able to dedicate only one agent to investigate crimes on sprawling reservations, Sanchez said.

“All of these jurisdictional issues make it really, really difficult for people to know and understand what they can and cannot do,” she said. “Most tribes don’t have the ability to deal with anyone around a criminal issue on a reservation.”

The new Oregon law, which takes effect immediately, directs the state police to study how to increase and improve state criminal justice protective, responsive and investigative resources. It also calls for better systems for reporting, identification, investigation and rapid response to future and past cases.

The state police must report its findings by September 2020.