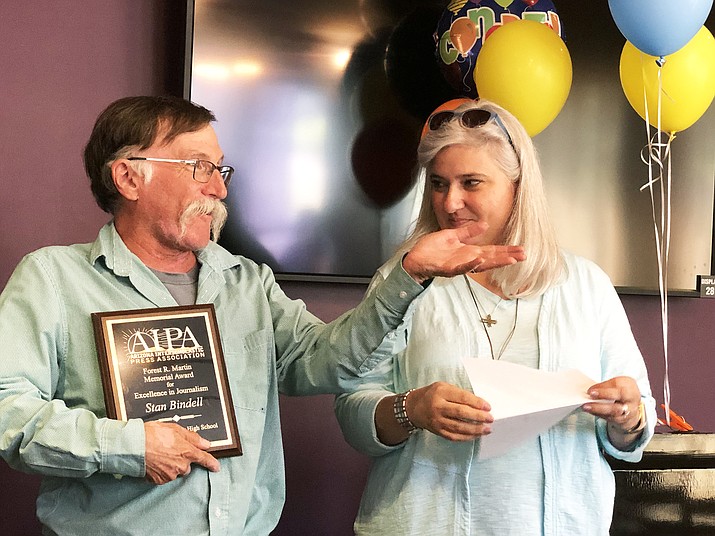 PHOENIX — Stan Bindell, Hopi High School media teacher, received the Forest R. Martin Memorial Award May 4 — the highest state award that a journalism teacher in Arizona can be given.

Bindell attended a luncheon that took place at Canyon Grill 49 in Phoenix where he was given the award.

Melanie Allen, president of the Arizona Interscholastic Press Association (AIPA)and a journalism teacher at Moon Valley High School, said the purpose of the award is to recognize the hard work and dedication of advisors in the state of Arizona.

Bindell was nominated by the AIPA members.

When Bindell heard his name called as the award winner, he was surprised because he believed another journalism teacher deserved the award.

“It is such a great honor. I wouldn’t have been given the award if not for our hard working students. It is great that our program is recognized,” Bindell said.

Hopi High media student Amber Labahe was proud of Bindell when she heard about his award. She thinks Bindell is a great teacher and he works hard.

“Bindell always made encouraging words to me and everyone else around me. He told me to keep on writing no matter what. It inspired me to go into journalism after high school,” Labahe said.

Bindell has been teaching at Hopi High School for 23 years. During that time, his students have won state awards every year.

Bindell said his students’ awards are more important than his own. He said he is always thrilled when his students win awards because his students compete from a small Native American school.

“The purpose of journalism in high school is to allow students to use their voice and knowing the importance of it, whether it’s expressing an opinion or sharing information with the community,” Bindell said.

Ellyse Fredericks is a media student at Hopi High School.