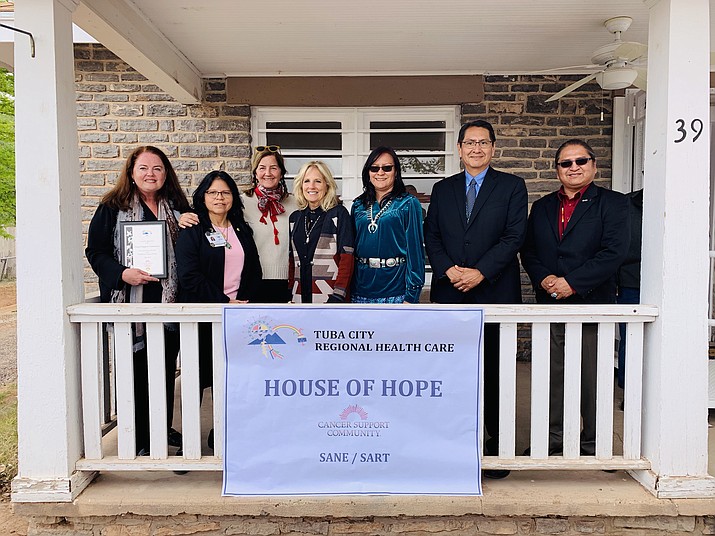 Navajo Nation President Jonathan Nez joins Dr. Jill Biden, CEO of TCRHCC Lynette Bonar and other health industry leaders in Tuba City at the House of Hope, the new cancer treatment facility on the Navajo Nation. (Office of the President and Vice President)

TUBA CITY, Ariz. — The Navajo Nation president welcomed Dr. Jill Biden and other health industry leaders to Tuba City to view the ongoing development of the first cancer treatment center on the Navajo Nation and the first on any reservation in the country.

Biden’s advocacy for cancer patients has included support for this effort during the Obama administration and as part of the Biden Cancer Initiative.

The culturally-adapted cancer care center at TCRHCC will provide oncology services to the Navajo and Hopi people, and will provide support groups and other services for people who suffer from various types of cancer. 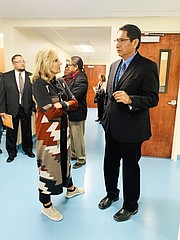 Why the Navajo Nation?

With 350,000 members, the Nation is about the size of West Virginia.

“How do you think the people of West Virginia would feel if they didn’t have any cancer care?” CEO of Tuba City Regional Health Care Corporation Lynette Bonar asked the late Sen. John McCain when she was advocating with him for TCRHCC to receive more resources.

Both Bonar and Navajo Nation President Jonathan Nez said the new cancer treatment center will help patients who currently have to travel hundreds of miles to receive treatment in Flagstaff. Nez noted that many Navajo cancer patients are required to receive treatment several times a month, but often lack the resources to travel long distances. Because of these circumstances, many patients do not receive the adequate treatment they need.

“Prior to uranium mining, Navajo people were virtually cancer-free with the lowest lung cancer rate of all Native American nations. Today, cancer is the second leading cause of mortality among the Navajo people,” he said. “Cancer rates doubled on the Navajo Nation from the 1970s to the 1990s. The federal government has provided the Superfund to clean up the open mines, yet the resources are limited compared to the actual number of abandoned mines.”

Nez addressed the taboo of talking about cancer for Navajo people saying the word for cancer basically translates into “there is no cure for cancer.”

“The loss of hope that they feel touches them and their whole family,” Nez said. “What you all are doing here, I’m hoping that we change that Navajo word to where it can be seen that cancer can be overcome.”

“It is all about hope,” she said. “I love the name, the city of Hope. I love that because when we were going through this with our son, the thing that kept us going was hope. There will be new therapies, there are new trials that you can get into — things on the horizon that people can cling to. That’s the message that people want to hear. And I know that as a mom who has lost a child.”

What is available for patients now?

Although the treatment center just opened, specialists are already available. These include hematology and oncology specialists.

“We’re starting out with hematology and oncology should be coming on soon,” Bonar said. “They can use other technologies that are working to eradicate a cancer diagnosis. It’s really great that we have a newly trained oncologist that stays up with all the evidence-based practices.”

Bonar, too, is sensitive to the taboo of discussing cancer with Navajo people.

“We hope that working with Cancer Support Community and working with our support groups that people realize technology is changing,” Bonar said. “And there is a chance for hope. And that’s why we called our house ‘The House of Hope; and we really hope to integrate that hope.”

The cost of medicine

Bonar explained that in the next six months, the new cancer center will concentrate on people in the immediate Tuba City area, which is necessary because of funding.

“The reimbursement issues are real,” Bonar said. “As we know, medication is very expensive. We can’t break our program over medication, so we really need to work with the federal government over Medicare reimbursement.”

Bonar said TCRHCC has worked well with the state of Arizona on Medicaid and that has been a positive working relationship.

“They are covering specialty medications and that’s really why we can start, because of Arizona,” Bonar said, adding that it took a year and a half to get the approval but those working on it did a great job.

The cancer center saw its first patient May 21.

“We just couldn’t wait anymore,” Bonar said. “We had heard from one of our family practice doctors that we had to send three patients out — just waiting.”

Oncology medicines will be available the first week of June, Bonar said.

Bonar said the initial start-up costs were funded by the TCRHCC and the Cancer Support Community.

She said the center is in need of additional equipment to make the facility fully-functional. Other partnering organizations include the Barbara Bradley Baekgaard Family Foundation, Biden Cancer Initiative, Eisai, Merck and Pfizer.