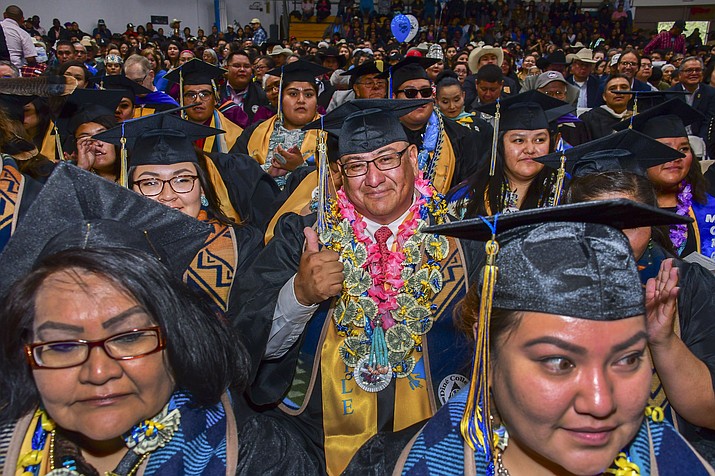 Diné College recently graduated 207 students who received diplomas or certificates. The graduation was the fourth largest in the college's history. (Photo courtesy of Ed McCombs/Diné College)

The 2019 graduation represented the fourth largest graduating class in the history of the college — established in 1968 and the first tribally-controlled institution of higher learning in the U.S.

“Congratulations to the (Diné College) Class of 2019,” said Commencement Speaker and Navajo Nation President Jonathan Nez. Nez is a former Diné College student. “Your ancestors never gave up, just as you sitting here today — you never gave up,” he said.

Tom Platero, executive director of the Navajo Nation Office of Legislative Services, the board chairman at Navajo Technical University in Crownpoint and a 2000 Diné College graduate, earned a certificate in Navajo Nation Leadership. Platero recommended the certificate for chapter officials and council delegates.

“I learned so much from taking this program,” Platero said.

The commencement ceremony was filmed by the Navajo Nation Film Office and streamed via Facebook where it reached about 24,000 and saw 12,000 view the event, according to livestream data.

“This year the Marketing and Communications Department organized a web livestream of the entire graduation with a pre-show,” said George Joe, Diné College director of Marketing and Communications. “We wanted to broadcast the graduation ceremony to others beyond the Navajo Nation so they could join the celebration. We got a lot of feedback from people who watched from across the country.”

“I want to continue to make a difference,” said biology graduate Cordell Chee of Chinle.

“One step at a time. For myself, for my family and for the environment,” Chee said.