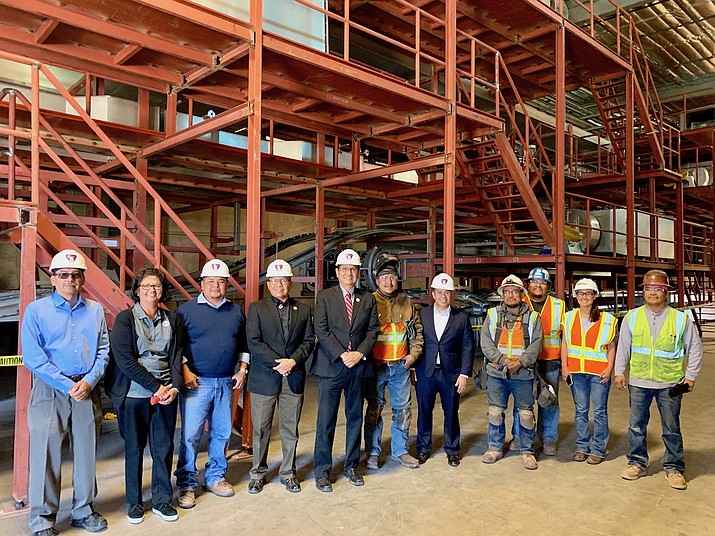 CHURCH ROCK, N.M. — On May 3, Navajo Nation President Jonathan Nez and Vice President Myron Lizer viewed the progress of a nitrile glove manufactory that has the potential of creating 350 new jobs on the Navajo Nation when completed.

The group visited the facility where workers are currently assembling heavy equipment to produce the nitrile gloves, which is part of the multi-phase project that includes an investment of more than $49 million from Rhino, LLC.

“We greatly appreciate the visit and support of Congressman Luján. We had the opportunity to show the Congressman the potential of this project in terms of tax revenue and the opportunities it would provide for many of our Diné people and their families,” Nez said.

“Supporting economic growth and good-paying jobs for the families of Navajo Nation is a top priority for me, and I was inspired by the passion I saw among tribal leaders and Rhino, LLC today,” Luján said. “I look forward to returning to Church Rock in the near future to see the positive impact this economic investment is providing to our communities.”

“This is a great example of partnership between the private sector and others to bring economic opportunities to the Navajo Nation and it’s very important that we have support from leaders such as Congressman Luján in order to complete this project. We also would like to see congress reconsider the Opportunity Zones to include the Church Rock community and beyond,” Lizer said.

The manufacturing facility will become a supplier of nitrile to be sold to government agencies, medical facilities, and food and retail industries once completed. Navajo Nation is looking at options to further expand the project to increase its potential.

Rhino, LLC CEO Mark Lee said he will host an appreciation day for the Navajo people on May 18 beginning at 1:00 p.m., in which the public will be invited to tour the Church Rock Manufacturing facility and enjoy food and refreshments.

“We want to show our appreciation to the Navajo people and we want to be a positive part of the community,” Lee said.