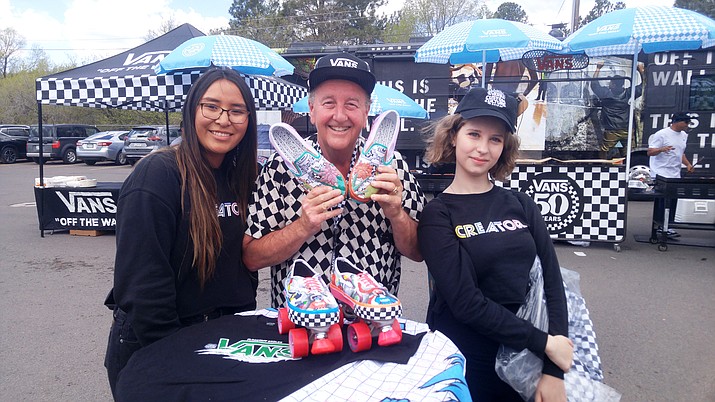 The students at Flagstaff High School jammed out to a performance by K. Flay and Vans corporate served hot dogs, pizza and gave out Vans swag.

Steve Van Doren, vice president of Events and Promotions, who is also the founder’s son, cooked hot dogs and took a few minutes to praise the students.

“They had big competition,” Van Doren said. “I’m talking thousands of high schools. For Flagstaff High School to win. I can see why. It’s beautiful.”

Nicole, who designed the Off the Wall shoe, said winning was surreal.

“It feels like a really weird fever dream that any second now I’m going to wake up and my mind is going to be like, ‘It’s just a cruel joke,’” she said.

But when she realized winning was not a joke, Nicole said art is what she loves.

Alyssa was still in shock at the win. She said she had tried to imagine what it would feel like to win, but she couldn’t.

“And feeling it now? I still don’t even know what I’m feeling. I’m just so excited and happy,” Alyssa said. “I’m just so happy right now that I can’t even process.”

But Alyssa, like Nicole and Quick, recognized that the Flagstaff community had everything to do with Flagstaff High School winning.

“I want to say thank you to everyone who voted for us,” Alyssa said. “It was crazy the support they were giving us was awesome. Without them, this wouldn’t have been possible.”

As for the future, Alyssa, as a sophomore still has time to decide.

Alton Williams, Alyssa’s father, said he had just been told that there might be a band playing, but he had no idea that Flagstaff High School had won the whole competition.

“It’s awesome for Flagstaff and the community and the art students here at Flagstaff High School,” Alton said.

Alton had nothing but pride for his daughter.

“She’s amazing, she’s so creative and we’re just lucky to have her as a daughter,” he said.

Tina, Alyssa’s mother, was also on hand at the school for the announcement, along with Alyssa’s younger brother and sister.

“I’m just really excited for everything that she has started and then ending with this,” Tina said.

Tina said the girls probably didn’t think they would get this far in the competition.

The winning shoes for both the local and off the wall categories. (Kevin Moriarty/NHO)

“It’s just amazing that the two just really got along so well and they are able to share and show their art and everything they have a passion for in the creations,” Tina said. “I’m just really excited for both of them. The community support, I really appreciate everyone coming together.”

Tina also said she appreciated Quick as a teacher for her daughter.

“Ms. Quick, she’s such an awesome person,” Tina said. “Being there for her students all the time and just going more than a 100 percent. She went more than that, being a support person for both of them and for the school.”

Quick, along with most of the approximately 1,400 students, did not know Flagstaff High School had won the contest.

“I really didn’t know,” Quick said, shortly after the announcement. “I am on this really crazy cloud of fog and happiness. It feels incredibly surreal. It’s almost indescribable.”

Quick affirms that she did think it was possible that Flagstaff High School could win the whole thing.

“You know how sometimes in your life, when you feel like you have a very clear path and, I don’t know, I just had this persistent clear thought that it could happen and that it might happen,” she said. “My students, and the girls, the whole time, we were just on this path. To watch it come to fruition… I could just see it. It’s still very surreal.”

Alyssa Williams (second from left) takes a picture with her dad, Alton and mom, Tina, and younger brother and sister. (Kevin Moriarty/NHO))

Quick said this is what being a teacher is all about — teaching students to go after their dreams and seeing if they can come true.

“What I loved about this whole thing is the recognition for all the schools, especially once the top 50 got announced,” Quick said. “Watching the publicity for the other schools, all the excitement, all the hype… and the overall recognition for what these kids are doing in school every single day already, but now it’s on a media stage, it’s a really beautiful thing.”

The fact that the contest was about art made it that much more special.

“I’m super stoked my kids won,” Quick said. “I love that. But I think the overall importance of this is to showcase the arts, is to showcase what kids are doing, how it can change student’s lives, how amazing it can be for individuals just to simply create. That’s really been at the forefront of my thoughts today and since the whole duration of the competition.”

The other part that made it special for Quick and the students, was how Flagstaff came together to support them.

“That was such an awe-inspiring, amazing collective effort of just excitement and cheer for my students and the school and my program,” she said. “I just don’t have any words. I’m speechless. Predominately, I’m speechless because it was an immense act of love from so many individuals. It’s hard to really describe and think back and give back in the same way that was given to us.”

Kristy Van Doren, Van’s senior director of brand for North America, and the granddaughter of the founder, said it really was the outpouring of support from the community once the public voting started that pushed Flagstaff to the top of the list.

“We’re all about creative expression,” Van Doren said. “This is how kids express themselves. They use our shoes as the canvas. It’s just something they did in the 80s.”

“If my dad wasn’t paying attention, we would never have had the checkerboard shoe,” she said. “So, what is the next checkerboard for us? We were just seeing kids draw on their shoes and that’s how we came up with custom culture. It’s just an amazing program that gives back to the communities and gets the communities involved. And you just saw the voting and that’s how Flagstaff won.”