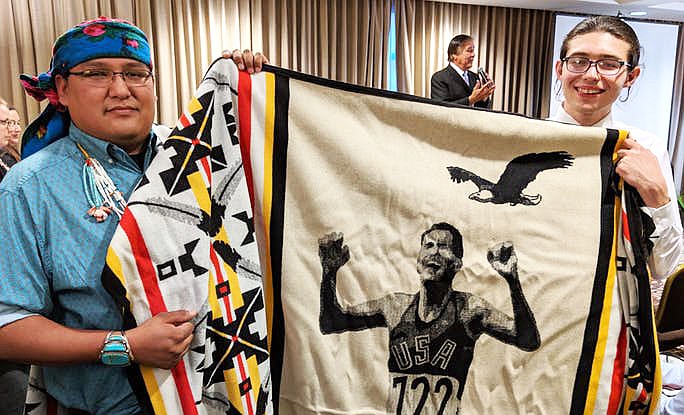 ALEXANDRIA, Va. — Gold medal-winning Olympian Billy Mills, Lakota, hosted his fifth annual Dreamstarters closing ceremony April 30 in Alexandria Virginia just outside of Washington D.C. to wrap up a four-day Dreamstarter Academy in which Native youth — who were awarded 10,000 grants to pursue their dreams — were honored and wrapped with an official Billy Mills-designed Pendleton blanket.

This is the fifth year celebrating dreams and aspirations of 10 Native youth from the ages of 14-30 years-old in the Dreamstarter’s ‘Running Strong for American Indian Youth,’ an organization championed by Billy Mills.

For the past five years, Native youth have applied annually for the chance to be awarded $10,000 in support of fulfilling their dreams affecting Indian Country. The work does not have to occur within the confines of a reservation and each year the applicants needed to apply while adhering to a theme. This years' 2018-19 theme was entrepreneurship. Each year 10 applicants are awarded grants.

At the event, Mills expressed his reason for contributing to the livelihoods of Native youth and to the Dreamstarters program.

“On October 14, 1964, I laid footprints on Mother Earth that forever altered my life,” he said. “That moment was a gift, and Patricia and I wanted to give back. We decided to take one of the virtues and values of tribal nations, in this case the Lakota, we took the virtue of the giveaway and made our own life, a lifetime giveaway.”

After prayers, thanks and honor songs, Steve Hill, Tuscarora, sang and offered each of the youth eagle feathers.

Hope Gamble, 14 and Taylor Eddie, 16 both from the Navajo Nation, take a moment for smiles at the Dreamstarters closing ceremony. (Photo/Vincent Schilling)

Several of the youth offered comments to Indian Country Today about the closing ceremony, as well as the four-day academy in which youth learned how to coordinate their efforts, work with mentors and best practices on moving their dreams forward.

“This was a great honor. It didn’t seem like a conference at all. It was more like a ceremony. It was a good cultural experience mixing tradition and helping us toward our goals. It was like a prayer,” Jacob Crane, Tsuut’ina Nation, said.

Freddy Gipp, who in addition to becoming a Dreamstarter was named a “25 Under 25 Native Youth Leaders” by United National Indian Tribal Youth (UNITY), said the event was a great experience.

“I want Indian Country to know how to utilize powwows as economic opportunities… I truly feel this is a dream come true to have this opportunity, I feel fortunate, grateful and blessed,” Gipp said.

Hope Gamble, Dine’, who is seeking to tell Navajo creation stories through comics, said she was also appreciative for the opportunity.

“This is such a great way to help publicize what I am doing. If it wasn’t for Dreamstarters, I might only be able to publicize my work to my own school about it,” Gamble said. “With the grant, it can go out further in the public. My end goal is to teach more of my culture.”

At the evenings’ end, Billy Mills draped blankets over the shoulders of the Native youth.

More information about Running Strong for American Indian Youth, and Dreamstarters is available at http://indianyouth.org/2019dreamstarters.