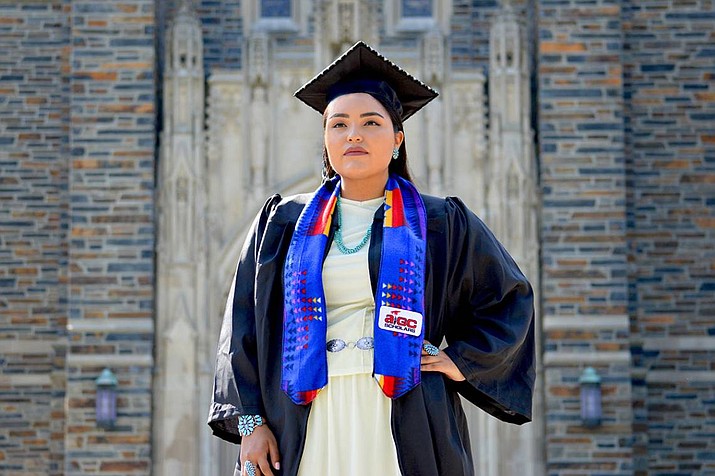 Shandiin Herrera from Monument Valley has helped raise the profile of the Native American community on campus. (Photo courtesy of Duke University)

DURHAM, N.C. — Senior Shandiin Herrera came to Duke understanding she wouldn’t find many other Native American students on campus. And the first year was harder than she expected.

Four years later, she leaves as Duke’s first Native American Udall Scholar and as a campus leader who has advocated for more institutional support for Native students. Herrera has helped members of the Native American Duke community better connect and make their presence known on campus.

“It’s important to understand we are here,” said Herrera, who also just won the Undergraduate Student of the Year Award from the American Indian Graduate Center and was recognized as a 2019 Champion for Change by the Center for Native American Youth at The Aspen Institute.

“There are currently 573 federally recognized tribes in the US, each with diverse cultures and histories, despite what a lot of history classes and Hollywood films would have you think,” she said.

Herrera, whose mother is Navajo and father is Latino, grew up in Monument Valley, Utah, on the Navajo Nation, which spreads out over three states and is the size of West Virginia. She is the first from her high school, Monument Valley High School, to attend Duke.

She went on to help found the first Native American sorority at Duke. Alpha Pi Omega currently has six members. She served as both the treasurer and powwow chair for the Native American Student Alliance. And she spent the summer in Washington D.C. as a 2018 Udall Native American Congressional Intern.

“When I was little, I thought (Duke) was just a basketball team,” said Herrera, whose older brothers have always been avid Blue Devil fans. “I didn’t know it was a school.”

Herrera found her way to Duke thanks largely to her parents. Her mother, who has an MSW and worked as a high school counselor for 30 years, put her daughter in Head Start at the age of 3. Her father, a former coal miner, and longtime school bus driver, drove her on the school bus an hour away each day so that she could attend a better public-school. Her mom identified national enrichment programs for gifted youth for her daughter.

It was on a program for middle-schoolers that Herrera first visited Duke — and fell in love with it. “It was my sense of what college should be,” Herrera said. “I felt studious. It had a lot of nice facilities — food places, libraries, a gym. I knew I’d have everything right here.”

At College Horizons, a conference for Native American high-schoolers, she met Steve McLaughlin, associate director of undergraduate admissions, who encouraged her to apply.

Once at Duke, the adjustment was harder than Herrera had expected. She bonded with three other Native American students in her class of 1,700. But navigating financial aid was not easy, despite being a Gates Millennium Scholar with tribal scholarships.<

“I didn’t know how to ask for help or who would understand my circumstances,” she said.

Even harder was encountering cultural and historical misconceptions from professors and students. “There is so much ignorance about Native people,” Herrera said. “It’s difficult when you don’t see yourself represented in anything.”

The situation improved in junior year. She found supportive people at the Sanford School of Public Policy when she declared her major. Deondra Rose, an assistant professor of public policy, and Elise Goldwasser, director of undergraduate internships were “amazing supporters, both academically and in my personal endeavors,” Herrera said.

She went on to help found the first Native American sorority at Duke. Alpha Pi Omega currently has six members. She served as both the treasurer and powwow chair for the Native American Student Alliance. And she spent the summer in DC as a 2018 Udall Native American Congressional Intern.

Herrera is determined to use her education and leadership roles to serve her people through enhancing policies for Navajo families living on the reservation. In the immediate future, she will work at the nonprofit Lead for America, assessing advocacy and policy proposals for the president of the Oljato Chapter of the Navajo Nation. But down the road, she is also considering law school.

She is leaving Duke proud of the education she has received and empowered by the change she has been a part of. Herrera said she’s also hopeful that Duke will continue to make strides towards creating a more welcoming community for Native American people. “This isn’t a case of Duke being bad,” she said. “We’re in this together.”

Herrera is particularly excited about the summer reading selection for the incoming Class of 2023. They will be reading “There There” by Tommy Orange — a novel about urban Native Americans in Oakland, California.

“I cried when I heard,” she said. “It’s so wonderful to think that all the first-years will start their journeys at Duke with the basis understanding that native people are still here. This is the representation we need. This book is a great story of the complex issues many Urban Natives experience.”

Herrera hopes to continue to inspire youth to pursue higher education, realize the power in their voice, and become active in their communities. “I believe education is the powerhouse for reinvigorating cultural norms and I am proud to have had the opportunity to contribute to enhancing the Duke experience for Native students.”