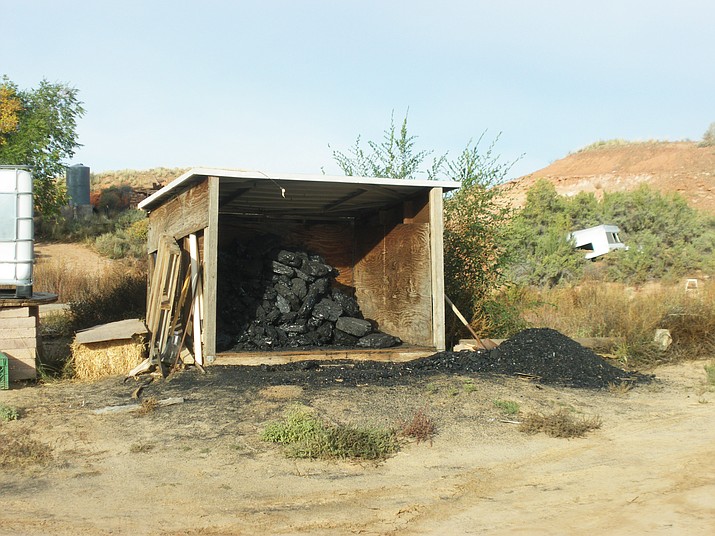 Coal is stored at a Hopi Home in Hotevilla Village on the Hopi Reservation. (Photo courtesy of Morgan Miles Craft)

FLAGSTAFF, Ariz. — With Mojave Generating Plant long gone, the Navajo Generating Station (NGS) set to retire this year and the Kayenta Mine already closed, coal is making a grand exit from Indian country. Yet homes across both nations continue to burn coal, many with few other options.

The original inhabitants of the southwest learned about burning coal from their Aztec neighbors to the south before recorded time, evidenced in specimens of coal-fired pottery unearthed near Hopi settlements at Jeddito dating from the 13th century.

With coal seams discovered running through the Hopi Mesas, the compressed, slow-burning fuel has always been a source for heating and cooking in the region. Once huge deposits were discovered around Black Mesa, coal became an exploitable commodity on the modern Hopi and Navajo nations bringing in vital resources over the decades. Navajo and Hopi coal fired the Mojave Generating Plant from 1971 to 2005 and has fueled NGS, near Page since 1975.

Coal has certainly made life easier, even as it has polluted the air, fouled the water and stripped the land held sacred by both tribes. For almost forty years it has bolstered the budgets of the Navajo and Hopi governments to the estimated tune of $54 million last year from the Navajo Generating Station and Black Mesa Mines alone. Though at 3.3 percent royalty – the tribes originally had to settle for that number, which has been historically far less. And while environmentalists cheer the closure of the power plant and mine, factions within both tribes fought hard for a way to keep them open to save vital tribal revenue and jobs. Both are going away.

A hot debate over coal and profits

Outside of the profit incentive and its effect on tribal budgets and services, the benefits from mining and power generation have been hotly debated. By closing NGS and Kayenta Mine, the environmental benefits each year are significant: reduction of 20 million metric tons of CO2 and 472 million pounds of mercury, selenium and arsenic pumped into the air; 1.3 million tons of coal waste; 1200 acre-feet (391 million gallons) of water from the Navajo Aquifer and 28,000 acre-feet (nine billion gallons) of water from Lake Powell. In 35 years, the mine used 45 billion gallons of Navajo aquifer water. And in the byzantine world of western water rights, the tribes will have to fight in court for a share of the saved water. With virtually none of the power generated at NGS or the saved water accessible by either the Hopi or Navajo nations — 30 percent still don’t have electricity and 40 percent lack running water — there is still much work to do.

Burning coal in homes is another issue altogether. According to the EPA, only 25 percent of Navajo homes use electricity for heating, and another 11 percent use bottled gas. The rest burn wood and coal. With coal-burning slower and hotter it’s the preferred fuel during cold winter months when fires burn day and night. And it’s cheaper than wood, where most homes using coal spend $200 a season. Gas is twice that amount and the equivalent cost in wood is around $1,250.

Coal smoke is poisonous. With long term respiratory and cardiovascular health effects aggravated by sustained exposure, it’s potentially and disproportionately affecting lives every day in Indian country. Census data shows that people on Indian reservations are five times more likely to suffer from asthma than those outside the reservation. A 2015 study by the World Health Organization linked emissions from wood and coal to increased respiratory and cardiovascular mortality resulting in 10,000 preventable deaths in America. And it’s on the reservations where the highest percentage of coal is being used. Yet the U.S. Geological Service Survey and Dine College found that more than a quarter of the homes burning coal on the Navajo nation were using old, worn and damaged stoves that were not designed for coal, had cracks or were improperly ventilated. Some stoves were not connected to an exhaust at all, and many are simply using converted 55-gallon drums, with poisonous results. It’s estimated that over 5,000 home stoves require replacement on the Navajo reservation.

In search of a solution and an alternative to coal

The Hopi Health and Human Services Department is acutely aware of these challenges.

“With the loss of free coal from the Kayenta Mine, we are concerned that people will burn more wood, which is already scarce on our reservation,” said Director Lorencita Joshweseoma. “We’re also conducting tests alongside the University of Arizona of the air in homes across Hopi that burn wood and coal, and those results are not good. So we must come up with alternatives.”

Joshweseoma stated the tribe is looking closely at various programs that are being proposed.

The Southwest Indian Foundation, based in Gallup, New Mexico, has launched a donation-funded stove replacement program on the Hopi, Zuni and Navajo reservations. Utilizing their own teams for the installations, they have a goal of 250 stove changeouts annually. At a cost of up to $1,000 per household, the program is based on helping families that can prove the need for assistance through medical or financial distress.

Red Feather Development Group, a non-profit organization, is working on educating Hopi and Navajo families about the risks associated with home heating. They have developed a free “Do-It-Yourself Home Heating” workshop where attendees learn how to reduce risks of fire and respiratory disease, as well as discovering potential ways of saving money. Foreseeing the strain that the coal mine closure would have on families, Red Feather researched and began sharing alternative heating methods. The hope of the program is to reduce the health and safety risks associated with home heating as well as prepare families for the expected scarcity of traditional heating fuels.

“The risks that families living on reservations face today is already much higher than those living off reservations,” said Joe Seidenberg, program director for Red Feather Development Group. “We expect those risks are going to be even greater when the coal mine closes. We see this as an opportunity to empower people to make informed decisions concerning how they heat their homes, hopefully resulting in better air quality and reduced energy costs.”

One major international corporation has taken the initiative to allocate resources to the solution by contributing to Red Feather’s efforts. Daikin North America manufactures efficient heating and cooling units that can replace wood and coal burning stoves, plus cool high desert homes in summer. They are designed to work with solar and battery systems for houses not connected to the grid, utilizing a patented “soft-start” technology that draws seventy percent less power than normal units.

“It’s in our corporate culture and our company’s interest to look at ways where we can assist communities in need,” said Daikin’s Matt Kroner. “Moving people over to clean energy will certainly affect the health issues at Hopi. Now we just need good partners like APS and the state of Arizona to help us find funding for these programs.”

Other initiatives being discussed include solar-based home heating technologies and transferring scrap wood from forest clearing programs in the Coconino and Kaibab national forests to Indian lands. Both would take a significant amount of money, and time, which most folks on the reservation don’t have.

Local government is getting involved, banding together with the US Forest Service for a potential solution. Representatives of the Forest Service, Coconino, Apache and Navajo counties and the city of Flagstaff recently met to devise a plan for deadwood harvested by area fire jurisdictions get directed free to the reservation community. Ann Anderson with Flagstaff Fire was one of the organizers.

“It was quite inspiring to see city, county and federal agencies, along with the Hopi and Navajo, sit down and develop a plan that could really have an impact,” she said.

Anderson believes the decision by the Forest Service to offer the wood resource free of charge is a huge motivator. Logistic and financial hurdles remain, however, and the plan is dependent on grant money.

“High levels of poverty and unemployment, geographic isolation and limited access to alternative fuels are creating an alarming situation for families to keep their homes warm during cold winter months,” said Red Feather’s Seidenberg. “Additionally, local woodlands are in short supply, and are likely to see an increase in harvesting and significant ecological harm. This is why Red Feather is investing resources into exploring culturally appropriate alternatives like solar furnaces that could supply supplemental heat and could potentially be manufactured locally.”

As the American public continues to demand the nation find more environmentally friendly forms of energy, it is important that they understand who is bearing the cost of the transition. Those living near the power plants and coal mines, often the very ones responsible for operating them, are the ones who have shouldered most of the environmental harm. Now they are being asked to bear most of the economic impact of losing their livelihoods and affordable heating fuels. Companies and individuals who have benefited from cheap energy will undoubtedly face upcoming opportunities, in their board meetings and at the polls, to balance the scales of social justice.