Hopi Chairman to tribal youth: ‘You have to have your voice heard. Your voice matters’ 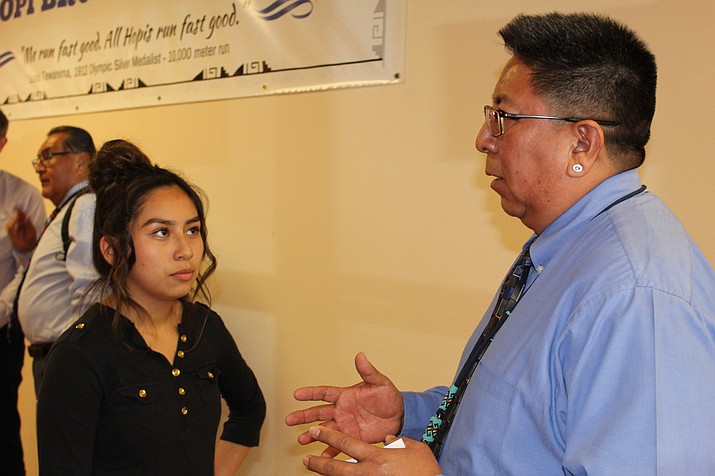 POLACCA, Ariz. — Hopi Chairman Timothy Nuvangyaoma told students that their voices matter during a speech to the students May 1 in the auditorium.

Hopi High student Olivia Adams felt it was important to hear this because she has been circulating a petition among students against changes in the Hopi Education Code that would form a school district on the Hopi Reservation. The changes would take some controls away from the local school board and local administrators.

Nuvangyaoma spoke with Adams after his speech and told her to take her message to the Hopi Tribal Council.

“I will make sure your voice is heard if you want to make a presentation (to the tribal council),” he told her. “Your voice matters. You have to bring the issue to the Hopi Tribal Council. You cannot be afraid.”

Nuvangyaoma said one benefit from having a school district would be a unified curriculum that is currently lacking.

“It’s (the proposed school district) still being discussed. The CSA’s (Community Service Administrators) want input and they should have input,” he said.

During his speech, Nuvangyaoma said he has held public forums from Moenkopi to First Mesa. He said their surveys showed that 100 percent of the Hopi people want more forums.

He said there are 14,000 Hopi tribal members and 11, 230 eligible voters, but only 1,611 voted in the last election. He said only 14 percent of those eligible voters voted because many Hopi’s don’t trust their government. Several Hopi High students shouted out agreement with this.

“You have to have your voice heard. Your voice matters,” he said.

Nuvangyaoma said the student’s voices are especially important because Navajo Generating Station is closing, which provides 80 percent of the Hopi tribal budget. The chairman wants to hear ideas on how the tribe can bring in more revenue.

Nuvangyaoma said a survey by the tribe showed 40 percent of Hopi people want more stores and food to bring in revenue and 14 percent support using some type of gaming for revenue. The other 44 percent had various ideas for bringing in revenue to the Hopi government.

Nuvangyaoma pointed to the Navajo’s success with Twin Arrows Casino and said that Hopi owns land in that area.

“Can you imagine us having something out there?” he asked the students.

Nuvangyaoma said the tribe could consider everything from casinos to coffee shops. Many students responded by raising their hands and yelling that they were in support of a tribal casino. Nuvangyaoma said he knows many of the students would like to work at a casino, but he warned them that many employers have drug screening.

“Some decisions that you make now may impact the future,” he said. “You can get a job in corrections out of high school making $30,000 (per year), but they will do a background check including drug screening.”

Regarding gaming, the chairman said 37 percent said it was a good idea, 27 percent said the Hopi Tribe should only lease gaming machines and 24 percent said gaming was not needed.

Seventy-eight percent said they wanted tribal council forums where the councilmembers could listen to their concerns. Forty-four percent want tribal council accountability on their votes.

Between December 2017 and November 2018, there were 81 council meetings, but only ten of the meetings had 100 percent attendance by the Hopi Tribal Council.

Nuvangyaoma said Hopi Tribal Council is aware that there are problems with drugs and alcohol, domestic violence and child abuse.

Nuvangyaoma said one of the priorities is the Hopi Arsenic Mitigation Project.

“We are drinking poison,” he said about the quality of water some places on the Hopi Reservation.

Another priority is the Lower Colorado River water adjudication.

“Water is life,” Nuvangyaoma said about the need for more water on the Hopi Reservation. “All we want to do is survive and build a culture.”

Nuvangyaoma told the students that they need to start fighting these bigger battles for the sake of their children and grandchildren. He said education is important, but Hopi has a rich history and the students should take pride in their heritage.

One of the Hopi High students asked the chairman if he can get all the changes done that he was talking about. Nuvangyaoma responded that he is not in this alone as he has a staff that helps.

Nuvangyaoma said despite NGS closing, Hopi would be okay for two years because of reserve funds. In the interim, the tribe continues to search for more revenue.

“Like Principal Fredericks said that the school belongs to the community so does the Hopi Tribal Council,” Nuvangyaoma said.