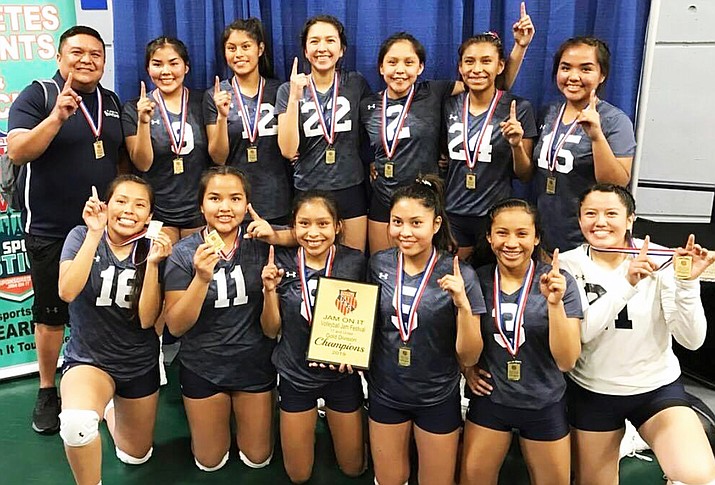 In their quest to the championship, the Starlings played six games during pool play and the tournament. In pool play, the Tuba City Starlings finished 3-0. They beat several teams from Arizona, Nevada and one team from Georgia. In their championship game, they played Vegas Select (25-16, 25-14).

The Starlings program had two teams at the tournament; they had a roster of 12 players in the 17s division that won the tournament championship for their division. The 16s division team was runner-ups in the Silver bracket.

Harlon Barlow, head coach for the Tuba City Starlings, said every tournament is a learning experience and they have learned that teams grow together when they win and lose.

“The win meant that we can be competitive wherever we go,” he said. “It takes a team to win these tournaments and everyone has their role on the team.”

He said there were several highlights of the tournament — one main highlight was that everyone had a chance to play.

“We had a few games where we started out close but [we] pulled through tough in the end,” he said. “I think we let the teams there know — our team can compete.”

Barlow said his team often participates in tournaments outside of their region in order to gain valuable playing experience that helps them improve.

“We won the 16s division last year. This year, we won the 17s division,” he said. “Outside tournaments allows us to see teams outside of Arizona and outside of our Arizona region schedule. We [play in] competitions that we don’t normally see during club and high school, which gives the girls experience playing at different levels of volleyball.”

April Clairmont, director of the Tuba City Starlings, thanked all the parents of the players.

“[Parents] are the heart and soul of our program. If it weren’t for their support, our achievements would not be attainable,” she said. “Each and every weekend, [parents] dedicate long hours and money driving to and from our club tourneys in Phoenix and the extra tournaments we enter not affiliated with Arizona Region but with AAU.”

Clairmont said winning the Gold Division in Las Vegas was a great accomplishment for Barlow and his team.

“With that, we are currently fundraising to attend the Aloha Summer Classic in Honolulu, Hawaii, to help [us] play in Hawaii,” he said.

The team recently held a Navajo taco fundraiser in Tuba City March 14 to help fund raise to participate in the Aloha Summer Class volleyball tournament scheduled June 14-16 in Hawaii. They are planning other fundraisers and announcements will be made via social media. They are also accepting donations for their cause as well.

“We are planning [more] food sales,” Barlow said. “We just don’t know the dates [yet]. The [recent] Navajo taco sale was great. We just need 10 more of those.”

Barlow said the Starlings volleyball program has given his high school team the much-needed experience of playing at a higher level and playing different teams with different skills.

This past season, Tuba City High School’s volleyball team finished a successful season with a perfect 10-0 region record, 14-0 conference record and 16-0 regular season record and 28-5 overall. They advanced to the final four of the state championship tournament but were eliminated by the eventual state champions.

One player, Jayda Chee, is thankful for the Starlings program and has been participating for eight years. She said the program has helped develop her skills in volleyball and over the years, she has seen the program grow from just one team to having nine teams.

“Volleyball is my passion. Any opportunity I get to play, I take it. I’m so grateful to have coaches willing to teach me what they know, so I can benefit and achieve my goals,” she said. “My team is amazing. The group of girls I play with and the bond we have is indescribable. We grew up together; they’re my sisters.”

Chee said the program has opened many doors for them. They get to travel to places they have never been to before. This summer, she said they plan to travel to Hawaii for a tournament.

“This past tournament was great. The experience and the teams we played helped us develop and grow on the court. I’m looking forward to winning more championships with my girls,” she said.

Barlow enjoys coaching volleyball and enjoys helping student-athletes develop their skills and dedication. He has been coaching the Tuba City Starlings team since 2010. He has coached the age groups of 14-, 16-, 17- and 18-year-olds within his years with the program. His assistant coach this year is Elijah Begay, who is new to the coaching staff this year.