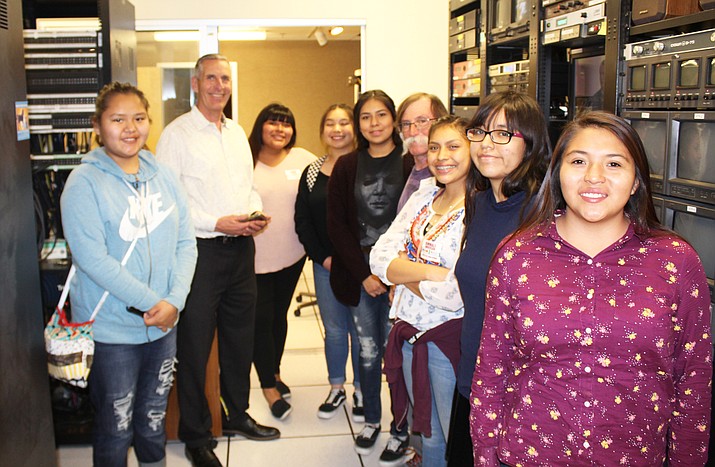 “I want to win one,” Anderson said.

Anderson may get her chance, along with six of her fellow Hopi High media students. Anderson learned about the Rocky Mountain Emmy Awards while touring KNOW TV, a cable TV station in downtown Phoenix.

Chuck Emmert, station manager of KNOW TV, also serves on the board that governs the Rocky Mountain Emmy Awards.

The student winners will get a pillar with their name on it. They will also be given the red carpet treatment, just like professional Emmy Award winners. High school students from Arizona, California, Utah and New Mexico compete to win these awards. There is also a category for college film students.

The Rocky Mountain Emmy Awards will take place at Scottsdale Resort in September, complete with tuxedos. The student entries will be judged on content, creativity and how their films were executed.

Emmert told the students to submit their best work, which they can enter for free.

The Emmert led a tour of KNOW TV included showing them everything from equipment, such as a mini Mac computer that is used for video editing, to the studio that is used for interviews. The studio had a huge green backdrop with incredible lighting.

Julian Paras Jr., a sports broadcast major at Cronkite, is working on an internship at KNOW. Emmert told students that internships often lead to jobs.

“All of our programs are positive content for TV,” Emmert said.

Anderson said the visit to KNOW TV taught her that there are a lot of resources for those who want to get into filming as a career.

“It was a good TV station. It seemed small, but you can see how closely they interact,” she said about the staff at KNOW TV.

Anderson said she is excited about entering some of her videos for the Rocky Mountain Emmy Awards.

“It will be good for my resume, good experience and something big,” she said.

Jacque Thorpe, a video student at Hopi High, said the trip taught her that she is interested in video as a career, especially working with the equipment.

“After visiting KNOW, I learned I want to work in the media area. It showed me if I want that then I can do it. I liked the editing rooms. I can see myself there. The green room was ‘wow.’ On TV, it looks cool,” she said.

Thorpe said the Rocky Mountain Emmy Awards is a good opportunity for students.

“If they end up winning, they know they have talent,” she said about the student film competitors.

Amber Labahe, a video and print journalism student at Hopi High, said KNOW TV was cool because it had its own software for editing.

“It made it feel like home the way it was laid out. The big green room was beautiful,” she said.

Labahe said the Rocky Mountain Emmy Awards is a good opportunity for those who want to push themselves.

“Everybody who likes video should take the opportunity,” she said.

Aubrey Harvey, a print journalism student at Hopi High, said KNOW TV was cool because it was huge, especially the big green room. She also liked that they had different furniture for different shows. She said the Rocky Mountain Emmys is a good way of congratulating video students for their efforts.

Dalilah Tsosie, a radio student at Hopi High, said it was interested how KNOW works all their controls and performs their editing.

“The green room was curved at the bottom so it doesn’t look like it’s at an angle,” she said.

Tsosie said the Rocky Mountain Emmy Awards sounds interesting and fun because it deals with competing with photos and video editing.

“It’s a chance to show professionals what you can do. If you get an award it would be a great memory,” she said.

Latifah Huma, a print journalism student at Hopi High, said it was good to see what Emmert uses for his TV shows and the large green room where they hold their interviews.

She said the Rocky Mountain Emmys is a good opportunity for video students to show what they can do.