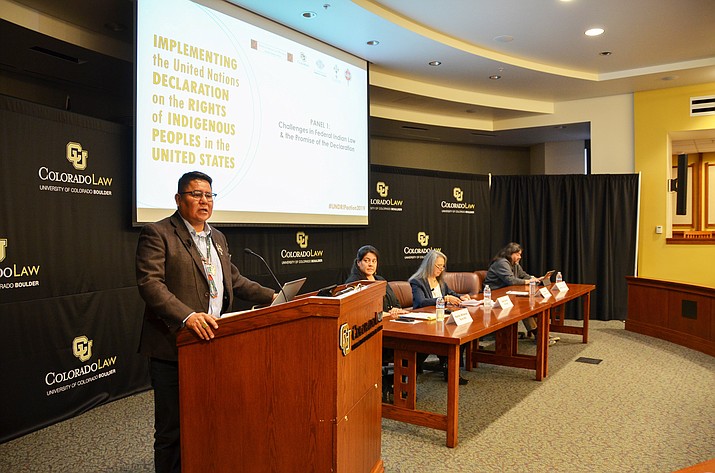 Delegate Nate Brown (Chilchinbeto, Dennehotso, Kayenta) delivered remarks to the Implementing the United Nations Declaration on the Rights of Indigenous Peoples in the United States Conference at the University of Colorado Law School. (Navajo Nation Office of the Speaker)

Delegate Nathaniel Brown delivered remarks to the Implementing the United Nations Declaration on the Rights of Indigenous Peoples in the United States Conference at the University of Colorado Law School.

Brown has represented the Navajo Nation at the United Nations in several forums.

“We have our Navajo people all over the world, not just on the reservation. Outside our sacred mountains are our people working in the military and in education. We know [UNDRIP] would be an additional protection,” Brown said.

By focusing on the implementation of UNDRIP, the Navajo Nation can highlight UNDRIP’s principles to advance the Nation’s interests, Brown said.

He emphasized the importance of preserving traditional Navajo cultural practices and Diné Bizaad. He also offered a prayer for those who traveled to the meeting through treacherous winter weather.

“We use the four directions, the sacred mountains, the water. Those are the things we can’t change. That is our way of life. UNDRIP recognizes our way of life, honors our language, honors our territories,” Brown said. “In this day and age, there’s an assault on Navajo people, on indigenous people. There’s an assault on our cultural teachings, on our land, on our language.”

In June 2017, the Naabik’íyáti’ Committee passed NABIJN-50-17, which supports the Navajo Nation Human Rights Commission in requesting the United States government to fully implement the UNDRIP and the American Declaration on the Rights of Indigenous Peoples.

“The Navajo Nation requests the full implementation of the UNDRIP, especially as it relates to free, prior, and informed consent,” Brown said. “Who knows us better than ourselves? We have a lot to the share with the world. The only way to do that is to have a seat at the table. And UNDRIP facilitates that.”

During his remarks, Brown highlighted work the Nation and its partners are doing to address the issues related to Missing and Murdered Indigenous Women and in supporting Navajo LGBTQ communities.

He thanked Delegate Amber Kanazbah Crotty for her work and noted a forthcoming white paper on human trafficking on the reservation. Carla Fredericks, the director of the American Indian Law Program and Indian Law Clinic at the law school, is working with the Nation to complete the white paper.

“To come together as a human race is to acknowledge the beautiful differences that we hold. UNDRIP affirms our right to practice our ways of life and supports our ability to exercise our sovereignty,” Brown said.