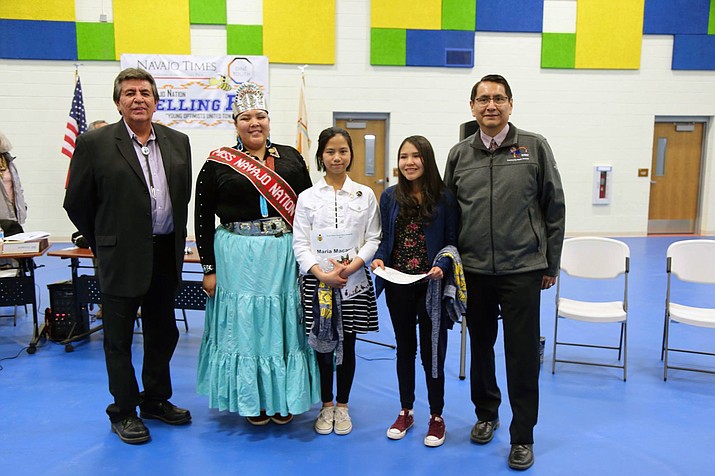 Spelling bee champion Kelly Haven, an eighth-grader at Tséhootsooí Middle School in Fort Defiance, will continue on to the Scripps National Spelling Bee competition in Washington, D.C., in May. This was Haven’s third consecutive win as the Navajo Nation Spelling Bee champion.

Tuba City’s very own, Maria Lucella Macaraig, a seventh-grader at Tuba City Junior High School, was the runner-up and gave the defending champion a run for her money in a battle that lasted 107 rounds. Macaraig, as the runner-up, will be the alternate competitor for the national competition representing the Navajo Nation.

The competition included 50 of the best local spellers in grades four through eight, 10 students from each of the five Navajo agencies according to Nathaniel Natonabah, senior counselor for the Navajo Nation’s Office of Diné Youth.

Vilma C. Macaraig, a language arts teacher at Tuba City High School and mother to Maria, explained the grueling championship round between Haven and her daughter lasted forever.

“The champion Haven is a three-time Navajo Nation champion and had to go 107 rounds with Maria before she finally won the title,” she said. “Both did an excellent job which resulted in judges running out of spelling words and resorting to choosing spelling words randomly from the dictionary.”

Maria said the championship round was extremely difficult because they used other words that were not part of the list of words provided by Scripps and she said “it was hard and difficult.”

Overall, Maria is proud of her accomplishments and feels confident for next year’s competition.

“I feel really proud of myself— that I've gone this far. I studied every day since winning the sectionals. I did a lot of reading and studying words,” she explained.

She said her entire family helped her study for the competition and they were the ones that tested her constantly. She is already looking forward to next year’s competition and she plans to study throughout the year. She thanks her parents and her older brother for their dedication to helping her study and she knows they will be there for her in the upcoming year as well.

Macaraig said she is extremely proud of her daughter and of the winner, Kelly Haven.

“The winner Haven was very good and she had a hard time winning over Maria. I’m proud of my daughter and also proud of Kelly, this will be Kelly’s last year in the competition,” Macaraig said.

Macaraig explained that her daughter has always been a good speller and attributes her spelling to her daughter’s love for reading. She also said her daughter has competed off-and-on in the spelling bee for several years. Maria won the regional spelling bee for Western Navajo Agency in kindergarten, second grade and again in fourth grade. She returned back this year after a three year hiatus and won the regional championship for Western Navajo Agency.

She also said reading is the key to her daughter’s success.

“I ask her to read, because reading helps a lot — it starts with reading before anything else,” she said.

Navajo Nation President Jonathan Nez was present at the competition and offered words of encouragement, and he, along with Miss Navajo Autumn Montoya, presented each participant with a certificate of recognition for their outstanding achievements.

“She did an excellent job representing Tuba City Junior High School and orthographically battled it out with the returning champion,” said Bilagody.

Maria’s parents are both teachers at Tuba City Unified School District, are both of Filipino descent and are international teachers. They have lived in Tuba City for eight years.

Macaraig said they are preparing for next year’s competition already and they are all looking forward to the 2020 Navajo Nation Spelling Bee.

According to the Scripps National Spelling Bee, spelling bees are significant competitions and activities that help students improve their spelling, increase their vocabulary, learn concepts and develop English usage that will help them all their lives.