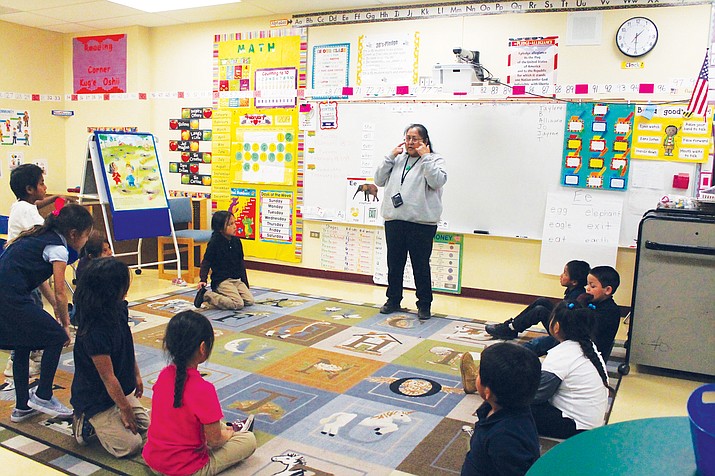 FLAGSTAFF, Ariz. — The preservation of the Apache language and culture at San Carlos Unified School District #20 continues to be an effort by school officials and administrators.

The school board recently approved a new salary schedule for teachers and staff for the 2019-2020 school year that includes higher pay for Apache language and culture teachers certified by the San Carlos Apache Tribal education department. The approved school board action, a 5-0 unanimous vote, provides Apache language and culture teachers at the school district with pay on the same base and salary scale as all other Arizona Department of Education state-certified teachers within the school district. Dr. Deborah Jackson-Dennison, superintendent, was thankful of the board’s action.

“[The action] certainly demonstrates [the board’s] support and value for this direction and revitalization of the Apache language and culture as an urgent need that has been long overlooked as equally important to the future of the San Carlos Apache people,” she said.

Durena Thompson, a governing board member, expressed her thought in support of the school board’s action as well.

“I am pleased that the school district has moved forward with this decision, as teaching our Apache language is just as important as teaching academic subject areas,” she said. “I have always considered Apache language teachers as equal to all teachers — as what they teach is priceless.”

This move by the administration was an important stance taken to help preserve language and culture. In 2010, there were an estimated 13,063 Apache speakers of varying dialects in the country and statistics show a drastic decreasing trend in indigenous language use. Numbers suggest that younger generations are not learning the languages, which may lead to the extinction of some languages, according to a four-year report by the U.S. Census Bureau. Dennison explained the heart of this systematic reform includes revitalizing the Apache language and cultural values by integrating and correlating within the high-stakes standards being taught within all public schools in Arizona.

“One promising initiative is the new kindergarten immersion class implemented this school year through a partnership with the San Carlos Apache Tribe’s education department and the Native American Languages grant awarded from the U.S. Department of Education in 2017,” she said.

Dennison explained the school district is undertaking a systematic approach to the necessary reforms required to bring improvements academically for the predominantly 1,400-plus San Carlos Apache students served in pre-K and K-12 districtwide. In 2016, this improvement process began by establishing a new mission statement for the school district with feedback from parents, grandparents and local leaders.

Dennison said the mission and vision were designed to work together to serve as the foundation for the school district’s strategic plan, “Empowering our N’nee People the Brave Way.” She said through this process, just about every aspect of the system is reviewed in-depth to consider what has worked and what has not worked.

“One area [that] is always important [in] improving the system for student success is teacher recruitment and retention, which encompasses the teacher salary scale and other benefits offered,” Dennison said.

Dennison explained they must recognize the certification of the tribe’s education department as equal to the state certification in order to recruit culturally knowledgeable and fluent speakers of the Apache language and to also encourage young people to become such teachers.

“Schools across the country, including Arizona, are held to rigorous assessments and standards, such as AZMerit and common core, it can sometimes seem less important to teach indigenous languages and cultures, but it’s just the opposite,” said Dennison.

“The time is now for schools and leaders responsible for serving the population of American Indian students in our country, who continuously have the lowest academic performance and highest dropout rates as compared to all other ethnicities,” she said in response to confronting brutal facts.

She said we can “no longer simply conform to that, which hasn’t worked for generations of teaching American Indian students.”

Dennison explained as schools across the country continue to be required to implement research-based education reforms under the Every Student Succeeds Act (ESSA), the opportunity in now for the integration, correlation and alignment of the indigenous cultural values, beliefs and wisdom with such research.

Dennison said we need “to finally bring about genuine relevancy, a sense of belongingness and finally ownership of the otherwise foreign school systems that have not been successful for well over a century.”