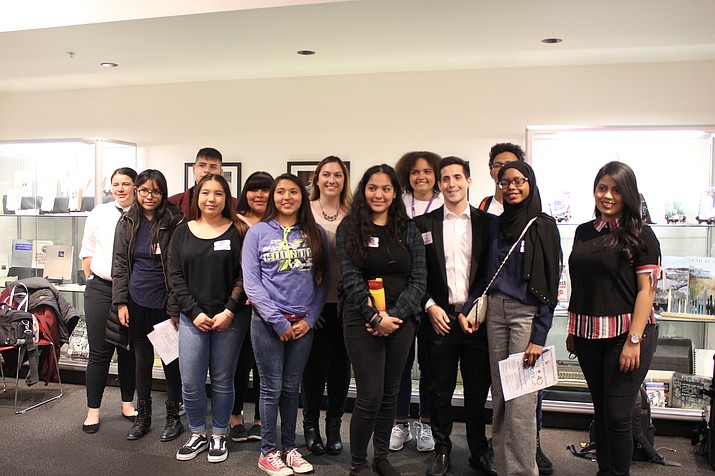 Vanessa Ruiz, Southwest Borderland Initiative director and professor of Practice at Cronkite, told the students she hopes they walk out of the conference finding their passions and their voices. She said the students could explore their passions by being authentic, proud, having courage and working hard.

Ruiz urged the students to take risks. She said enrollment at journalism schools has increased.

“This is one of the best times for journalism,” she said.

Ruiz said diversity and inclusion is important because it brings different perspectives to journalism. She said the students should surround themselves with people who encourage and support them.

“It’s okay to be afraid. It’s okay not to know. Explore and have fun,” she said.

Richard Ruelas, a reporter with the Arizona Republic and AZ Central, gave the students pointers on how to write their stories, telling them to include the five w’s and how. He told them to write down quotes and if they are at a news conference they should not be shy and should ask questions. He said the lede sentence should be a summary of what was most important and not more than 35 words.

Ruelas said the way to think about a lede is if a friend asked what the event was about, then what would you tell them. He said news stories are written in descending importance with quotes interspersed and no opinions given by the writer.

After Ruelas gave his pointers, the students attended two news conferences and then had to write about one or the other during a journalism contest.

The bill, as proposed, include:

1-Arizona voters have the right to register without unnecessary barriers;

2-Arizona voters have the right to participate in fair elections in which politicians aren’t choosing their own voters;

3-Arizona voters have the right to vote by mail or in person and know that their vote counts;

4-Arizona voters have the right to equal access to the ballot no matter where they live, what language they speak or what their physical abilities are;

5-Arizona voters have the right to enact laws that impact them when politicians refuse to act; and

6-Arizona voters have the right to know that the people they elect will work for them rather than donors or lobbyists.

“We need to protect our democracy,” she said.

Rep. Teran said same day voter registration should also be available. She told the students that they need to connect with their legislators to let them know where they stand on issues.

She also applauded the Arizona Red4Ed movement, which brought raises for public school teachers. She said parents, teachers and support staff are now more involved in educational issues because of this movement.

“I have a three year old and I worry about where he is going to go to school,” she said.

The second news conference was about a play co-written by playwright Marcelino Quinonez and former Arizona Attorney General Grant Woods. In this play, one of their characters defends President Trump while the other character denounces Trump’s stances.

Woods also spoke about freedom of the press.

“All of the amendments are important, but there’s a reason why freedom of the press is the First Amendment,” he said.

Cierra Brady, a print journalism student at Hopi High, said she learned how to write ledes by listening to Ruelas.

Brady said the news conferences were interesting because they talked about voting rights and the political climate with the current president.

Jacque Thorpe, a video student at Hopi High, said the pointers by Ruelas was extremely helpful. She said the news conferences were interesting, but it was hard to keep still for such a long time.

Kimmale Anderson, a video student at Hopi High, said she learned from Ruelas that there is a certain way to write a good story

“The story has to flow together and he gave us tips on how to do that with a lot of details,” she said.

Anderson said the two news conferences were good because she didn’t know about Latino voting rights.

“I could relate to her because she was outspoken,” she said about Rep. Teran.

Aubrey Harvey, a print journalism student at Hopi High, said she was impressed about learning how stories are formatted.

“I learned what questions to ask,” she said.

“They mentioned all the bad things that Trump is trying to do,” she said.

Lataifah Huma, a print journalism student at Hopi High, said Ruelas gave good information about writing stories that she didn’t know. She liked both news conferences because they gave facts about what they do for their jobs.