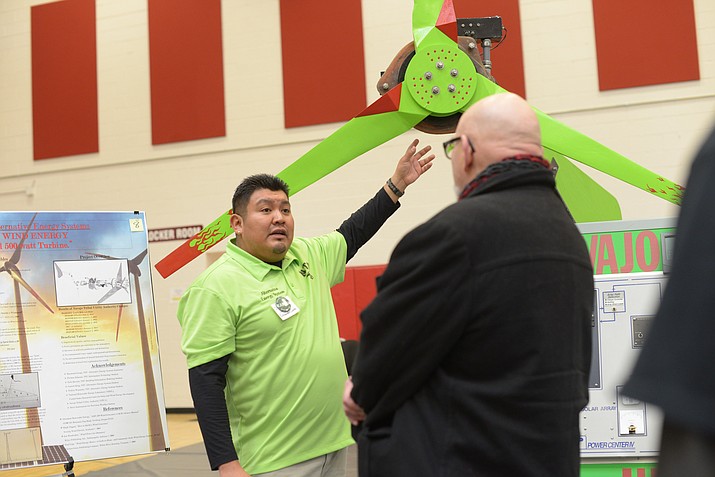 In total, 14 research posters were on display at the event that featured the work of over 20 students. The competition was evaluated by four judges representing NTU’s faculty, staff, and engineering advisory board.

Energy Systems major Rashaundal Combs and Biology major Robinson Tom received the highest evaluations from judges and were awarded a certificate and $200. Combs, who will be graduating in May, pursued a project that analyzed the various factors involved with harnessing naturally occurring winds to generate mechanical power into electricity. Combs’ research was explored on a small-scale for home owners, and encouraged a hybrid system using a 500-watt wind turbine and 200-watt solar panels to lower monthly utility bills.

Biology major Robinson Tom explains his research on how aqueous-based lithium batteries would benefit a soldier in the battlefield. Tom served in the U.S. Army as Infantry from 2010 to 2014 and did one tour in Afghanistan. (Navajo Technical University)

Tom’s research also focused on energy and involved fabrication and electrochemical studies of electrodes and aqueous gel electrolytes for light weight, non-flammable lithium ion batteries for U.S. Army soldiers in the battlefield. Tom, a veteran of the U.S. Army, indicated that soldiers rely on rechargeable battery-based equipment to complete missions, but the weight, packaging, and flammability of current lithium ion batteries comes with a risk. His research advocated for a shift to aqueous-based lithium batteries, which would allow for more charge-discharge cycles and higher capacity.

“It was difficult for us to maneuver freely during patrols, and they take up space,” said Tom of the conventional batteries that were used during deployment. “Those of us who had to power electric equipment that was vital to the mission had to carry an excessive amount of batteries because the capacity wasn’t that great. They would lose their charge in a short time. That was a safety concern for the soldiers.”

Elbasheena Allen, an environmental science and natural resources major, placed second in the competition while exploring Traditional Ecological Knowledge (TEK) and the correlation of Diné traditional names for months with current climate realities.

According to the U.S. Fish and Wildlife Service, Traditional Ecological Knowledge is the evolving knowledge acquired by indigenous and local peoples over hundreds and thousands of years through direct contact with the environment. Allen used TEK as a baseline to gauge how the seasons have shifted in regards to nesting and planting seasons and measurements of precipitation and altitude.