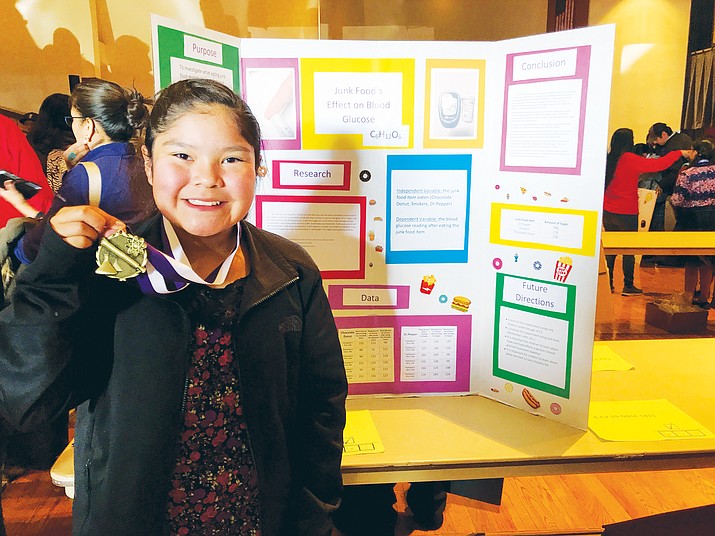 Miara Bilagody, a sixth-grade student at Tuba City Elementary School, poses with her second place medal in the biology category at the conclusion of her competition at the Navajo Nation Science Fair Feb. 27 in Church Rock, New Mexico. (Joshua L. Butler/NHO)

The three-day competition attracted 64 schools from across the Navajo Nation, 858 science projects and 911 students, according to Allan Blacksheep with the Navajo Nation Department of Diné Education.

Blacksheep explained the first place winners of the Navajo Nation Science Fair qualify to participate in the Arizona Science and Engineering Fair the statewide science fair, scheduled April 4-5 in Phoenix.

According to the Arizona Science Center, this competition provides thousands of dollars in prizes and scholarships. The grand award winners in the senior division from the state level fair will be selected to compete at the Intel International Science and Engineering Fair May 16 in Phoenix.

Blacksheep also explained the tribe has been hosting the science fair for more than 20 years and it’s a way to promote education, particularly in the areas of math and science. He said they hope schools will in turn increase efforts to teach more science in their school curriculums.

“The Navajo Nation Science Fair strives for students to apply more research-based project entries while applying the scientific method process and engineering design process,” he said. “The science fair also encourages the incorporation of the Navajo culture and environment into projects and research. The main goal of the science fair is to recognize and reward teachers working with students with research year-round.”

Blacksheep said the science fair gets better and better each year, and he said he has seen an increase in submitted science projects this year.

“Our students have represented Tuba City Jr. High well and have promoted their individual leadership and presentation skills,” she said. “It can be intimidating to present in a room full of other students who all want to place. Our students have done an excellent job — congratulations to the winners and their families.”

McCabe said many people contributed to the success and participation in the local and Navajo Nation science fairs. He thanked the Tuba City Unified School District, all the schools, parents, teachers and bus drivers. He also thanked the Navajo Nation for hosting the annual science fair and he said he is looking forward to next year’s competition.