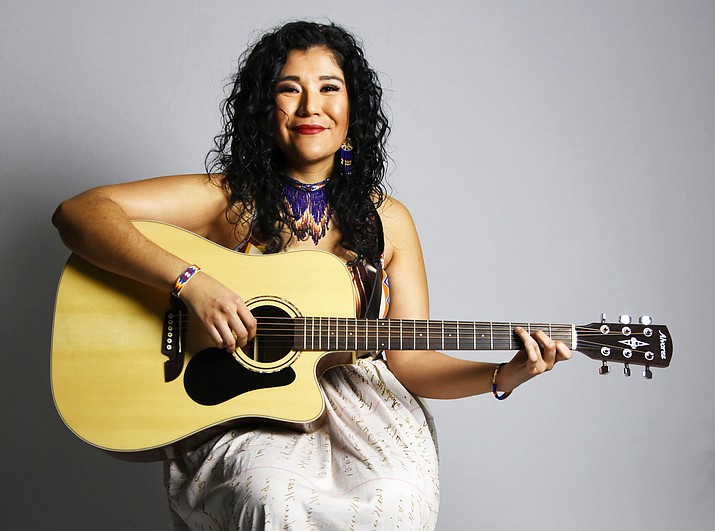 Poet, educator and motivational speaker Tanaya Winder recently released an EP "For Women and Girls on Fire" in which she continues to inspire Native youth in communities across the country (Photo/Viki Eagle)

FLAGSTAFF, Ariz. — Poet, educator and motivational speaker Tanaya Winder knows the power of words and now with a new EP “For Women and Girls on Fire,” she is exploring the power of the spoken word.

Winder was raised on the Southern Ute reservation in Ignacio, Colorado and is an enrolled member of the Duckwater Shoshone Tribe, her background includes Southern Ute, Pyramid Lake Paiute, Diné and Black heritages.

She is the founder of Dream Warriors, an indigenous artists management company that manages artists including Tall Paul, Mic Jordan and Frank Waln, some of whom collaborated with her on the EP.

The album adds to her two books of poetry “Words Like Love” and “Why Storms are Named After People but Bullets Remain Nameless.”

Some background — why poetry? 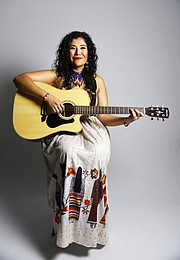 Winder said her grandfather passing away her senior year of high school moved her on a path to become a poet. Her grandfather had wanted her to go to Stanford and a teacher gave her permission to take his class — a spoken word poetry class.

“That’s just when I started really realizing the power of poetry to help process pain, to try to remember all the things I didn’t want to forget about my grandfather,” Winder said.

Along with an Intro to Poetry class, where she got to sit, read and reflect, Winder realized those classes were unlike calculus, where something is right or wrong.

“With poetry, it was just however you interpreted it,” Winder said. “And looking back, that just feels more indigenous to me, the way you relate to things and how it relates to you. There’s no right or wrong answer.”

Winder said she was touched by a poem called “One Art” by Elizabeth Bishop. The first line is “The art of losing isn’t hard to master.”

Winder said the poem talks about loss and how there are no rules to loss — losing time, procrastinating, losing a loved one — those things all happen without rhyme or reason, which Bishop said is poetry — to take something with such set rules to explain something that has no rules. The tension is where poetry happens, Winder said.

“I always relate it back to life,” she said. “I think that’s how people are. We have our forms, we have the bodies we were born into and our content is always changing. The stories of our lives, who comes in and out of it.”

Instead of becoming a lawyer, which is what Winder set out to do, she decided in her sophomore year to switch to English, which was a hard decision.

“It’s hard to honor that, coming from our communities,” Winder said. “You’re supposed to be a doctor, lawyer or engineer. We’re supposed to do these things to help better our communities. When I was growing up, it wasn’t really visible that you can do art. You could sing or you could do art and that could help your people, too. That could also be medicine.”

When one of her best friends committed suicide, Winder didn’t realize the statistics — that suicide is the second leading cause of death for Native youth.

“I wasn’t aware of all those things,” Winder said. “But I now know, as an educator, but, losing my friend, I didn’t realize he was part of a larger epidemic of suicide. Poetry really was what helped me survive during that time in college.”

She discovered more of that through attending graduate school at the University of New Mexico and working with Joy Harjo. That decision released her from graduate schools where she would be told what poetry was and how to write it in strict forms.

Winder said she was criticized for telling and not showing in her poetry.

“As indigenous people, we tell stories,” Winder said. “That’s how we speak and I want to write how I speak. I really wanted to write some thing that a middle schooler could read, or high school students I work with could read, all the way up to elders in my community … something they could all read and understand. I wanted them to be able to connect to it.”

For Women and Girls on Fire EP 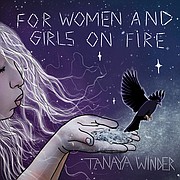 Winder called herself a page poet before deciding to take the plunge into adding singing and spoken word to her work.

She worked with Native youth for her full-time job and it was because of them that she embraced a new form.

“I feel like my work is adapting to the needs of the people I’m surrounded with,” Winder said. “With my kids who I work with, they like hearing things, they like spoken words. I wanted to try and transition to that.”

She made contact with Frank Waln, a Sicangu Lakota rapper (Winder is his manager).

“He would always open his performances talking about uplifting indigenous women and wanting me to open the space,” Winder said. “He would always let me share my work at the beginning and that was just awesome to help me build up my confidence and just performing in front of people.”

That experience gave people a chance to connect with her poetry in a new way — one they hadn’t been taught in school.

“Hearing it at a hip hop concert, hearing a spoken piece, they would like it,” Winder said. “It’s so interesting because I would sell more books at Frank’s concerts than doing one poem or two poems at a bookstore reading for a whole hour. It was nice to be held by an indigenous man and uplifted by indigenous people who had come to the concerts and that just really helped me want to write more and more.”

She talks with the kids who she works with asking them questions she never got asked —‘what makes you happy? What do you want to be good at?’

“I want to be somebody who walks my talk,” Winder said. “What makes me happy? What do I want to be good at? I’ve always loved singing and growing up in ceremony, growing up in the sweat lodge, I’ve always been singing. That’s just always just what made me feel most alive and most free. Why did I get away from that?”

Winder realized poetry is almost like lyrics and that she should try it and see if she could write songs.

“I love writing music and that EP is going to be important in showing that transition from poetry to music,” she said.

Winder’s work, both spoken and written, emphasize the importance of heart work, which she says is the ability to transform beyond the spiritual scars that try to keep one bound in darkness.

Through her work with Upward Bound, which Winder attended when she was younger (she is now the director of her program), she got to meet Native people from other tribes, states and school and create long lasting friendships.

She wrote a song, “Pray for You,” for the students she is in charge of at Upward Bound at Colorado University, Boulder.

“They go through so much and I see how much hurt and harm comes from parents choosing alcohol or drugs over their kids and parents even choosing partners over their kids, boyfriends or girlfriends. It just really damages the kids’ spirts in such profound ways that I don’t think parents are even aware of.”

Winder emphasizes that she does not think the parents are bad, they are struggling too.

“I think about my own mom and she was younger than me when she had me,” Winder said. “I can’t imagine having my own children just yet. It is hard work and we’re all just trying to work on our healing. I wrote that song for the students to give them more sources of light, so they could see the light in themselves.”

She brought Waln back to perform for the students later in the year and she said they loved him and after that, she and Waln started performing together more. She met Mic Jordan at an event for Missing and Murdered Indigenous Women in Fargo, North Dakota. Lyla June and Tall Paul also make up some of Dream Warriors.

“Everybody cared about wanting to make music and performances that could appeal from babies all the way up to elders… and to do workshops when we can and never forget about the youth,” Winder said. “It is really amazing to build something where we can be just really intentional.”

Intentional meaning both Upward Bound and Dream Warriors think about the Native youth first by making sure the kids know they have a right to say no, to not have their pictures taken, to not have their bodies touched in ways they don’t want — to give them power where they might not have had any. Part of that is having counselors present when they perform or when they are in a community talking to kids about things that may trigger them.

“That just really helps me strengthen Dream Warriors, to know that whenever we enter communities, we’re not doing any harm,” Winder said. “If you share your sad stories, are you just opening up kids? But who is responsible for taking care of them once they are open? We just try to take care of everyone the best we can.”

More information about booking Dream Warriors or about Winder's work is available at tanayawinder.com.