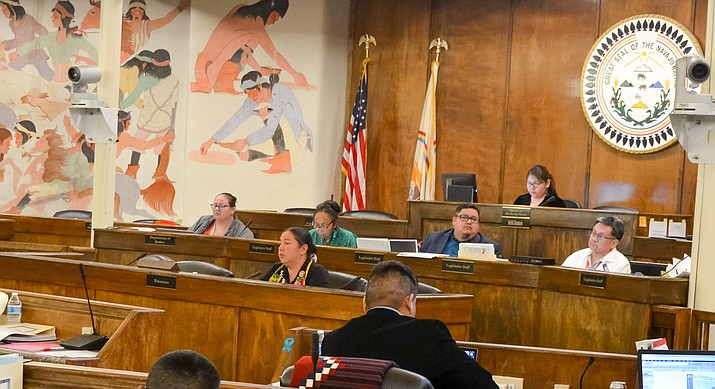 WINDOW ROCK, Ariz. — Members of the 24th Navajo Nation Council held its Naabik’íyáti’ Committee Feb. 28 to consider the first legislation of its term and to receive reports about various issues surrounding the Nation.

Legislation 0032-19 supports New Mexico Bill 278, which creates a Missing and Murdered Indigenous Women Task Force that would study how to increase state resources for missing and murdered Native women and to identify barriers to address the program, among other directives. The bill has an emergency clause, and it would appropriate $100,000. The state bill is currently in line to be considered by the N.M. House Appropriations and Finance Committee.

“Navajo Nation continues to lead the charge in three states and the national level regarding this issue,” Crotty said. “The data is sparse and we know some of the challenges, so we want to endorse this in all three states.”

Legislation 0033-19 is a similar bill and is making its way through an Arizona House committee.

And, Legislation 0034-19 supports a Utah resolution that designates May 5 as Missing and Murdered Indigenous Women, Girls, and LGBT+ Awareness Day. Crotty intends to reach out to Navajo Division of Social Service’s Strengthening Families Program to organize an awareness march that day.

Legislation 0019-19, a bill requesting the U.S. Dept. of Veterans Affairs to establish direct services on the Navajo Nation was referred back to the Health, Education & Human Services Committee for further consideration. The referral motion received a 13-5 vote.

Council members also approved reports by Lucinda Martin, health administrator for the Navajo Dept. of Aging and Long Term Care Support, and from Damon on the Navajo Generating Station and Navajo Transitional Energy Company. After the report, committee members voted 10-9 to meet in executive session for further discussion.