WINDOW ROCK, Ariz. — Leaders for Navajo Nation committees were announced during the first month of the 24th Navajo Nation Council. 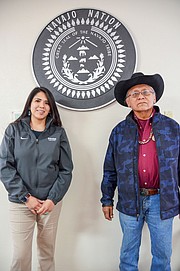 “We go forward to assist the divisions and the departments within our oversight, as well as the 638 entities. We look forward to working with the school board associations, post-secondary institutions of the Navajo Nation, as well as the American Indian Higher Education Consortium,” Tso stated.

After the committee meeting, Vice Chair Tso provided a statement on her selection. “I will be advocating for all: children, adults, and seniors. I will be working with my committee members to figure out the right approach to tackle education, scholarships, mineral health impacts, elder abuse and care, gender equality, LGBTQ community rights and equality, meth and other substance abuse, and most importantly, our veterans,” Vice Chair Tso said. “We will proceed with transparency, diligence, efficiency and of course, the guidance of our constituents’ voices.”

Two legislations requesting direct services from the US Dept. of Veterans Affairs and the establishment of veterans’ facilities on the reservation were considered. After reviewing the legislations, which were sponsored by Council Delegate Key Allen Begay, Jr. (Low Mountain, Many Farms, Nazlini, Blue Gap/Tachee, Tselani/Cottonwood), the committee took two actions.

Three confirmation appointments passed the committee unanimously, advancing them to the Naabik’íyáti’ Committee for consideration.

Council Delegate Edmund Yazzie (Churchrock, Iyanbito, Mariano Lake, Pinedale, Smith Lake, Thoreau) was also nominated for chair but lost by a 3-2 vote. He was similarly nominated for vice chair but failed consent by a 4-1 vote.

“Anybody that knows me can attest to me being very much by the book,” Charles-Newton said. “Sometimes the law needs to be defined or corrected. Sometimes it needs to change with the times. I think that is where our leadership should stand.”

She brings experience to the committee as a former Navajo Nation prosecutor and as a law librarian where she did legal research for lawyers, judges, and university professors.

On the committee’s agenda were two confirmation legislations which were passed unanimously by the committee, advancing them forward to the Naabik’íyáti’ Committee.

Legislation 0017-19, a measure consenting to the appointment of Doreen N. McPaul as the attorney general, is sponsored by Delegate Yazzie.

The Budget and Finance Committee (BFC) selected its chair and vice chair to lead the committee for the next four years. 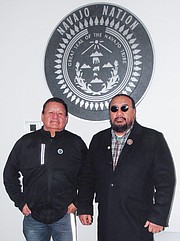 Henio added that he’s looking forward to working with his fellow committee members, and he encourages them to approach their roles with an open mind and to consider “outside-the-box” ideas that may benefit the economic future of the Navajo Nation.

“I’m excited to be named chair and I feel really blessed to have the confidence of my committee members to be their chairperson,” Henio said. “As a committee, we need to look at the needs of the present without compromising the ability of future generations to meet their own needs.”

Navajo Nation Council Speaker Seth Damon (Bááháálí, Chichiltah, Manuelito, Tsé Lichíí’, Rock Springs, Tsayatoh) said he was looking forward to the discussion the committee would have, and that each member had the qualities to be chair or vice chair.

“We needed proactive individuals to be a part of this committee,” Damon said. “Members of this committee and its leadership are going to need lots of foresight for moving the 24th Navajo Nation Council forward.”

Council Delegate Amber Kanazbah Crotty (Beclabito, Cove, Gadi’i’áhi/To’Koi, Red Valley, Tooh Haltsooi, Toadlena/Two Grey Hills, Tsé ałnáoz’t’I’í) was also nominated to be chair of the committee but lost consideration by a 4-2 vote. She addressed her peers with strong ideals the committee needed for its leadership.

“We have a very clear purpose; we are the body that provides guidance to the Council and government on our financial makeup, and what is our recommendation to make a strong financial source for the Navajo people,” Crotty said.

BFC members analyze and make decisions on the Navajo Nation’s finances, which include an “all-in” approximate annual budget upward of $800 million. They also provide oversight of numerous funds, including investments totaling approximately $5 billion.

In order to be as informed as possible, the committee scheduled orientation presentations with various Navajo Nation Government agencies to gain a better understanding of their processes, scope of work and the impact the committee’s oversight will have.

The six-member committee is planning orientations with the Office of the Controller Feb. 28, and with the Department of Justice, Office of Management and Budget, and the Office of Legislative Council the following March 8.

“I look forward to helping the RDC work fairly, and we’re really doing this for the whole Navajo Nation,” Nez said.

He added his leadership strategy is to take a “Captain D” approach, which is making good Decisions, being Dedicated, having a Desire to serve the Nation, and to have Determination.

Both candidates were nominated by their peers to be chair, initially, but the secret ballot selection revealed a tie vote. In the end, Delegate Walker Jr. addressed the committee giving up his run for chair and said he was doing it diplomatically to promote good will and positive relationships.

“It was a special kind of gesture between two leaders,” Walker Jr. said. “It was also about letting the committee and the public know we can all work together, rather than always contesting and challenging each other.”

Walker Jr. was the only person nominated to be vice chair. Once the leadership pair’s names were amended into Legislation 0029-19, the main measure passed unanimously.

Legislation 0009-19 requests consent for Dr. Rudy Shebala to be confirmed as executive director of the Division of Natural Resources. It is sponsored by Council Delegate Herman Daniels, Jr. (Shonto, Naa’tsis’áán, Oljato, Ts’áh Bii Kin). The measure passed by unanimous consent.

Legislation 0011-19 requests consent for Garret Silversmith to be confirmed as division director of the Division of Transportation. It is sponsored by Council Delegate Mark Freeland (Becenti, Crownpoint, Huerfano, Lake Valley, Nageezi, Nahodishgish, Tse’ii’ahí, Whiterock). The measure passed by unanimous consent.

Legislation 0012-19 requests consent for Dr. Pearl Yellowman to be confirmed as division director of the Division of Community Development. It is sponsored by Delegate Freeland. The measure passed by unanimous consent.

Legislation 0027-19 requests consent for Christopher Becenti to be confirmed as executive director of the Navajo Nation Telecommunications Regulatory Commission. It is sponsored by Council Delegate Nelson S. BeGaye (Lukachukai, Rock Point, Round Rock, Tsaile/Wheatfields, Tsé Ch’izhí). The measure passed by a 4-0 vote. Vice Chair Walker Jr. was excused from voting to tend to an emergency matter in his home community.

To help RDC members learn more about the committee’s responsibilities overseeing various Navajo Nation departments, programs, and enterprises, the RDC scheduled a series of two-day orientation workshops for the next several weeks leading up to the Navajo Nation Council Spring Session.


Information provided by the Navajo Nation Office of the Speaker