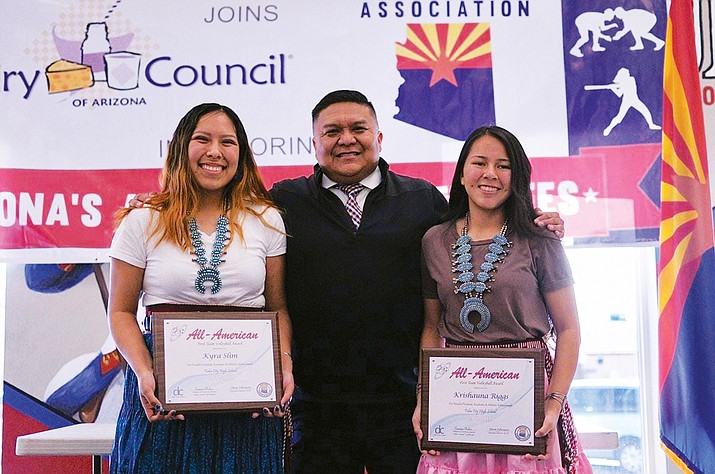 Two of its members, Krishauna Riggs and Kyra Slim were recently honored with the All-American First Team volleyball awards by the United Dairymen of Arizona and the Arizona Coaches Association during an awards ceremony Jan. 19 in Queen Creek, Arizona.

Riggs, 17, is a senior and plays defensive specialist and her teammate and fellow honoree Slim, 17, is also a senior and plays opposite side hitter. They helped their team to a perfect 10-0 region record, 14-0 conference record, 16-0 regular season record and 28-5 overall. The team advanced to the final four of the state championship tournament and were eliminated by eventual state champions Northwest Christian.

Riggs said she is still shocked and happy of the prestigious honor.

“I’m honored because I’ve heard so many talented players have [received] this award and it’s very competitive to get this award,” she said.

Riggs said she was recently accepted to five colleges but has her eye on Washington State University where she wants to study zoology. She hopes to one day be able to travel around the world to help save endangered wildlife.

Her teammate Slim is also happy and thankful.

“It’s a really great honor to receive the All-American award, all four years of volleyball was worth it!” she said. “It made all our practices and late nights at the gym worth it!”

Slim said her favorite games of the season were against their region rival, the Lady Mustangs of Monument Valley High School. She said “MV was definitely [their] biggest rival.”

She said the experience of receiving the All-American award was even more special because she received the award with one of her best friends. She explained they endured a lot through their four years playing together

“Krishauna has always been a fireball. Her height doesn’t define her, she’s fearless on the court and her competitive spirit is what drives her,” he said. “As a libero, defensive specialist, her goal was never to let that ball drop.”

Barlow explained Slim has compassion for the game.

“She [Slim] grew and learned throughout the years to earn a starting position her senior year,” he said. “She was the one who always pushed [the] girls to go to the weight room, do fundraisers, open gym. She was the one who influenced [teammates] to participate in events. She [has] great leadership skills.”

Barlow said the honor for the students means so much because it is difficult to attain.

“You’re in a pool of girls who have 4.0 and higher [GPAs], which includes service hours of over 500-plus community service hours,” he said. “To get two [honorees] in the last two seasons, it means that we have great examples in our community, especially coming from Warrior volleyball.”

Potential honorees also need letters of recommendations from the head coach and two school administrators within the school as part of their application process.

Barlow explained the highlight of the season was defending their undefeated region record and winning the regional tournament, and finishing in the final four of the state tournament.

Both players have many people to thank.

Riggs thanked her parents because they drove her long distances for practices, they paid her fees and they supported her throughout the years. She also thanked her coach Harlan Barlow for teaching her all the techniques and for pushing her to improve. She also thanks her teammates and she said they “were family on-and-off the court.”

Slim thanked her family and said, “I thank my family because without all their support, none of this would be possible.” She also thanked coach Barlow for pushing her past her limits. She said she played for Barlow for five years, including the Starlings program.

Riggs and Slim are both Navajo tribal members.